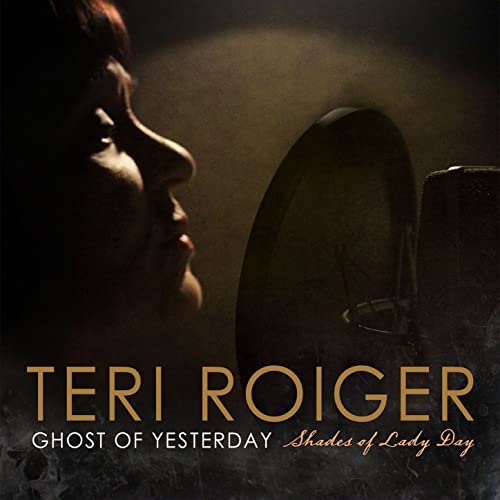 Teri Roiger is a gifted singer, pianist, lyricist and composer. Noted for using her rich contralto vocal instrument to bring sophistication and depth to her performances, Teri has conceived an album that celebrates the many dimensions of Billie Holiday’s legacy by exploring the range of emotional shadings in her legendary music.

The euphoria, heartache, sensuality, strength, and vulnerability of the great Lady Day are all to be found on GHOST OF YESTERDAY, whether in the form of standards she made popular, songs she wrote, or original compositions about her, as is the case with the first track, “Lady Day and John Coltrane”– an inspired twin tribute to the genius of both Billie Holiday and John Coltrane and the power of their music to melt away stress and remake the world with each listening. The song is no mere mash up of styles but a cleverly conceived hybrid that reveals and revels in the surprising common ground between the two.

“Ghost of a Chance,” first recorded by Bing Crosby but later immortalized by Ms. Holiday, showcases  Teri’s ability to project energy and understatement simultaneously. For her re-imagining of the 1935 megahit “What a Little Moonlight Can Do,” Teri channels Billie while contemporizing the song with a fresh arrangement that remains true to the sensibilities of the original. Next up is an affectingly somber rendition of the Great American Songbook favorite “You Don’t Know What Love Is,” followed by a lushly reverent version of Lady Day’s own eternally sublime composition from 1939, “Fine and Mellow.

Teri then turns to that magical year of 1939 for a contemporary jazz take on Billie’s classic “Them There Eyes,” a heartfelt “It’s Easy to Remember” by Rodgers and Hart, and a pleasantly laid back cover of “Do You Know What It Means To Miss New Orleans,” complete with a trumpet homage to Louis Armstrong, who played on the original recording. “Lady Day,” a seldom-heard composition with original lyrics by Teri, tells the Billie Holiday story with an upbeat and at times triumphant instrumental background. The title track, “Ghost of Yesterday,” was written for Billie and is another quintessential standard, as is “These Foolish Things.” The album finishes with the bittersweet, end of career Holiday classic, “Lady Sings the Blues.”

The multi-faceted brilliance of Billie Holiday is served up sizzling hot by the multi-talented Teri Roiger – a match made in jazz heaven. I have listened to this album dozens of times, and every time I hear something different, a testament to Teri’s brilliant arrangements and scintillating performance. She has made a contribution, not only by honoring a jazz luminary in Billie Holiday, but her album will serve as a compass for future songwriters and performers wanting to evoke beauty and radiance through their  music. Brava!