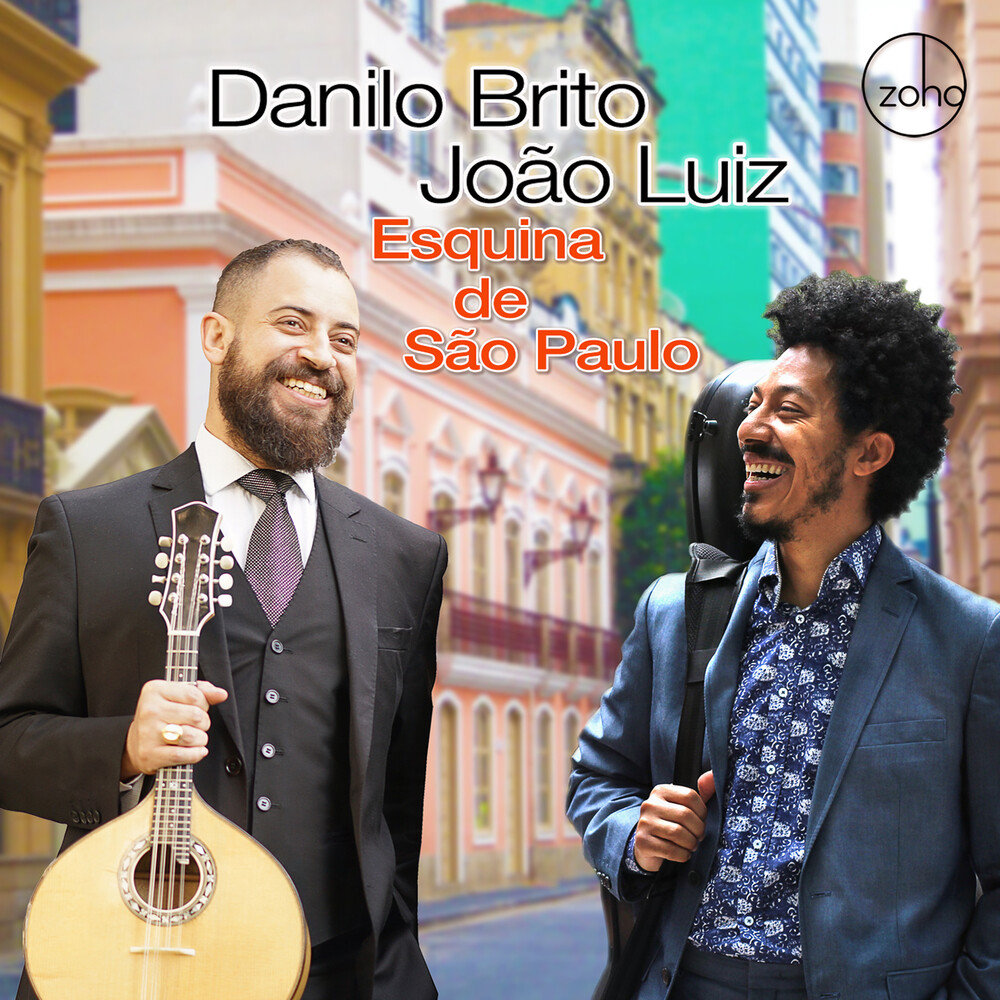 When stars come together, an album like this is born. João Luiz and Danilo Brito are both master musicians in their own right, playing music at the highest level. A virtuoso of the popular music of his native Brazil, guitarist Luiz began playing professionally during his childhood and was later trained in classical guitar by his mentor, Henrique Pinto. He has collaborated with the likes of Yo-Yo Ma, Paquito D’Rivera, Sérgio Assad, Leo Brouwer, Egberto Gismonti, Bridget Kibbey, and Clarice Assad. He’s also an integral member of the New York creative community as Director of chamber music at CUNY Hunter College.

Danilo Brito is a genius on the mandolin and an authority in Choro. He is also a celebrated composer and arranger. Choro has the same cultural parents as jazz and blues. European forms melded with African ideas to produce a family of fresh, new forms throughout the New World – marked by virtuosity, syncopation, counterpoint, and improvisation with an intense expression of feelings, from cheerful to melancholy.

João Luiz and Danilo Brito first met in 2004 at the Prêmio VISA Music Award. Though it was a quick encounter, Brito was able to “see the brilliance of João’s playing.” Brito continued, “I realized that he had the sound of a classical guitarist but was full of the Brazilian swing of popular music.” Years later, in 2017, they performed together at Jazz at Lincoln Center in New York. “The energy was so good that we went on a tour the next year,” said Brito.

You can hear their energy and magnetism on Esquina de Sao Paulo (“Sao Paulo Street Corner”.) You can also hear their friendship. The repertoire came from options Brito showed João that came from that first performance in NY, when he was a featured guest, and the duo’s tour the following year. Brito had made some home recordings and sent them to João. Of course, João was duly impressed and rendered them anew afrwith his arrangements.

Gargalhada was composed by Pixinguinha in 1917 for flute. It is a Schottische, a European dance genre, but it has strong Brazilian characteristics and feelings. This is clearly an advanced piece, with its progressive sections moving from delicate to dynamic. Brito and João move through the number with precision and heart.

The title track Esquina de São Paulo appears for the first time on this album. It plays as a tango initially but turns into a waltz in parts B and C. The title refers to the old serenades made by inspired musicians such as Francisco Mignoni, a great Brazilian pianist composer who characterized his romantic waltzes as “valsas de esquina” which we can translate as “street corner waltzes.” The interplay between Luiz and Brito is on full display in this number, as they seamlessly move between sections with dexterity and grace.

Feia is a waltz by Jacob do Bandolim originally recorded by the author in 1948, which later received a new recording with grand orchestra. “Feia” means “ugly” in feminine, as “waltz” [valsa] in Portuguese is a feminine word.

Salsito no Choro is a groove-oriented selection that has its first recording on this album and was inspired by the duo’s performance with Paquito D’Rivera in New York. The title “Salsito” is a mashup of the words Salsa and Paquito.

The duo’s upbeat Benzinho is a choro by Jacob do Bandolim that he first recorded in 1955 and then again in 1961. This rendition is exquisitely arranged by João, and the performance evokes a romantic, hopeful vibe.

Despertar da Montanha is a composition by Eduardo Souto that some identify as Brazilian Tango and others as Fado-Choro. It’s a kind of Tango that’s very different from Argentinian Tango. This is an elegant, more pensive piece where we can experience the strings become heartstrings, evoking feelings of warmth and nostalgia.

Primas e Bordões is a Choro by Jacob do Bandolim that has been rarely recorded. There is an audio clip from a TV show in 1965 with the song. That is the version that everybody knows. It’s radiant and Brito wanted to highlight it. Parts A and B are Brito’s mandolin solo and João comes in for part C.

Perigoso is by Orlando Silveira, the Brazilian accordionist, conductor and composer. Choro music can be technically difficult. Composers create “challenges” for the musicians, which demand a lot from them. Certain pieces are “dangerous” to play. So, this may be an explanation for the name “Perigoso.” It has a winding melody that is difficult to play.

Chovia by Brito is a melancholic waltz composed in a moment of inspiration and introspection on the balcony of an apartment while it was raining on a gray afternoon in São Paulo. The melody flowed easy and within five minutes the song was ready, almost the same duration of this piece. It was originally recorded in 2008 on the album Sem Restrições

Not only is this an album of incredible merit, it’s also a testament to friendship borne through music. That these two remarkable musicians have come together to render such a masterpiece is a shining example of collaboration, camaraderie, and creativity. It has been an honor to help produce this project with them.