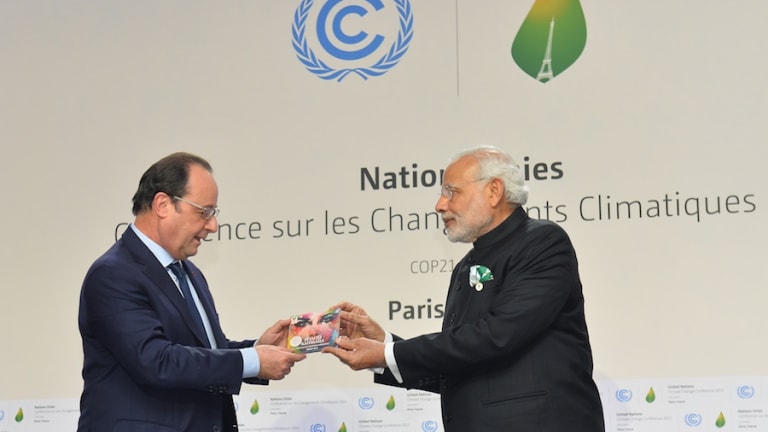 He doesn’t have super powers. But Narendra Modi, India’s Prime Minister, is trying to save the planet.

Modi is currently on his fourth official trip to the United States and today he will be in Washington, D.C. addressing Congress. Among the many topics he will mention are the economic interdependence of the United States and India; and the need for the U.S. to keep supporting India’s bid to join the United Nations Security Council. And then there is the topic for which Modi is making quite a name for himself: the environment.

Because India is in the midst of rapid industrialization, you might expect Modi to shy away from environmental accords or reforms, not wanting to dampen his country’s economic growth with regulations. But Modi realizes that India is the third largest emitter of greenhouse gasses, after the U.S. and China. Because he has been so outspoken on protecting the environment and has already introduced many domestic reforms, Modi is being heralded as an important global voice on environmental issues. By helping to protect the environment in India, home to 1.3 billion people, Modi is in effect trying to save the planet.

That’s typically a job reserved for super heroes — like Captain Planet, the star of the eponymous television show in the early 1990s. Here are three ways in which India’s prime minister is like the action hero:

1. The Power of Multilateralism

In the television series, five teenagers or “planeteers” from different continents possess five magic rings that activate different parts of nature, from the earth and wind to water. When all five rings activate at the same time, Captain Planet appears to save the day. The message: Pollution is a global problem and requires an international response.

Despite some reports of loosening regulations, Modi has largely been part of the global response. He issued a plan to curb India’s greenhouse emissions in late 2015, which was a seminal shift from India’s previous administration that took a hard line stance against climate change policies. Modi’s plan calls for an increase of India’s solar power target by four times, which is a welcome development, as 70% of the country’s energy is derived from coal. Modi calls the plan “ambitious but achievable,” as the entire reform agenda could cost $2.5 trillion over the next fourteen years. Modi is hoping international and domestic investors will see the light and join his cause.

As part of the global response, just yesterday Modi vowed to sign the Paris climate accord this year. The accord goes into effect when countries with over 55% of worldwide emissions agree to it. And with Modi signaling his intent to sign, the accord is all but certain to be adopted (as China and the U.S. have already agreed to the deal). “India’s role was significant and it’s unlikely that we would have actually reached an agreement in Paris had the Indians not stepped up and shown leadership,” said the White House press secretary.

2. The Power of Water

In the Captain Planet television show, the planeteer who hails from Asia, Gi, is a marine biologist who has the power to control water. And that’s exactly what another important Asian is calling for — controlling and conserving water.

In a recent radio address, Modi called upon fellow citizens to conserve water to prevent drought. “We must feel the pain if even one drop of water is wasted…. Let us promise ourselves that this June, July, August and September we will not allow even a drop to be wasted,” he said. In the same address, he noted that India’s water infrastructure was aging. He cited water tanks that are two hundred years old. He praised Indian railways for transporting water to regions that are experiencing drought. He also encouraged people to join the already thirty-year long process of cleaning the Ganges River.

3. The Power of Heart

One of the planeteers is from Brazil and wields the power of “heart,” the ability to convince others to care about and have sympathy for the planet. The message here is that the people of the world need to rise up and get serious about protecting the environment.

Here too, Modi has demonstrated leadership. In September 2015, Modi invited Ricky Kej, a distinguished composer, to his office to congratulate the artist on his recent Grammy Award for his album Winds of Samsara. During their meeting, Modi and Kej discussed many issues, but Modi kept returning to the topic for which he has a great passion, the environment. “We looked at each other and decided — let’s make an uplifting album that increases environmental consciousness,” said Kej. And that if Kej made such an album, Modi promised that he would launch it at the COP 21 Paris conference.

Kej returned to his recording studio in Bangalore and got to work, composing several tracks that are inspired by the earth, wind, water, and all organic life. Because the earth is shared among people from every country and culture, Kej’s album Shanti Samsara became a gathering point for over 300 musicians from all over the world, including 12 Grammy winners, as well as special guests like Amitabh Bachchan, Soweto Gospel Choir, Tibetan Monks from the Sherabling Monastery, and even a spoken word passage by Shinzo Abe, Prime Minister of Japan. The album is indeed a tribute to Mother Nature, and is also an important and timely missive to mankind: Listen to this music, and remember that we are stewards of planet earth. True to his word, Modi presented the album to French President François Hollande in December 2015.

Kabir Sehgal is the author of New York Times bestseller Coined: The Rich Life of Money And How Its History Has Shaped Us and producer of Shanti Samsara and wrote its liner notes. He is also a Grammy winning producer. Follow him on Facebook and Twitter.