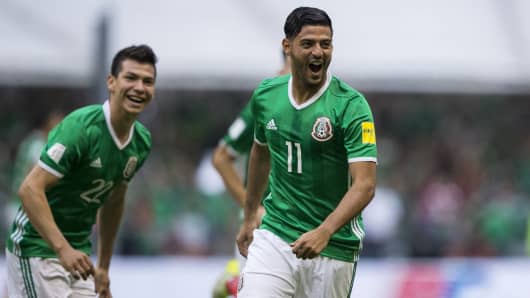 The 2018 World Cup kicks off on June 14 in Moscow, as Russia faces Saudi Arabia in the inaugural match.

But before any players take the field, another contest will be settled the day before: members of FIFA will decide on June 13 which country will host the 2026 World Cup. The two contenders are Morocco and the United States, Canada, and Mexico, which have submitted a joint bid.

The North American proposal says that the U.S. would host 60 games, whereas Mexico and Canada would each host 10 games. There are 23 cities under consideration as locations for matches. All told, a North American World Cup would last 32 days.

While FIFA members should ultimately vote their conscience, they ought to recognize not only the many advantages of holding the event in North America but the strong message that it would send:

First, a North American World Cup would be a much-needed symbol of international unity, in a time of increased isolationism. Ever since Donald J. Trump descended to the Trump Tower lobby on June 15, 2015 to declare his candidacy for the presidency, there has been a cloud over US-Mexico relations.

“The joint 2026 bid enjoys the support of 74 percent of Americans, 76 percent of Canadians, and 83 percent of Mexicans, according to a recent survey.”

As a candidate, Trump castigated Mexican immigrants, and he threatened to rip up the North American Free Trade Agreement (NAFTA), the economic pact shared by the US, Mexico, and Canada. As president, Trump hasn’t backed down.

Neither have those who are running for the presidency of Mexico, which will have an election on July 1. Andrés Manuel López Obrador, who is leading in recent polls, has derided the Trump administration as “irresponsible neofascists.”

Despite the political rancor, the shared bid for the World Cup is perhaps the only thing that the US, Mexico, and Canada can agree on these days. Donald Trump, President Enrique Peña Nieto of Mexico, and Prime Minister Justin Trudeau of Canada all support the joint attempt for the games.

In characteristic fashion, Trump threatened other countries into supporting the bid on Twitter, to which Nieto responded “soccer unites us.” Even the usually fractious US House of Representatives overwhelmingly passed a resolution in support of the bid 392 to 3.

A North American World Cup would be the first time that the games are hosted by three countries, and it would send the message to the world that it’s important to look past political differences.

Second, the World Cup would highlight the shared prosperity of the three countries. The 2026 games is projected to create 40,000 jobs and generate more than $5 billion in economic activity, according to a study by the Boston Consulting Group.

Each host city might make between $90 million to $480 million in earnings. “The United 2026 bid represents the largest commercial market in the world, offering the opportunity for substantial economic and social benefit for our host cities and for FIFA,” said Yon De Luisa, who leads Mexico’s efforts in the joint bid.

It’s refreshing to see the three countries on the same side and dribbling towards the same economic goals. As much as you hear about the negative effects of NAFTA, this agreement created the largest free trade zone in the world and has tripled trade to $1.2 trillion among the three countries per year. A “NAFTA World Cup” would awaken more to shared fortunes of our three nations.

Third, a North American World Cup would reflect the will of the people. The joint 2026 bid enjoys the support of 74 percent of Americans, 76 percent of Canadians, and 83 percent of Mexicans, according to a recent survey.

Selecting these three democracies, over the constitutional monarchy of Morocco in which the king retains significant power, would send the signal to the world that societies should be open, inclusive, and free.

In 2026, the United States will commemorate its 250th year as a democracy, and a joint World Cup would also shine the bright stadium lights on America as a beacon of freedom and diversity, as millions have come from around the world and found success in the US.

A NAFTA World Cup represents a tremendous opportunity to put Americans, Canadians, and Mexicans on the same squad. Let’s hope that FIFA doesn’t show it the red card.

Commentary by Kabir Sehgal, author of the New York Times best seller Coined: The Rich Life of Money And How Its History Has Shaped Us. He is a former vice president at JPMorgan and Grammy-winning producer. He recently produced the album “Argentina vs. Uruguay: Instrumental Interpretations of Football.” Follow him on Twitter @kabirsehgal.