1. Why are you a music historian?

I am actually a music historian (Beatles, Nirvana, Garbage, Traveling Wilburys); a consultant to TV and Movies (Beatles Get Back; George Harrison: Living in the Material World) and a multi-award-winning, best selling author of non-fiction, music history and mysteries (Mysteries in the Music: Case Closed; The Beatle Who Vanished; Nevermind Nirvana).

The Beatles are my principal musical inspiration. However, there are so many more. Mainly in the classic and alternative rock genres.

I practice my Uke every day. Mostly rock songs. Tom Petty has a lot of cool 4 chord songs I like to play.

4. Why did you write this book? 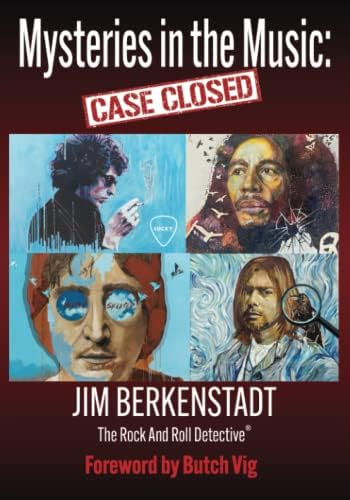 Mysteries in the Music: Case Closed
By Jim Berkenstadt

The goal was to create a book that would once and for all Close the Case on the many myths, legends and conspiracies in rock and roll. Who really discovered Elvis Presley? Did the CIA Kill Bob Marley? Did the Beach Boys steal a song from Charles Manson? And many more.

5. What were the biggest obstacles in writing this book?

The biggest obstacle in writing the definitive book to solve rock’s biggest mysteries is to find eye witnesses still alive and willing to talk to me.

6. Who is featured in the book?

People featured and interviewed in my book include: