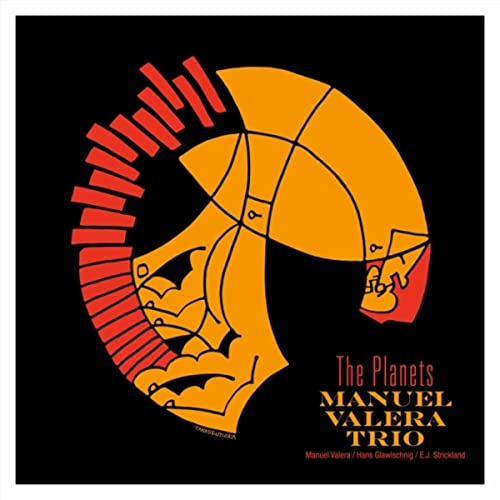 Commissioned by Chamber Music America/Doris Duke 2017 New Jazz The Planets Manuel Valera’s Works program, draws upon and interprets the wisdom of late Russian composer and conductor, originally published in 1947, Thesaurus of Scales and Melodic Patterns Nicolas Slonimsky whose became a seminal opus for musicians, composers, and educators. The likes of Arnold Schoenberg, Freddie Hubbard, and John Coltrane cogitated Slonimsky’s analysis of pandiatonic progressions, double notes, and palindromic canons. Valera assumes the mantle of understanding and translating this iconic work for a new generation. By so doing, Valera becomes a prophet of our time, serving as an inspired evangelist of a once arcane yet timeless music theory manual, and elevating it again to the pantheon of creative literature. Indeed, Slonimsky’s work is to music what Strunk and White’s is to grammar. Elements of Style, Valera incorpo Thesaurus can be traced to The Planets

While the melodic and harmonic material on rates a thematic device which serves as the organizing principle of the album. Almost every piece is named for a celestial body, a planet or star in our galaxy. Valera, a sparkling pianist, improviser, and composer, tries to characterize each planet with an impressionistic rendering: not just drawing upon cosmology and astronomy but mythology. He invokes Roman myths to personify each composition, to awaken them with life, and in turn, fashion them into something contemporary and meaningful. It’s a lofty goal: Valera isn’t just shooting for the moon. He is going for infinity and beyond. And if there wasn’t a limit to how many hours the studio was booked, Valera would still be there, with his capable partners Hans Glawisching on bass and E.J. Strickland on drums. The trio grooves, dashes, fades, and runs with a single mind, as if there’s a gravitational force locking in the groove. There were few if any fits or spurts during the session. This group is on the same proverbial page.

Since antiquity, philosopher kings have looked to the stars for meaning and inspiration. Today’s scientific community navigates general relativity of the galaxies and the quantum mechanics of the atomic world to explain the human perception of reality. But ultimately, looking up at the stars is looking into the past, as light finally reaches us after hundreds of lightyears in transport. By channeling the past spirits of planets and stars, Valera has given us an opus for the here and now. – You’re listening to a dazzling triumph of an album that will be reckoned with by future genera was to the music world just Interstellar Space is to today what Coltrane’ The Planets tions. Valera’s decades ago.

Valera isn’t just a star but supernova of talent, intelligence, and grace. And his music will convince you that as you look into the blackness of space, there are discernible and universal vibrations of sound that will envelop you fully and without warning.