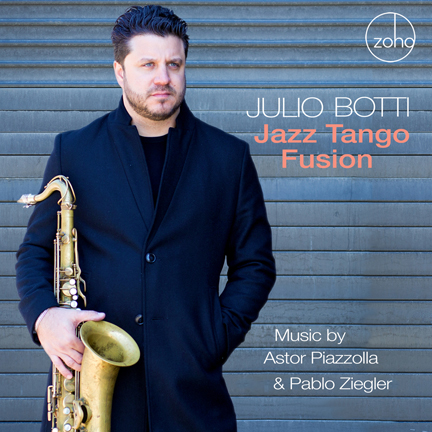 Jazz Tango Fusion is indeed the name of this terrific album, and it’s also a fitting description of its creator Julio Botti. Born in the Cordoba region of Argentina, Botti began playing the saxophone at an early age, eventually moving to the United States in 1998, where he studied with the likes of Donny McCaslin. Throughout his impressive and itinerant career, he has traveled from Cuba to Spain, learning different art forms and taking his music in new directions. His most storied recording collaborations are with maestro Pablo Ziegler, releasing “Tango Nostalgias” in 2013 (ZOHO ZM 201305) and “Sax to Tango” in 2016 (ZOHO ZM 2016057, both of which earned LATIN GRAMMY nominations for Best Tango Album.

This release showcases Botti’s growth and maturity as an artist, as it juxtaposes compositions from tango masters Astor Piazzolla and Ziegler with Botti’s own signature pieces. The full repertoire presents an edgy, colorful, and thoughtful reimagining of modern tango, moored both to the rhythms and tonalities found in jazz and tango. And that is the charge of Nuevo Tango – to push ahead with the music and explore new avenues with which to take the art. What’s more, this album blends the traditional soundscape of tango with electric guitar, Hammond B3 organ, Fender Rhodes piano and drums, a breath of modernity.

To bring these compositions to life, Botti assembled a remarkable quartet that features him on tenor and soprano saxophone; Andrew Baird on guitar; Eduardo Withrington on keyboards; and Tiago Michelin on drums. Each bandmember sparkles with virtuosity and brilliance.

Imágenes 676 comes straight from the Piazzolla songbook, a vintage tune that many tango artists have performed over the decades. This fine arrangement by Ziegler is itself a fresh take on the composition. It lends itself well to Botti’s skill as a performer, as he seamlessly plays the intricate melodies, followed by a terrific free improvisation section for the quartet. Tango Blues, a Botti composition, pairs the melody of tango with a more traditional jazz and blues structure. The minor blues features Juampy Juarez, a guitarist from Buenos Aires, as a soloist.

Libertango is Piazzolla’s most well-known composition. Yet Botti performs it in an unusual manner, with a somber and perhaps even melancholy rendering over a ? meter. Botti took inspiration for this arrangement from Wayne Shorter’s “Nefertiti” in which members of the band restate the melody in their own unique way. Because this song is so familiar, Botti’s rendition showcases his adventurous spirit, and how far he’s willing to go to reinterpret tango in new ways. Botti is indeed at the vanguard of the music, playing and performing with a personal freedom that is altogether inspiring to witness.

Michelangelo 70 is also a Piazzolla piece into which Botti’s quartet injects verve and vitality. This performance blends the brilliance of the original arrangement with the freshness of guitar distortion, and a larger and more combustible drum set. The band plays with infectious intensity that keeps both them and the audience dialed in.

Celtic Feast is a composition by Ziegler that Botti recorded on his first 2013 nuevo tango album “Tango Nostalgias”. This is a more updated approach, as Botti uses a pedal board to switch between different saxophone sounds, presenting bright sounds to re-imagine the melody and solo in new directions.
Chin Chin is one of the best demonstrations of jazz fusion on the album, introducing a unique and dynamic sound of a Wahwah pedal on the guitar introduction paired with Botti’s terrific improvisation. The piece evolves into a section in which solos are traded, eventually culminating with Eduardo Withrington’s emotive piano cadenza that sounds more like Weather Report than vintage tango. And that’s just the point, taking the music in a new direction.

Milongueta is by Ziegler, and Botti has recorded it previously and is thus intimately familiar with it. This version adds a modern sound with Withrington on Fender Rhodes and a sizzling drum pattern by Michelin. Upper West is composed by Botti, fashioned in the “new tango” style. He wrote the piece when he lived in this neighborhood of Manhattan. Using the standard AABA form found within jazz, Botti injects the sounds with allusions to the noise (and music) of street life found in El Barrio, also known as Spanish Harlem. 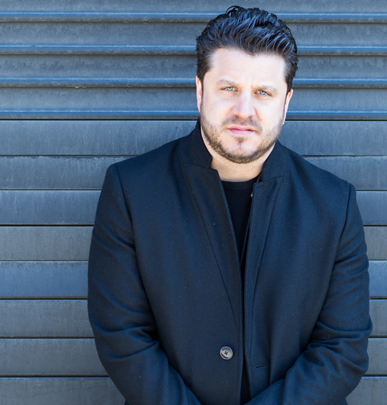 Ballad for Agustin is dedicated to Botti’s childhood friend who tragically died of cancer almost two years ago. He was a brilliant alto saxophone player. Botti’s friend enjoyed listening to David Sanborn and the Brecker Brothers, so this piece incorporates allusions to these master musicians. Botti even attempts to emulate how his friend Agustin performed on the sax. The piece is a beautiful tribute to a friend with whom Botti was close.

“Jazz Tango Fusion” is an impressive production that features repertoire that is both vintage and contemporary, performed with alacrity and virtuosity. Maestro Botti is taking his front line place in the Nuevo Tango movement. He has made a seminal contribution as a performer, composer, and conceptual artist. It has been personal highlight to help produce this special recording and to collaborate with Botti, who has become a tango master in his own right.