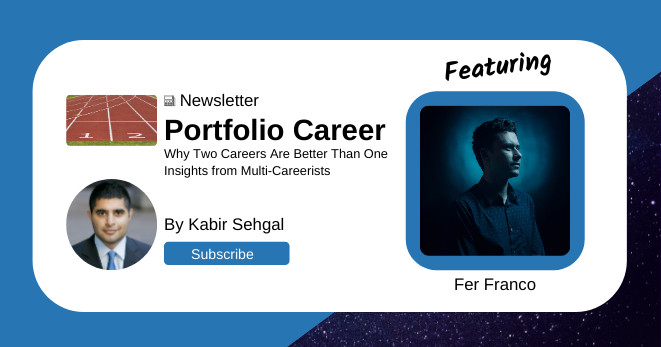 Meet Fer Franco. He is a dazzling multi-careerist based in Guatemala who has professions in many fields. He is a teacher, performing artist, music and film producer, while also having an established career in real estate. He has an unusual story which is both refreshing and illuminating. Below you’ll find his reflections on his multifaceted career.

On his motivations for having many careers

Big motivators for me are curiosity and variety. I truly enjoy having a wide range of interests and careers, my days are usually filled with different types of activities and I am extremely fortunate to have colleagues working in industries such as film, music production, acting, technology, education, design, etc. This means I am constantly learning about multiple perspectives and sometimes my days (pre-pandemic) included radio interviews, teaching a class, assessing a project, and ended with a gig or studio session.

Another important motivator is the goal of diversifying income streams and having the independence to produce music that truly interests and inspires me. I heard advice from Derek Sivers where he suggested that the happiest people were those who had an artistic practice that was financially independent from their livelihood. Freedom is a huge guiding principle in my life, and is something I strive for through a portfolio career.

Work on your habits. Conduct an honest assessment of your current habits and project them into the future, see where they lead you. This is something I’ve learned the hard way and would’ve liked to pay more attention to earlier.

I think there have been moments where my career would have benefited from focusing more in a single project.

I have suffered physically and emotionally from having too much going on at the same time. In 2014, I was launching an online business, shooting a feature film, and working as a teaching assistant, all at once. I had a hard time focusing, didn’t have any downtime and my health deteriorated, this led to catching a persistent cough that lasted for months and sometimes still bothers me!

Something what works for me is being more intentional with what I take on and what opportunities I pass on (even though sometimes they’re great opportunities). I sometimes have doubts over my decisions (especially what I choose to let go), but its part of focusing on what’s important at this stage in my life and trusting that I’m making the best decision with the information I have whenever making a choice.

I feel that having multiple careers has benefited me in the sense that I have a broader set of skills to put into projects. For example, my business background has given me management skills that I’ve put into practice when producing an album or a music festival.

Having multiple careers nurtures my creativity as I have a broad portfolio of experiences and can make connections that span different fields. This means that there are interesting spillover effects, like innovating in the way I teach a class through the types of projects we ask from students (one time I asked film students to produce a show that included the projection of short films accompanied by live bands to illustrate the intricacies of collaborating between filmmakers and musicians).

Being a professor puts me in contact with so many talented and creative people (students, professors, colleagues, etc.). Also, it forces me to learn constantly and this is something I can definitively apply to other roles.

This is hard and has suffered in various stages of my life. Something I learned a few years ago was to identify the different roles I play (partner, brother, uncle, son, friend, etc.) and allocate a specific time slot a week to do something to fulfill each of those roles. For example, I often write stuff like: ‘go on a date’, ‘play Legos with my nephew’ or ‘go for a run with a friend’ in my calendar. These are usually ‘small’ actions but have a significant impact in the long run.

Also, having multiple careers doesn’t mean doing everything at once. You can organize your projects in a sequence.

Not everything I do is glamorous or exciting, there is a lot of hard administrative work behind every project. Depending on the band’s cycle, I sometimes spend way more time doing management tasks than actually playing an instrument (something I consider suboptimal to say the least).

Also, this past year I’ve become interested in stoic philosophy reading authors like Ryan Holiday and am working on quieting my ego. Not everything revolves around us and internalizing this can be extremely liberating.

I have to admit that it is not easy to achieve this everyday and I’m still at a stage where focusing on different careers requires significant effort and can sometimes feel like a struggle.

Where to find Fernando