Why bankers should become soldiers 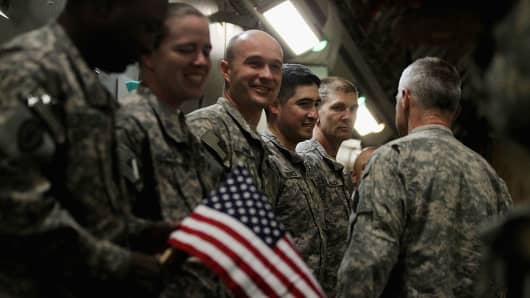 Wall Street needs more veterans, and the military could benefit from more bankers.

Companies have recognized the importance of hiring veterans. As part of the “Veterans Jobs Initiative,” which started in 2011, 235 corporations have hired 360,000 veterans. Wall Street firms have also played an integral role: J.P. Morgan has added over 11,000 veterans to its ranks since the initiative began. “We want to do our share to bring them back into society and give them jobs,” said Jamie Dimon. Veterans are well trained, competent, and loyal, and bring these qualities to their civilian jobs. Veterans make for model bankers, traders, research analysts, compliance officers, and other financial professionals.

But bankers can also do their part by serving their country. I know because I worked at J.P. Morgan before I was commissioned as a U.S. Navy reservist. I joined because I wanted to take part in something greater than myself. Having served on active duty in the Middle East, I realize that financial professionals can provide significant value. Here are three reasons why bankers should become soldiers:

By becoming a soldier, bankers will acquire skills and learn about new technologies that will make them better at their civilian jobs. Bankers who serve as reservists can also benefit financially, making a few thousand dollars a year in extra income – as well as a pension, if they stay for twenty years.

Most importantly, bankers will gain a deep appreciation for those who defend our freedoms at home and abroad. To whom much has been given, much will be expected. Wall Street firms should expect and encourage their bankers to become soldiers.