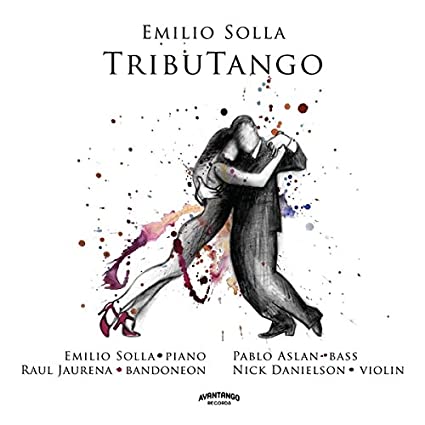 “This album is my tribute to the tango,” says Emilio Solla, composer, bandleader, and pianist. Given that he performs a tango gig every Sunday night at a New York City jazz club, it made sense for him to pay homage to this style. “It was time for me to rediscover why I fell in love with this music in the first place.” And so in composing and adapting these eleven tracks, he went back to the roots of the tango tradition.

“And what a storied tradition it has,” says Pablo Aslan, bassist and tango cognoscenti. Born at the end of the nineteenth century on the shores of the Rio de la Plata, as a dance of suggestive yet restrained movement, it was founded upon the rhythms of the Cuban habanera, Brazilian and Spanish tango, Argentine milonga and the Afro-American candombe. First performed by the immigrants at the cafes of Buenos Aires and Montevideo, the tango gained prominence as conservatory-trained musicians added it to their repertoire, as it became an international rage in the 1920s. Then again in the 1940s, the tango experienced a second Golden Age, as it was performed across many different countries. That the tango has been adapted into various forms was grist for Solla to put his own stamp on this music. To be sure, he listened to the works of the tango masters Osvaldo Pugliese, Juan D’Arienzo, and Astor Piazzolla. “But I wanted to color the music with more harmonies while also keeping it danceable,” he explains.

“More harmonies” is an understatement. Tributango is the creation of a genius composer who imbues each track with a full range of sonic material: vivid melody, thoughtful development, contrasting accompaniment, searing solos, and yes “more harmonies.” This is to be expected of Solla, who left Argentina for Barcelona in his early 30s in search of “new horizons and bigger challenges,” as he puts it. He eventually moved to New York, where he has lived for ten years, and where he has become a cornerstone of the jazz scene — and one of the best composers of our time. Solla wanted to see if he could make it with the big guys, and in so doing, he became one himself.

In creating this album, Solla called upon three other big guys: Pablo Aslan, bass; Raul Jaurena, bandoneon; and Nick Danielson, violin. If they were a football team, they would be called the “tango all-stars,” as they are all “experts of the craft,” according to Solla. He considers Aslan as his primary mentor, who first invited Solla to the United States to perform. Danielson is a virtuosic violinist who has deep experience with both classical and tango music. Jaurena hails from Uruguay and started playing professionally when he was sixteen, and has performed with the great tango maestros like Piazolla. “When Raul plays a tango, it’s like okay, guys, that’s it. This is how it should be played,” says Solla.

Tributango is Solla’s ninth release as a bandleader. And it’s more than a tribute. It’s a triumph of an artistic mastermind, who has given us something new, by channeling the giants of this art form. However, Solla has rendered this music not just for aficionados but DJs and dancers too. These tracks will compel you onto the dance floor. This is quintessential Solla: accessible tunes with refined arrangements.

El Marne
Named after the French river (and the location of fierce World War I battles), this song was written by Eduardo Arolas, one of Solla’s favorite composers. It’s a nod to the importance of France in the development of the tango, as the music flourished in Paris during the 1930s. Solla’s rendition is informed by an adaptation of Aníbal Troilo’s version (one of the most important bandleaders in Tango history). This track is a microcosm of the entire album, which fully inhabits the tango aesthetic, but it’s also virtuosic, modern, and danceable. By doubling the melody between piano and violin, or bandoneon and violin, Solla makes sure that it’s conspicuous. As with all of these tracks, the melody is rarely hidden: Solla’s rendition lingers in your mind, like a fond memory that keeps you company on a rainy day.

El Entrerriano
Solla adapted this tune from a version performed by Juan D’Arienzo’s orchestra. In this case, Solla seamlessly incorporates dissonances and contemporary harmonies, almost to the point you cannot hear them. But if you listen closely, you hear well-placed and unsettled tensions throughout. The opening ascending and descending lines establish the contours of what’s to come: a full range of harmonic contrasts, dynamics, and percussive strikes. The crisp entrances of Juarena and Solla are a terrific display of their musical precision and stylistic panache.

Camusi de Pincho
“Camusi” is an anagram of “musica,” and “pincho” becomes “Chopin.” This type of word play, flipping syllables, is found in the tango slang of Buenos Aires. “This song is an inside joke,” said Solla. It’s not just the title that is in disguise. He also shrouds musical references to Chopin, such as lines taken from the Waltz in C sharp minor. But it’s noticeable enough so that you’ll ask, “Is he playing Chopin’s music?” Indeed, this waltz is a paean to Chopin, one of Solla’s musical heroes. Solla’s masterful piano flourishes are replete with emotional affect, which are only enhanced by the rich accompaniment of Juarena’s bandoneon and Danielson’s violin.

Libertango
This is Solla’s rendition of Astor Piazzolla’s popular tune, which became synonymous with tango nuevo or modern tango. The repetitive and percussive line has won over audiences all over the world. Solla was once hired to write an arrangement of this song for a Piano Quintet, so he started experimenting with rhythms and discovered a way to structure the tune so that it’s recognizable and danceable, perhaps the first time Libertango has achieved such balance. Beginning with Aslan’s thick and percussive bowed bass, the tune pulses with the energy of a locomotive at high velocity. Next station, the dance floor.

La Novena
“Piazzolla had some heartbreak in his music,” says Solla. “This tune is my attempt at capturing this spirit.” Solla wrote the song in the same vein as Piazzola’s Milonga del Angel. “When I was a teenager, I cried when I heard that song,” he admits. Solla wrote this composition as a tribute to Octavio Brunetti, a virtuosic tango pianist who lived in New York but died in 2014 at the age of thirty-nine. La Novena (the Ninth) is Solla’s stirring musical farewell, with its searing lines and lush chords. This track features the full mastery of Solla as composer and performer, delivering a piercing solo, but then creating space for others: Jaurena’s bandoneon and Danielson’s violin eventually move into the foreground, dwelling thoughtfully, as they render their final salutes.

Milonga De Mis Amores
Solla breathes life into a classic, which has been a favorite of tango dancers over the years. Indeed, his rendition exhibits the qualities that make the tune instantly danceable, but he takes it in a jazzier if not more Latin direction with modulations and key changes. This version showcases the band’s interplay at its best: Solla, Aslan, Danielson, and Jaurena pass the melody on to each other, like an Olympic torch that illuminates the next leg of this musical journey. The quick starts and stops establish a clean frame for each musician’s solo voice to flourish in this captivating piece.

El Choclo
Besides La Cumparsita, El Choclo is possibly the most well-known Argentinian tango of all time. Solla embraced the challenge of taking familiar music and adapting it with a sophisticated arrangement, which hints at the melody but doesn’t play it outright. “Everybody knows we’re playing this familiar song, but the tune never really shows up,” he explains. That Solla can infer the melody merely by suggestion reveals his mastery: toying, teasing, if not seducing us to want more.

El Polla Ricardo
A playful, old guard tango from the 1930s, which Solla didn’t alter drastically. Instead, he stuck with the 4/4 marcato feel. He also kept the clear down beats but enhanced the musical development, as if he were telling a well-constructed story. His piano solo sings with ardor and Juarena’s bandoneon simmers with elegance. Moreover, their features extend the tune so there is more time to dance!

Soledad
“Soledad is about loneliness, the guy whose women has left him. But he think that he hears her steps outside his door, but she’s not there,” explains Solla. To bring about this feeling, he invited a singer who hails from Argentina and lives in Miami, Roxana Amed, who delivers a rousing performance on this track, the only with vocals on the album. This tune showcases the extensibility of Solla’s arrangements: no matter a vocalist or instrumentalist, his melodies are always profound and memorable.

Sol La
The title is obviously a word play on Solla’s last name, and it’s a nod to the consecutive notes in the musical alphabet: do, re, me, fa, so, la. Solla plays with these notes, a major second interval, in this through-composed work. “This is the first time I composed something in an old manner like the 1930s and 1940s,” says Solla.

El Polla Ricardo (Remix)
Not satisfied with solely a retrospective album, Solla concludes his oeuvre with a modern electric tango created by Aslan combining samples from the quartet recording of the same piece together with vintage recordings and Aslan’s own modern beat programming. Mastered with the mixing board and computer, this piece isn’t so much an exclamation but a comma. The story of tango goes on, well into the night…