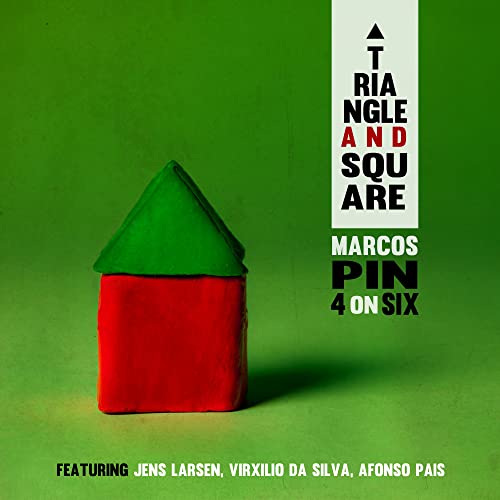 Triangle and Square
Marcos Pin with 4 on Six

The title of this album by jazz guitar phenomenon Marco Pin refers to the two basic shapes needed to draw a picture of a house. Pin chose that image because he composed this album with his hometown of Lugo in mind, and he has dedicated the work to his two grandmothers, both of whom moved from the country to Lugo to build a future for their families. The triangle and the square also represent the structure of the album: two suites, the first of which consists of three compositions and is called Suite Triangle, and the second comprising four compositions and titled Suite Square.

Suite Triangle – The opening trio of compositions were inspired by some of Pin’s most important memories of growing up in Lugo.

I Lugo’s Cold
The first song of the suite is a literal reference to the fact that Lugo is quite cold during the winter. Pin distinctly recalls the sensation of his teeth chattering while walking to school as a child. If you listen, you can hear in the song’s structure and melody the sharp, bracing Lugo winter air that chills you but also reminds you that you are very much alive.

II Streets at Night After the Rain
As a teenager, Pin loved to roam Lugo late at night, especially after a good rain shower when the empty streets would shine and glimmer under the streetlights. To Pin’s young mind, everything looked fresh and new and life’s possibilities seemed endless, and it was this beautiful and inspiring atmosphere that he has captured in this song.

III On a Bop Night
Back in the late eighties and early nineties, Lugo’s only jazz club was an incredible musical scene, a revolving door for hundreds of talented musicians from Barcelona and sometimes from around the world. When Marco Pin first walked through its doors, his life changed forever as it introduced him to the wonders of jazz. He saw not just local acts but famous international jazz figures as well, such as Tete Montoilu and Gary Bartz. If not for that club, he might have missed his calling, so this song is a vibrant tribute to the pivotal role it ended up playing in his life.

Suite Square – Each of these four compositions is inspired by and dedicated to one of Lugo’s landmark squares.

II San Marcos
San Marcos Square is a bright, open space surrounded by beautiful buildings that are an architectural mix of old and new.

III Soledad (Loneliness)
Soledad Square is fittingly small, quiet, and full of trees—one can sit on a bench here and easily tune out the rest of the world.

IV Red Wine Fountain
In Campos Square there is a fountain from which once a year red wine flows instead of water—a Lugo tradition like no other.

Marcos Pin, a graduate of the Royal Conservatorium, The Hague, is one of Europe’s premier jazz guitarists and arrangers who has recorded ten albums and performed at distinguished venues around the world.