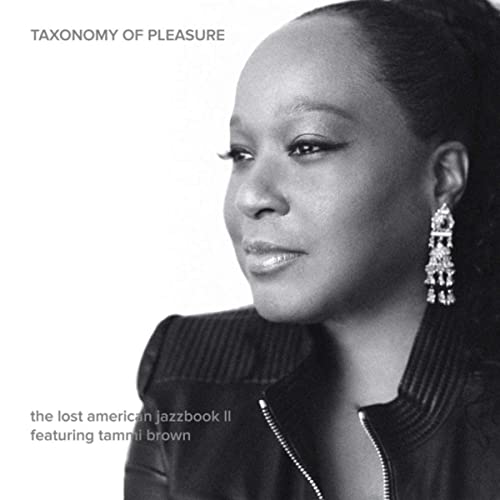 RARE IS THE ALBUM that reminds me of the stay-up-at-night joy of listening to music. This gem of a production featuring Tammi Brown had me not only thoroughly entertained but also intrigued to learn more about the “American art song,” as Albert Greenberg puts it. He conceived of the JAZZBOOK and produced this stunning album. There are seven original compositions written by Greenberg with longtime collaborator Dan Zemelman, one standard, and a Bob Dylan tune. He believes that this beautiful music can be both a communal force and a prophetic voice bringing people together from many traditions to form a more “improvisational union.”

TAMMI BROWN has a storied career as a performer, equally comfortable with soulful gospel as with modern, forward-pushing jazz. Her refined phrasing and powerful voice have an almost hypnotic effect as she inhabits each song, mesmerizing with fresh renderings.

THE SONGS ARE IN THE TRADITION OF JAZZ that became the soundtrack of the 20th century, an era beset by world wars and the systemic scourge of Jim Crow. Greenberg cites Billy Strayhorn as someone who, despite or maybe because of his being the “other” (an African American gay man), created a music of matchless sophistication and grace. Jazz is music without borders. Freedom without compunction.

EACH SONG ON THIS ALBUM IS AS UNIQUE AS A FINGERPRINT, with different melodies, lyrics, harmonic progressions, and arrangements. THE LOST AMERICAN JAZZBOOK continues the American art song tradition of music that addresses the time in which we live through extraordinarily elegant and vivid creations. And for that I’m grateful. These artists have taken the road less traveled, one which more of us need to heed.

-Kabir Sehgal is a Multi-Grammy award-winning producer, author and artist