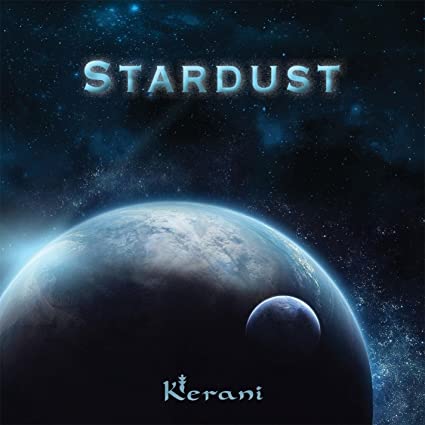 Stardust is a space-themed album that was recorded with the Roermond Symphonic orchestra and the mixed choir Canto Rinato.  Kerani, award-winning New Age pianist/synthesizer and composer on the album, is joined by the all-star lineup Terry Oldfield (flute), Joanne Wigman (viola), Wilfred Sassen (violin), and more.  Drawn to the space-sounds and special effects possible by synthesizers, Kerani  draws the listener into the “spacescape” to experience the music of this superb album.

Humans have been fascinated by the skies for all of civilization, and have always asked the questions as to the meaning of the universe and our existence.  Since 1961, at the start of the “space race,” innovations and journeys of outer space travel have made great progress that has been crucial to mankind.  As the human population continues to grow, and pollution and global warming accelerate, futurists continue to theorize about life on other planets. And what are musicians if not futurists, pointing the way over the horizon, whether it be the far-reaches of our galaxy, or the inner-recesses of our soul?

With this album, Kerani highlights that the earth is part of something much bigger than what we as humans can fathom.

The album opens with the title work, Stardust, which gives us a taste of the expanse of the universe. The track opens with synthesizer sounds and piano, and as instruments are added, we are given the feeling of being drawn through the “spacescape”.  Track two, Cosmic Sunrise, continues to open the soundscape to us, as if we are experiencing the sun rising over the orbit of a planet.  Rosetta, Perpetuum Mobile, and Beyond introduce new characters of the universe – and increase our sense of wonder. Beyond features extended flute techniques that add to the otherworldly feel of the album.  The Next Step is a more rhythmic track, bringing a new feeling of hope to the listener.  Infinity brings a fresh sound: the voice, vocalizing and mixing with the synthesizer – perhaps signaling the possibilities beyond what humans can fathom.  Gravity – comes next – an epic track that feels like something out of 2001: A Space Odyssey or a similar film.  Worlds Unknown and Stars bring us into uncharted territory and renders a feeling of optimism: Stars brings a new, pop/New Age/classical fusion feel that imbibes the listener with hope of a new, and better life, beyond Earth.  In this, one can hear ties to other great artists that were fascinated with space, like Sun Ra.

About Kerani
Kerani was born in Belgium to a Hungarian father and German mother, and Kerani currently lives in the south of The Netherlands near the Belgium border and the area where she grew up. In 2015, Kerani performed in concert with new age music legend Terry Oldfield. A new concert with Mike Oldfield’s brother is planned for May 2017.

In 2016, while composing music for her upcoming album, Kerani also wrote the piano arrangements for the new live album of Dutch singer songwriter Benny Hitt.

Kerani released her first album, Wings of Comfort, in 2011; The Journey in 2012; and Arctic Sunrise in 2014. All three recordings received strong reviews and strong airplay. Her fourth album, Equilibrium (2015), was and still is equally successful.

Using her piano and synthesizers in conjunction with an array of orchestral instruments played by accomplished European musicians, Kerani creates musical storytelling that captures people, places, moments in history and passionate feelings. Occasionally she adds subtle vocalizations to further create a mood. With Equilibrium, her fourth album, she solidifies her position as one of the top keyboardists, composers and arrangers in the neo-classical and new age music genres. Her third album, Arctic Sunrise, went to #2 on the international Zone Music Reporter Chart for this type of music, got airplay on hundreds of radio stations worldwide, was a Top 10 album on the annual ZMR rankings and won the ZMR Neo-Classical Album of the Year Award. Equilibrium reached #3 position on the ZMR Chart and also won the Akademia Award for Best Ambient Album in July 2015. It was nominated for the ZMR Music Award for Best Neo-Classical New Age Album of 2015 and also received a nomination for the OWM Award for Best Electronic Album.