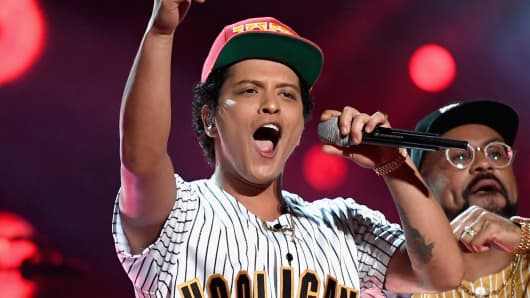 The Grammy Awards on Sunday will feature top stars like Lady Gaga and Bruno Mars. But on “Music’s biggest night” viewers should be reminded of just how difficult it has become for less popular artists to make a living in the digital age.

Streaming services that we all use like Spotify and Apple Music offer great convenience to fans. But artists are getting a raw deal. The simple truth is musicians need to be paid more for their content. And if these services started to act more like record labels, they could afford to do just that.

These days, millions of listeners flock to streaming services to enjoy music that is either advertisement-supported or subscription based. Americans listened to an average of 32 hours per week in 2017, and that number is only rising.

But musicians still aren’t getting a fair shake. Here’s the math: Spotify pays about $0.006 to $0.0084 per stream to the holder of music rights. And the “holder” can be split among the record label, producers, artists, and songwriters. In short, streaming is a volume game.

“When people bought albums and even mp3s, there was a glimmer of hope that a musician could earn a decent income on sales. But now musicians are essentially giving away their music.”

For example, Taylor Swift earned between $280,000 and $390,000 for her song “Shake It Off” which garnered 46.3 million streams, according to one report. But that’s for one of the world’s biggest pop stars. Most musicians won’t generate that many streams in their life time. Another calculation shows that 1 million plays on Spotify translates to around $7,000, and one million plays on Pandora generates $1,650.

When people bought albums and even mp3s, there was a glimmer of hope that a musician could earn a decent income on sales. But now musicians are essentially giving away their music in return for pennies.

Spotify, Apple Music, and other streaming services should raise rates considerably, so that artists can make more money from their wares. No doubt this is a difficult proposition because the streaming business model isn’t actually profitable.

Spotify, for example, is still losing money, despite growing 40 percent a year.

But if it can’t afford to raise the payment rate, here is another option:

It can become a record label and cut exclusive deals directly with artists. In other words, Spotify and other services should disintermediate record labels that can take as much as 70 percent of the money royalties. In this regard, Spotify could emulate Netflix, which started out as a DVD rental service and eventually became an originator of content that has won several Emmys.

When Spotify was a fledgling service, it sought investments from the big record labels. But now Spotify is the big behemoth, and it can effectively replace the labels. In short, Spotify wants content, and artists want distribution. Record labels used to provide distribution. But there are almost no record stores anymore, and the whole game for musicians and songwriters is getting listed and promoted on the music streaming services.

Why does an artist need to give up 70 percent to a record label? With this new model, Spotify would own a piece of the intellectual property, and they wouldn’t have to pay third-party labels. The streaming services could provide cash-advances to artists, so that musicians can make more immediate income from their work.

For example, Apple Music paid Chance the Rapper $500,000 for a two-week exclusive on his music. Streaming services could do the same for the long tail of musicians too: Imagine a talented jazz or country crooner receiving $5,000 or $20,000 to make a new project. That would be manna from heaven!

The music streaming services have the power. They should share more of it with the musicians whose work they leverage. And they might actually be able to make a profit at the same time.

Commentary by Kabir Sehgal, a Grammy Award winning record producer and bestselling author. He is a former vice president at JPMorgan Chase. Follow him on Twitter @kabirsehgal.