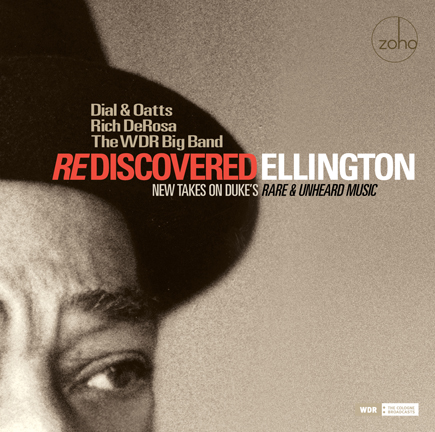 Rediscovered Ellington is a rarity that comes along once every few decades, a trove of mostly unheard music by a music legend fashioned into a glimmering yet meditative production. The great Duke Ellington, for whom this album is a tribute, once observed that “there are two kinds of music”, the kind that connects to the audience with sincerity and the kind that doesn’t. Judging by the response of listeners worldwide, Ellington’s music is of the first kind: beautiful, cultivated, resonant, and timeless.

But for there to be any audience connection at all, the music must first be heard. And that’s what is special about this stunner. Maestros in their own right, Garry Dial, Dick Oatts, and Rich DeRosa, unearthed these compositions from obscurity. They turned musical amnesia into memorable and vivid works that bring Ellington’s life and music into sharper focus not only for the seasoned Ellington diaspora but those new to his sizable repertoire. Dial, Oatts, and DeRosa shaped these compositions with colorful and immaculate arrangements, rendering Ellington afresh and anew.

Prior to this recording, few of these works had a brief public life. Most were unknown to the general public. While a few of the arrangements suggest an homage to Ellington’s sound, most of the works showcase how music may be given new and refreshing life while respecting the composer’s essence.

The album opens with Hey Baby, a mid-tempo swing number recorded in 1946 and released on RCA Victor. It’s also a well-known tune from Blue Rose, the 1956 Rosemary Clooney album. It brings the virtuosity of soloists Oatts (soprano sax), Paul Heller (tenor sax), Dial (piano) and Johan Hörlen (alto sax) to the forefront, and showcases the big band’s mighty brass section in multicolored shout sections. Let The Zoomers Drool, an Ellington/Johnny Hodges tune, was originally released as a live album in 1945 on the Jazz Society label. It opens with a ruminating stride piano riff, enveloped by a slower swing feel, rich with a bluesy call-and-response between the piano and ensemble.

I Like Singing is a gorgeous ballad from Saturday Laughter, a musical Ellington wrote with the still-living lyricist Herbert Martin – and it draws upon Ellington’s classical influence: opening without drums, the sections take on an orchestral quality that features reedy doubles and a plush piano solo by Dial. The drums and bass enter, and the tune transforms into an engaging yet pensive ballad.

Just A Gentle Word From You Will Do is vintage Ellington with a straight-ahead melody recast across the horn and reed sections. This work was composed mostly by Onzy Matthews, a pianist and arranger who worked with Ellington in the late 1960s and early 1970s. It was undoubtedly performed live, but there is no previously-known recording. And to wit, this is some debut rendition, with Oatts on flute and Ludwig Nuss on trombone!

Introspection has no known recording, and is anything but introspective. The up-tempo swing sets up the WDR to showcase its legendary tightness of sound and precision of phrases. Similarly, Kiki also has no known recording. On this track, the big band is fully portrayed with a full, plush, even lavish aesthetic, which makes this album required listening for those looking to learn or merely just enjoy the craft of large jazz ensemble performance. For example, the trumpet section commands the lead line with alacrity, and John Marshall’s blazing trumpet solo stands out with achingly beautiful timbre.

Love Came was recorded in 1965 and released on the Red Baron label. The melancholy and longing melodic line is presented by trumpeter Andy Haderer, and the tune opens into a jazz ballad, allowing for one of the quieter and more introspective spaces on the album.

The penultimate tune of this album, KCOR (rock spelled backward), is thought to have been written late in Ellington’s life. But very little information exists on its origins: this long-form piece diverges so sharply in style from Ellington’s body of work that it probably did not receive much attention through his life.

The final track, I Must Be Mad, was written by Ellington and Patricia Petremont. She was a lyricist for several of Ellington’s more obscure works such as My Lonely Love, When You’ve Had It All, and This Is Where I Get Off – all from the late 1960s. The searching ballad begins with an alto sax and piano duet that illustrates the uncanny parallel relationship that Dial and Oatts have to Ellington and Hodges. Both Dial and Ellington have a way of orchestrating at the piano that enhances a melody. Although Oatts’ sound is different from Hodges’, both embrace a melody with warmth and soulfulness. Here it is Dial and Oatts who give the album a loving, thoughtful send-off.

Rediscovered Ellington is a through-and-through treasure, and music lovers should reserve their deepest gratitude for Dial, Oatts, DeRosa, and the WDR Big Band who have given the world the album of the year whose musical genesis spans many decades.