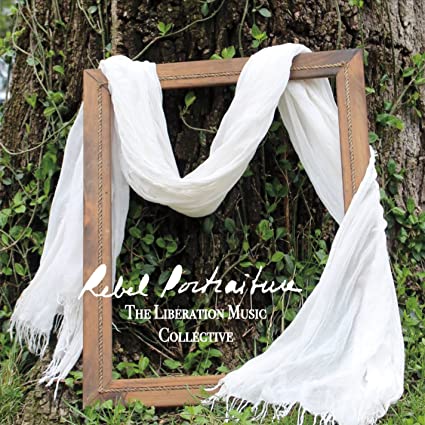 Rebel Portraiture is a paean to courage. Not just to those who have exhibited this quality, but to those who aspire to live in such a manner – to listen and march to the beat of their own drummer. Liberation Music Collective has delivered a sweeping and crucial musical opus that is both timely and timeless. With each song dedicated to someone who lost their life because of who they were or what they believed in, the album invokes a range of emotions from the beautiful to bittersweet. These tracks are tasteful and elegant tributes to those who defied fear and spoke truth to power.

Now their stories become “music to power.” When the powers that be targeted these heroes and compelled them to remain silent, these heroes turned their minds north and their words out. And rather than fade quietly into the darkness of night, we shall forever remember their names and roles: Giles Corey; students at Kent State; Noxolo Nogwaza; Berta Cáceres; journalists in the Middle East.

With this album, Liberation Music Collective keeps their messages alive, in effect bringing life to the activist adage, you can kill the revolutionary, but you can’t kill the revolution.  This album is not only a musical masterpiece and a worthy tribute to these lives lost; it is also, in and of itself, an act of rebellion.  The Liberation Music Collective offers this musical conception of tribute, rememberance, and virtuosity. It’s a worthy cornerstone of the canon of music that is created due to a relentless and persistent vision for a better, safer, and freer world for us all.

The album opens with Passing Away (for Giles Corey).  Written by Matt Riggen, the song is based on the Sacred Harp hymn, Passing Away 445, which was originally written by John A Watson in 1872.  Giles Corey was killed during the Salem Witch trials. With his wife, Martha, accused of being a witch, the accusations found their way to Giles himself.  During trial, Giles refused to plead guilty or not guilty, and was subjected to “peine forte et dure:” a form of torture in which the victim is placed under a wooden board loaded with heavy rocks until pleading “guilty” or “not guilty” – or until death. Giles Corey was subjected to this torture, and was asked repeatedly to plead innocent or guilty to witchcraft. Each time he was asked, he simply responded, “More weight!” He died after two days of “peine forte et dure.” His resistance (and subsequent death) were not in vain: Giles’ actions shocked many residents and contributed to Salem “waking up” to the insanity of the trials. Likewise, Passing Away brings Liberation Music Collective right out of the gate with a beautiful display of resistance.  Beautifully brazen solos by Ana Nelson, Matthew Waterman, and Matt Riggen, and vocals by Hannah Fidler contribute to this initial heroic display of musical resistance that is very much in line with Giles’ dying act.

An Afterlife for Jeffrey Miller, composed by Matt Riggen is a prelude to the subsequent track, Kent State, and includes a poem by Jeffrey Miller, written in protest of the Vietnam War, and a note that he left shortly before he joined the protest at Kent State University; this protest cost him his life.  The spoken-word style for this track is reminiscent of the New York Art Quartet and Ambrose Akiminsure, paying beautiful tribute to both great artists and the great activist.

Kent State, also composed by Matt Riggen., is dedicated to the four students who were killed by the National Guard in 1970 while protesting the Vietnam War: Allison Krause, William Schroeder, Sandra Schuer, and Jeffrey Miller. Twenty-five guardsmen discharged their weapons, firing over 67 rounds in 13 seconds. The horn backgrounds contain brief snippets of protest songs from the Vietnam War era, arranged in the style of Charles Ives’ “The Housatonic At Stockbridge.” The guitar feature is intended to evoke the folk revival of the 60s and 70s that sat at the heart of the era’s protest music.  In this track, we see the cross-genre virtuosity of these musicians – to effectively navigate Ivesian arrangement, protest music, and folk music without losing their collective voice and style speaks to the breadth of these artists.

The next two tracks tribute Berta Cáceres, an indigenous environmental activist who was killed for her work protecting the Río Gualcarque in Honduras. She was renowned for co-founding the Council of Popular and Indigenous Organizations of Honduras (COPINH) and for leading a grassroots campaign to stop the Agua Zarca Dam on the Río Gualcarque. She faced many years of harassment and death threats, both from corporate and government officials. In 2013, she told Al-Jazeera News: “The army has an assassination list of 18 wanted human rights fighters with my name at the top. I want to live, there are many things I still want to do in this world, but I have never once considered giving up fighting for our territory, for a life with dignity, because our fight is legitimate. I take lots of care but in the end, in this country where there is total impunity, I am vulnerable…When they want to kill me, they will do it.” She was shot in her home by armed intruders on March 3rd, 2016. Her death sparked global outrage and a diplomatic crisis for Honduran authorities, who eventually were forced to arrest two former military officers and two former security officers for one of the companies building the Agua Zarca Dam in connection with her murder.  An Afterlife for Berta Caceres is an arrangement of a traditional Ghanian darkpo for gyil and percussion.  River of Life also includes instruments from around the world made from natural materials – wooden alto recorder, wood and gourd gyil, bamboo sticks on the drums, gourds and sand-filled frame-drums, acoustic bass, etc.  The song, with the use of non-Western instruments as well as Liberation Music Collective’s singular style, evokes the river that Berta Cáceres sought to protect, as well as highlight a universal human connection to nature.

An Afterlife for Ruqia Hassan and Iqra pay tribute to the Syrian journalists killed by ISIS in 2016.  The former names Ruqia Hassan, one of the journalists, and the spoken word is a translation of the oldest known verse of the Qur’an, performed by Matt Riggen.  Iqra, composed by Hannah Fidler, refers to the Arabic command to read or recite; the lyric your black-clad Ozymandias won’t last the desert sands” is a reference to the 1818 poem “Ozymandias” by Percy Bysshe Shelley.  An outstanding solo by Kyle Schardt is an out-and-out stunner on the album.

Ditchside Monument and An Afterlife for Noxolo Nogwaza, composed by Matt Riggen, are dedicated to Noxolo Nogwaza, a South African LGBTQ+ activist who was sexually assaulted and murdered by unknown assailants in a suspected hate crime in 2011. The title refers to the location where her body was discovered and the fact that thousands of people attended her memorial service in a monumental show of support for human rights and resistance against hate.  The attack appeared to be a “corrective rape,” a hate crime in which men sexually assault people believed to lesbians in an attempt to “correct” their orientation. Ms. Nogwaza’s death brought significant public attention to the violence facing LGBTQ+ people in South Africa. Over 2,000 people attended her funeral, which led Human Rights Watch, Amnesty International, and other global activists to call special attention to these types of hate crimes. Shortly after Ms. Nogwaza’s death, over 170,000 people signed petition for South African authorities to offer more protection to LGBTQ+ citizens. To this date, no one has been arrested in connection with her assault or death.  The afterlife postlude is a searing lullaby, and include the Bantu language words for ascent and peace.  This track is a powerful call for peace for our heroine’s soul and also for the world.

Afterlife for the Unnamed, the pentultimate track on this trailblazing album, is the traditional arrangement of the Sacred Harp Hymn used in Passing Away.  It calls for us all to be held accountable for our actions as we “pass away to judgement day,” and is a reminder that all people mentioned in this album – perpetrators, martyrs, survivors – will be remembered by generations to come.

The final song on the album, All I Need, was written by Hannah Fidler — a track for the rebels of today and the martyrs of tomorrow, and a reminder that we have everything we need to stand up, resist, and be the change we wish to see in the world. This album is the soundtrack of our times, as our country seems to have turned the calendar from 2016 to 1984. Ever more reason for artists like the Liberation Music Collective to create, spark, and provoke the truth, both in music and society. It’s the job of the artist not just to remind us from where we’ve come but to show us where we need to go – together. Liberation Music Collective has given us the way ahead.