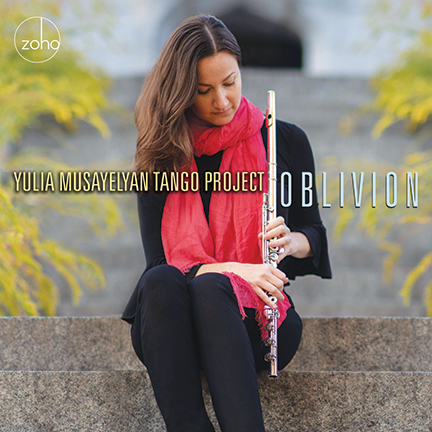 There’s a new tango master in town. Her name is Yulia Musayelyan. And the town is Boston. Before you start thinking about how many tango practitioners may live in this great American city, all you need to know is that after listening to Oblivion there will surely be many more. Indeed, this is an inspired masterwork that will encourage more musicians to explore the vintage and nuevo forms of tango, and perhaps they’ll make a pilgrimage to learn from the maestra herself.

Born in Moscow, Russia, Yulia began studying music at the age of four. Along the way, she earned many prestigious recognitions as a flautist such as the National Foundation for the Advancement in the Arts Awards. She later moved to the United States where she is a professor at Berklee College of Music. What’s more, Yulia is a prolific performer who has played with the likes of Hector Martignon, Marta Gómez, and Marta Topferova, among others. She has also played on more than 30 albums. On Oblivion, Yulia is joined by a stellar rhythm section to complete the quartet, each of them also on the faculty at the prestigious Berklee College of Music. Each member also shares Yulia’s cosmopolitan heritage and outlook– pianist Maxim Lubarsky is a native of Ukraine, bassist Fernando Huergo is from Córdoba, Argentina, and Mark Walker is from Chicago, USA.

Oblivion is an exquisite production on which you hear familiar and forward as well as anew and afresh. “Fuga y Misterio” is the well-known Astor Piazzolla number from his 1968 opera María de Buenos Aires. Yulia’s rendition begins with her searching, solo flute which gains steam with formidable bass lines as to emulate the dynamism of Piazzolla’s opera as well as the energy of Buenos Aires itself. The song continues its brisk pace before winding into a “Misterio,” a calmer, more tranquil section. “Flor de Lino” was composed by Héctor Stamponi in 1947 in the style of tango vals, which was adapted from the European waltz. It’s on this piece we can hear Yulia’s lush lyricism, her ability to craft melodic lines with thoughtfulness and emotional depth. She brings this number to vivid life with her rich tone and becoming timbre.

The title track “Oblivion” is of course the Piazzolla piece composed in 1982 for Marco Bellochio’s film Henry IV. “Its understated yet dark and powerful melody captivated me from the first time I heard it as a teenager on an orchestra tour in Havana, Cuba,” said Yulia. This particular quartet version features hauntingly beautiful flute and piano solos that are both corresponding and complementary. “Milonga de Mis Amores” was written by Pedro Laurenz in 1937 and hews to a more traditional arrangement, so that it can still function as danceable music.

“Como Dos Extraños” was also composed by Pedro Laurenz with lyrics by José María Contursi in 1940. The piece was overlooked and eventually rediscovered a couple decades later when it became a staple of the tango repertoire. The flute-bass duet with Fernando Huergo is a paired down number, which gives ample space for Yulia to sing buoyantly and brilliantly profound lyrics such as “Creyéndote mi salvación” / “Believing you my salvation.”

“La Muerte del Angel” is a Piazzolla piece that was composed in the 1960s, the second of his “Angel” series. This piece is synonymous with the Tango Nuevo style with its up-tempo pace and rich harmonization. An energetic drums intro by Mark Walker gives way to a softer, more introspective section over which Yulia’s flute glides, even as the vigorous tempo resumes. “Si Llega a Ser Tucumana” is a standout selection as the only non-tango piece on the album. This number was composed by Gustavo “Cuchi” Leguizamón, based on the traditional Argentinean zamba, a folkloric music style and dance from northwest Argentina. That Yulia wanted to feature this song speaks to her grasp of the raíces, the roots of music from the Americas. To be sure: people, culture, and music are intertwined in a biodiverse network. This is something we often forget. 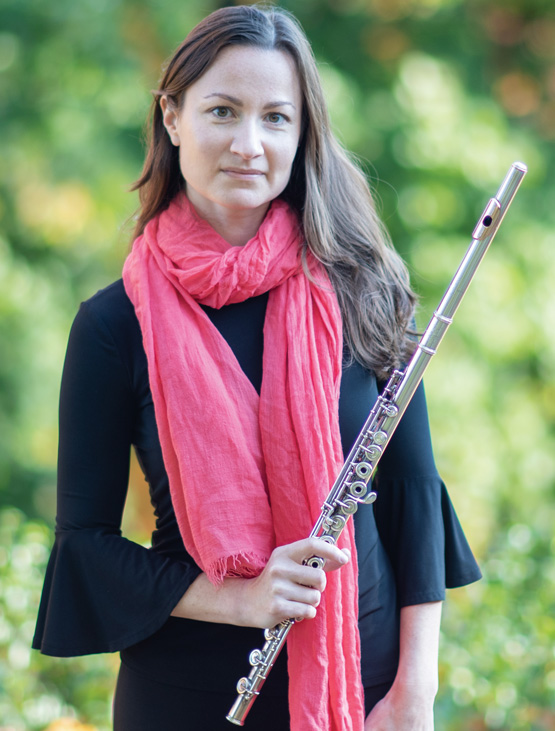 “Nada” is a tango canción that was written by the venerable composer José Dames in 1944. Yulia’s rendition features piano and bass solos by Maxim Lubarsky and Fernando Huergo that provide dynamic and harmonic contrast throughout. Yulia plays the melody on the bass flute, which makes the piece feel ever more

robust and approachable, as if to emulate the human voice. “To Ostatnia Niedziela” was composed by Jerzy Petersburski in 1935, and it’s the only tango written by a European on this album. This particular song has been part of the soundtrack to many movies. Yulia first heard it as part of Burnt by the Sun, a 1994 Oscar-winning film. The quartet arrangement features both flute and piano solos.

“Nostalgias” was composed by Juan Carlos Cobián in 1935. The piece was originally intended to be featured in a musical theater tribute to Carlos Gardel, one of the great tango singers and composers of all time who was tragically killed in a plane crash. But this piece didn’t make this cut in the tribute. It was eventually recorded by many reputable tango orchestras. Yulia’s version is first class, with verdant layers of harmonies and virtuosic solos. “Libertango”, written in 1974, is perhaps the most recognizable and well-known of Piazzolla’s compositions. Yulia begins with a heartfelt and pulsing flute melody. The bass quickly takes over the solo, effortlessly blending registers. The piece is a pleasant surprise, as each instrument plays its complementary role, and you don’t know when they’ll switch places. But one thing for certain – it sounds both fresh and free.

Yulia Musayelyan is the real deal. She makes music at the highest level, with emotional depth that draws upon her spiritual core. Oblivion is an opening salvo of a tango master. This album features some of the most iconic tango pieces of all time yet played in a manner that is refreshing and rejuvenating. This is where tango is headed, and it couldn’t be more exciting.