The Atlanta Braves are World Series Champions! – My personal reflections 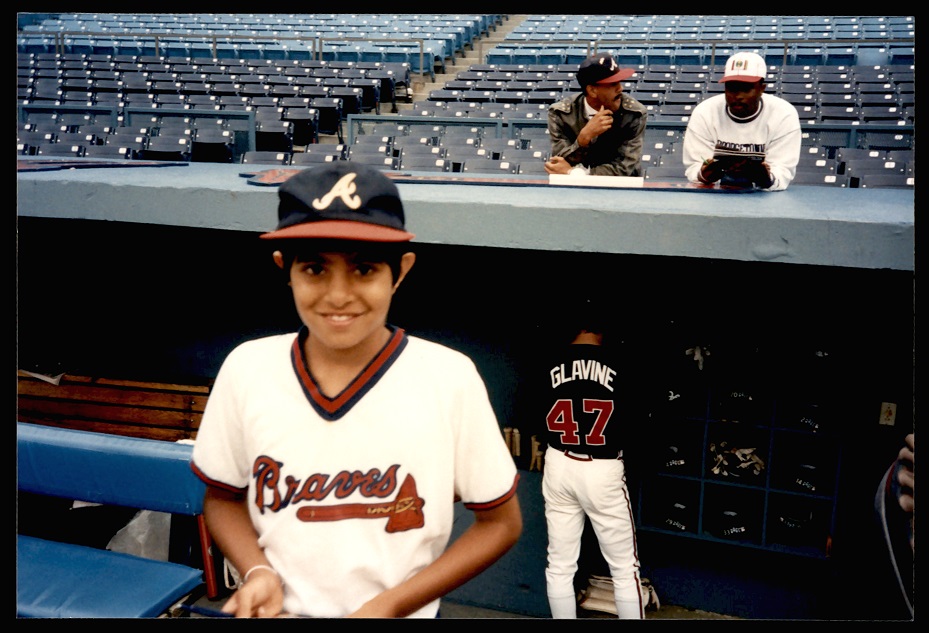 The Braves are by far my favorite professional sports team. I’m from Atlanta and came of age during the incredible run of success by the Braves during the 1990s. There was the worst-to-first season of 1991. There was the Sid Bream slide to win the 1992 NLCS against the Pittsburgh Pirates. And there was the 1995 World Series championship, which I was lucky enough to be at with my family at Fulton County Stadium. The Braves winning the 1995 World Series

I knew the players’ names, their stats, their histories. My late grandfather Nanaji and I would watch the games together in our living room. I played little league and pretended to be Terry Pendleton and Andruw Jones. I revered pitchers Greg Maddux, Tom Glavine, John Smoltz. I even threw out the first pitch of a ball game. We were blessed that Hank Aaron, who passed away earlier this year, was a friend of our family. My friends were all Braves fans, and I went to school with the son of the Braves’ general manager, the son of a Braves relief pitcher, and the son of the Braves play-by-play announcer. My childhood is chock-full of memories of the Braves.

Rest in Power #HankAaron. I was proud to present him this Thelonious Monk with John Coltrane album. He came over for dinner & he said that he loved the music to which we were listening. We will miss this giant of a man, hero, and friend. 🙏🏽💜⚾️🎵 pic.twitter.com/atQGNO63WD

There was so much energy in Atlanta during the 1990s. As a kid, I felt like my town was at the center of things. We hosted the Centennial Olympic Games in 1996, and my sister and I ran the torch. Atlanta hosted Super Bowl XXVIII in 1994, and the Atlanta Falcons played in Super Bowl XXXIII in 1999. Ted Turner owned the Braves and they were featured on his TBS, creating a nationwide following of the team. CNN, based in Atlanta, was in its heyday. The Braves kept on winning…

But the Braves’ run in the 1990s was always tinged with the lamentable “They only won one World Series.” After winning fourteen division titles in a row, going 1-for-14 seemed like an underachievement. Years later, when I began to meditate, I would use these memories to learn how to “detach” from things, outcomes, and especially desires.

I remember what the Braves did each year of the 1990s viscerally, and how they performed colors what I think of that particular year. For example, I view 1997 as not a great year – whatever that means! – because the Braves flamed out to the Marlins in the National League Championship Series. When the Braves lost to the Padres in the 1998 NLCS, I chucked my television remote control at the framed Jerry Rice poster in my bedroom, and it broke the glass. I never fixed it, and it still hangs in my room, a reminder of the anguish and disappointment.

Back in the day… Throwing out the first pitch at Fulton County Stadium. @Braves #WorldSeries #WorldSeries2021 pic.twitter.com/7LjLc0gvQ2

Of course, every sports fan thinks that they’ve endured years of hardship and misery by supporting their beloved franchise. But being a Braves fan has been an especially difficult road. They are the heartbeat of Atlanta sports. Our city has been devoid of championships for now some 26 years (since they won it all in 1995). The Atlanta Hawks have never won a championship. The Falcons have never won. In fact, I was at Super Bowl LI when the Falcons were up 28-3 against the Patriots, and we all know how that turned out. Atlanta franchises became known as “chokers” in the media and among sports fans.

No matter where I was in my life, I always kept tabs on Braves games. I recall checking scores while I was in college at the library, living abroad, and serving on a submarine base. Just a few weeks ago, I was up until 4 am in Europe watching the team in the NLCS against the Los Angeles Dodgers. I’ve had countless meals on the road alone, while reading about the latest game on my phone. I’m devoted.

Yet when the Braves went through a losing stretch in the mid-2010s, my interest indeed flagged, and I started to think of baseball as a parochial sport that was losing interest among younger audiences. Maybe it still is. But deep down, I probably just wanted the Braves to win again. I wanted them to matter.

Then again, why do sports matter? Why did my daily disposition sometimes depend on how the Braves performed? It makes no sense, really. A bunch of guys I don’t know hitting balls around should have no impact on my mood or feelings. 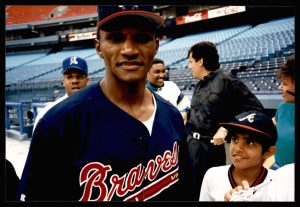 But that’s the great thing about sports – its irrationality. You have to take a leap of faith and believe in something. Rooting for the Braves brought me closer to my family and friends. We were all pulling for the same thing. And especially when you root for your hometown team, it’s an act of communion with fellow citizens.

It’s not like there’s much else bringing us together these days. Atlanta is beset with all sorts of challenges such as crime, zoning, transportation, and so on. Even the Braves have faced difficult issues off the field. When they moved to their new stadium at Cobb County (instead of downtown), it made it more difficult for minority communities to attend the games. What’s more, the tomahawk chop – the collective chant of Braves fans – has become viewed among some observers as an anachronistic, even racist gesture. I don’t chop anymore. I try to focus on what the team does on the field.

When you keep your attention on the field – it’s easy to marvel at the 2021 Atlanta Braves. They are the second team in history to win it all after having a losing record at the All-star game. There’s a bevy of fascinating facts that tell the tale of their title chase. They lost several of their stars during the season. But their general manager made some savvy trades to acquire the talent the team would need during the second half. And during the postseason, most professional baseball analysts picked the Brewers, Dodgers, and Astros to win. But the Braves kept winning, winning, and winning. We overcame the odds. 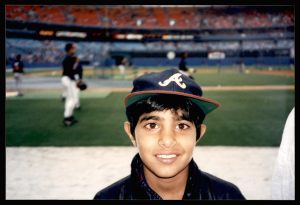 While the Braves were playing well, and the outcome looked promising, I still didn’t totally believe. Years of heartache, remember? It wasn’t until last night in Game 6, when I was watching the game with my family, and the Braves were up 7-0 in the ninth inning with two outs. “We might actually do this,” I said to myself.

The crack of the bat, a groundball to shortstop Dansby Swanson who threw the ball to first baseman Freddie Freeman.

The Braves are World Series Champions.

I came back to my room and looked at the Jerry Rice poster, the same one I had broken 24 years ago and ran my hand over the glass. The years of “oh-so-close” and disappointment were over. I thought of those 1990s teams. I thought of Nanaji, my grandfather. I smiled thinking of how proud my fellow Atlanta citizens must be — and everyone throughout Braves Country.