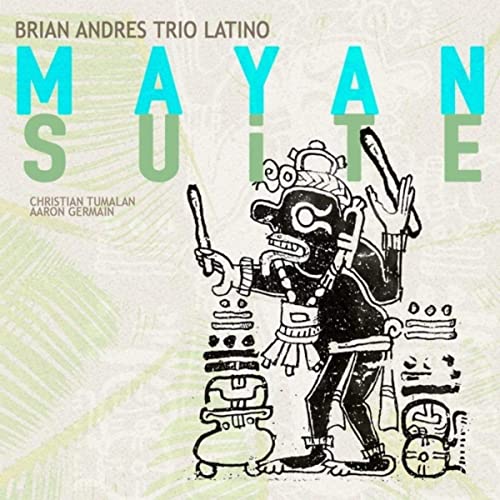 Brian Andres is a virtuoso. Quite simply, he’s one of the most talented percussionists on the scene today, someone who can navigate intricate Latin rhythms and full-throttle swing triplets with dexterity and grace. Maybe he was born with it: Hailing from the Midwest and growing up in a family of musicians. But there’s no denying his intrepid curiosity and dazzling desire to learn and master his craft. In 1999, he moved to the San Francisco Bay Area, where he established himself as a premiere percussionist, where he has performed with veritable all stars from John Calloway to Dr. Loco.

In 2007, Andres started The Afro-Cuban Jazz Cartel, a band that performs repertoire that fuses jazz with music of Latin America. The band has made three terrific releases, including the most recent This Could Be That (2016). For this production Mayan Suite (2020) Andres wanted to spotlight his trio (which makes up the nucleus of the bigger band). “In the larger group, we’re basically playing supportive roles,” he said. “Whereas in the trio, we three have to step up and contribute as individuals to make it work.” Indeed, the Brian Andres Trio includes the maestro himself on drums, Christian Tumalan (piano), and Aaron Germain (bass).

It’s a joy to listen to Mayan Suite, a reminder of the stay-up-until-late excitement of listening to magnificent music. The trio sparkles throughout, pairing soaring solos with vivid and glistening arrangements that evolve charmingly. “Got a Match” is of course Tumalan’s arrangement of Chick Corea’s tune with allusions to other songs in Corea’s vast repertoire. This song was also on This Could Be That. But this time the performance is even more intimate and vibrant. “Viento Solar” was composed by Tumalan and demonstrates the best of Cuban jazz with brisk energy. “Mayan Suite” the title track is also Tumalan’s piece that is a five-part episodic journey through tempos and progressions that pays homage to his Mexican heritage.

“Someday My Price Will Come” is indeed the vintage standard. But there’s nothing standard about this performance in 6/8. The trio played this tune as a warm up on its first day of studio tracking. Upon listening to the playback, the band decided to keep it. The right decision! “Islands” is a piece by Mike Maineri and Steps Ahead. The Brian Andres Trio Latino gives this piece a bomba feel, in tribute to Puerto Rico. Germain’s bass solo is one of the high points not just on this track but the entire production. “Morning Sprite” is also a composition by Corea from the 1990s. The trio fully inhabits the tune with emotional poignancy. “Si Tu Vez” is a thoughtful and meditative ballad by Tumalan and serves as an emotional and reflective counterpoint to more of the up-tempo repertoire on the album. Composed by Germain, “Higashi Nakano” was also recorded on San Francisco (2013), a release of the Afro-Cuban Jazz Cartel. This performance is delivered in the style of chachacha, which makes you want to nod along – and in time. “On Green Dolphin Street” is indeed a terrific standard, yet the trio takes it down the Malecon with a Cuban feel.

The Brian Andres Trio Latino has raised the bar with Mayan Suite, producing something that is both blissful and beautiful. These three incredible artists have come together to create humming melodies and elegant harmonies, a symphonic whole for everyone to enjoy.