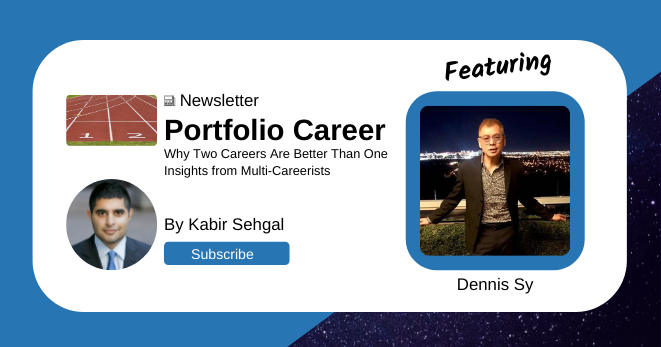 Meet Dennis Sy. He is a talented multi-careerist who deftly balances his vocations. I’ve known him for several years, and we’ve collaborated on a few music productions.

On his motivations for having multiple careers

“I’ve identified many things that appeal to my personal development goals, whether it is coding logic that needs resolution, a project that needs to be delivered under tight deadlines, a song idea that needs to be realized, or a story needing to be shared. Put simply, I’ll probably be bored stiff and feel unfulfilled if I just focused on one-dimensional pursuits and not give in to my creative compulsions.”

On how long he’s had many careers

“Close to 30 years as a performance artist and as an IT professional. About 15 years as a songwriter, recording artist, producer.”

His advice to others who want to balance many careers

“Exercise controlled focus. You can accomplish anything if you set your mind to it and block off the appropriate time to achieve it. Indeed, it would be hard to fix computer code that’s staring you right in the face if your mind starts to drift to an exciting song idea you plan to write later in the day. Only you can define what pursuits are important to you, but once identified, give each the required attention and respect it requires for its achievement.”

On obstacles he has overcome

“We artists deal with personal setbacks all the time. We’re in the ‘business’ of being judged for what we create. The subjective nature of art appreciation presumes at some point in your career that someone will opine that your art is ‘no good.’ And as sensitive creatures, such words are bound to sting and affect your resolve unless you adopt of mindset of creating art of creation’s sake, and not for seeking validation or acknowledgement from others.”

On the benefits of having more than one career

“The arts have influenced my mindset when dealing with problems in the corporate world, and the structured syntax the governs the world of computer programming has also influenced the way I deal with music creation. Everything has a rightful solution when you break it down into logical units and perform proper analysis. A steady IT career and gigging have also provided financial options when it comes to upfront funding of music projects.”

“Just like with everything that’s important to you, you have to make a conscious effort to carve out appropriate time to devote to family. You make the time for the people and endeavors that matter most in your life. It’s a constant challenge trying to balance all these demands on your time and energies, which leads us to…carving out personal time for yourself. For me, it’s devoting an hour each work day during lunch break just for me, either thru a walk or just hanging out someplace where I can be alone with my thoughts and find my center.”

What he wish he had known earlier

“Every muse can be a jealous calling – demanding you to give yourself entirely to it. For me, the biggest lesson is defining success in my own terms and being at peace with what I’m able to give to a particular undertaking. And judge success based on how much effort I’ve been able to put into it vis-a-vis the results. More often than not, the reward is in navigating the journey rather than what you might see at the finish line.”

“I try not to mix my corporate persona with my artistic persona, especially when it comes to the shameless promotion that is sometimes required by my artistic endeavors…For the few in the corporate world who know about my music brand, I find myself being extra careful that they don’t start to think my project deliverables may be compromised by my music pursuits.”

Where to find Dennis

Kabir Sehgal is a Multi Grammy & Latin Grammy Award winner. He hosts the nightly Quarantine Concert Series which features musicians that is broadcasted on LinkedIn and other platforms. He is the New York Times bestselling author of fifteen books including Close the Loop: The Life of an American Dream CEO and His Five Lessons for Success (Hachette, 2020) with his father Raghbir Sehgal which is a Los Angeles Times & San Francisco Chronicle bestseller. Follow him on Twitter.