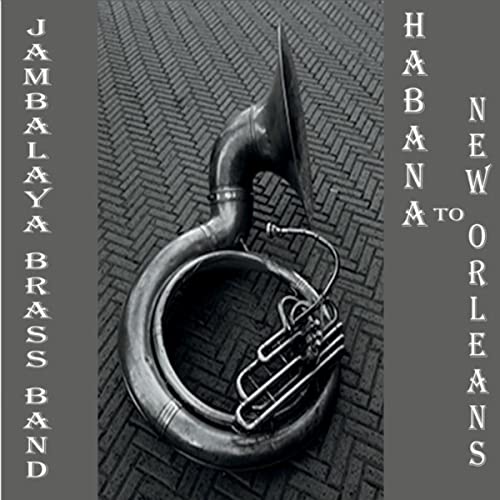 The big, brassy beat of a Bourbon street club spills onto the streets of New Orleans, while in Habana’s glamourous Miramar district, rumba dancers sway to saxophones filling the famous Casa de Musica.

How the Jambalaya Brass Band can be in both places at once becomes clear on “Habana To New Orleans,” their guided tour of the African-inspired sounds of these two great music cities. This album is poignant reminder that American music might be better labeled as the rhythm and tonalities of Havana and New Orleans are born from the same traditions. And on this album, The Jambalaya Brass Band exquisitely renders an homage to both cities and their common musical language.

Our journey begins in historical Congo Square, a trumpet-laden tribute to the market space in the footloose Treme neighborhood of New Orleans, where enslaved Africans were allowed to sing, drum, dance, and play their ancestral music. Band leader Ric Frank on tenor sax with Mark McGowan on trumpet and Curtis Fowlkes on trombone, then draw a straight bass line to Cuba and the sensual, snaking guaganco dance that embodies Tumbao, a Spanish word that means to exude rhythm in the way one moves.

Feeling hungry after this stylish show of swagger? Gumbo Ya-Ya is on the menu, a lyrical Lousiana stew of trumpet, sax, trombone and tuba, served steamy and spicy. In The Raven, Ric Frank and the band explore the magic and mystery of old New Orleans before taking øight again to Habana, settling into the warm, deep tones of Miramar and its window into Cuban life before the 1959 revolution. Dr. Buzzard and The Bolito Man lands on the Atlantic shores of Georgia and South Carolina, where people from the coastal Gullah and Geechee is what the Gullah call voodoo. “The Bolito Man” means “luck,” and the track’s bright, free-flowing horns cast a compelling spell on the lucky listeners.

Back in New Orleans, the band sits in at Parkway Bakery, which has served its famous Po’ Boy sandwiches since 1929. Curtis Fowlkes’s trombone puts the roast beef on this track, while Jim Seely’s trumpet pours on the gravy. Besides the Po’ Boy, another seduction of the South is the sweet smell of Magnolia flowers, sensory delight the band infuses into the fragrant Magnolia Special. Jim Seely’s untamed trumpet returns to dominate Here Dey Come, a brass-horn homage to the Wild Magnolias, the legendary New Orleans band. The Wild Magnolias are part of the secretive Mardi Gras Indians, keepers of a longstanding tradition of African-Americans parading to Native American music and rituals on Fat Tuesday, a.k.a. Mardi Gras, which marks closing time for the city’s uninhibited annual Carnival celebration.

The final track, Still Walking Back, honors the all-too-brief life of Kerwin James, who passed away in 2007 at 35 from a stroke. James, who left his native New Orleans after Hurricane Katrina’s devastation, was a beloved sousaphone player for the eclectic New Birth Brass Band and the brother of Phillip Frazier and Keith Frazier of New Orleans institution the Rebirth Brass Band. James grew up in the Treme neighborhood, where the roots of earthy brass-band sound took hold and eventually became America’s music. “Still Walking Back” was one of James’s nicknames; imagine him with his tuba case in hand, walking to New Orleans just like Fats Domino sang.

It’s the same well-worn path those who believe in the richness and rawness of brass bands travel as well. And with the commanding Jambalaya Brass Band leading the way, that road is sure to be smooth and soulful.