I first knew that I wanted to be a musician when I heard a great local jazz guitarist in Innsbruck, Austria. He turned me on to guitarists like Jim Hall and Wes Montgomery, which reinforced my desire.

At the time I wasn’t able to verbalize why I wanted to have a life in music, but over time it became clear that I was attracted by the opportunity to communicate with both audiences and fellow musicians via my playing, and later my composing.

I learned that music is able to transmit the infinite world of feelings and thoughts that cannot be expressed through spoken or written language, and thereby widens the avenue of communication with my fellow humans.

I have eclectic taste, so I listen to a variety of musical styles – classical (both traditional and contemporary), jazz, film music, pop, rock and ethnic music.

The musicians who have inspired me have changed over time, but looking back the most important ones were the aforementioned Jim Hall and Wes Montgomery, the guitarist John Scofield, Miles Davis, the saxophonist Michael Brecker, the film composer Jerry Goldsmith and the composers of the Second Viennese School, Arnold Schoenberg, Alban Berg and Anton Webern.

Recently I heard the Violin Concerto by Mexican composer Gabriela Ortiz, which completely blew me away.

My focus for the last 25 years has been on composing, arranging and orchestrating. I don’t play the guitar anymore, and in writing I don’t have a practice routine.

In my early composing days I would write a “jazz standard” every day, and not spend more than 20 minutes on it.

These days I regularly look at orchestral scores by other composers and try to imagine in my head how the music sounds. This helps me with my own composing, since the skills gained from score study allow me to get more writing done when I’m away from my keyboard. 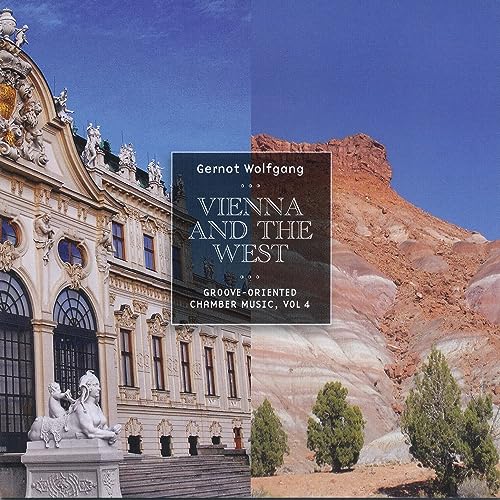 Vienna and the West
By Wolfgang Gernot

At the time I planned VIENNA AND THE WEST (Albany Records TROY1760) I had been living in Los Angeles for more than 20 years.

I felt that I needed to make an album that reflected the dual internal worlds that I was living in – the present, symbolized by Los Angeles and the wide expanses of the American West, and the past, represented by my previous life in Austria.

When considering the repertoire for this album I realized that I had been writing pieces all along that captured the spirit of either one or the other of these two locations.

And the musical language I had been using was a mix of European style Contemporary Classical Music and (American) Jazz. I ended up writing two new pieces especially for this project and then felt that I had the material to realize my musical vision.

5. What were the biggest obstacles in writing this book?

The biggest challenge was to consolidate my recording schedule with the schedules of the musicians that I asked to be part of this project. Among them were GRAMMY winners and nominees, studio musicians and members of all major Los Angeles orchestras. One of the things they had in common was that they all were incredibly busy! But with a combination of luck and good will on part of the musicians we made it happen.