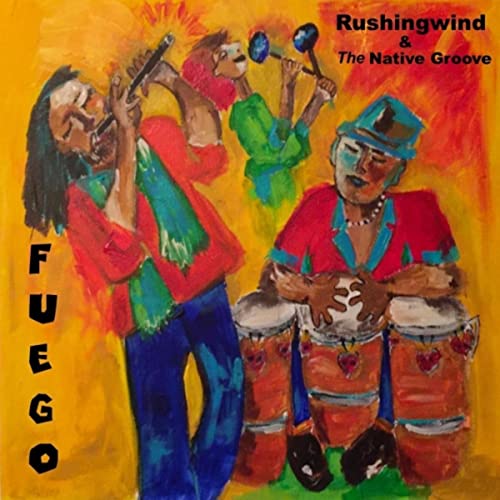 Fuego
Rushingwind and the Native Groove

Clearly, this man has been heralded as a creative mastermind, yet with Fuego, he is trumpeting others: his parents who are both musicians.  With a Mexican mother and Native American father, Rushingwind creates a Latin-Native American fusion that forges a fresh and deeply personal sound. This is the music of his family, his outlook, and his life. And for a musician to bring his worlds together in such a graceful manner, it’s a testament to Rushingwind’s introspection and thoughtfulness as a musician and person.

“Listening to Fuego, all I have to say is one word – smoooooooth,” raves Darren Daughtry, guitarist from the O-Jays.

Rushingwind and the Native Groove is an eclectic group of musicians that are masters at their crafts, and this album is the perfect showcase for their virtuosity. Rushingwind joined forces with Nelson Rios (Miami Sound Machine’s percussionist for twenty years) and formed Rushingwind & The Native Groove. Yes, The Groove fully represents musicians from every corner, and they have just toured in every corner. The band consists of musicians from the East and West coast. And the band has performed at the Sunwatch Flute Festival, Aboriginal People’s Choice Awards in Winnipeg, Manitoba in September of 2014, Native Rhythms, Melbourne Florida, Los Angeles Arboretum, The Rancho Santa Ana Botanical Garden and Sacred Fire Studios in Philadelphia PA.

Fuego opens with Danza del Corazon; from the very beginning, the indigenous flute and percussion are featured in a soulful and yet rhythmic piece.  From there, we hear Esmeralda, another expressive tune with subtle Latin and Native American influence.  Tambor De La Noche is a slightly more uptempo play that brings percussive motifs to the foreground with elegance and panache.  The title track Fuego features the virtuosity of Rushingwind on the flute.  Corazon del Amor showcases Rushingwind on vocals, opening with a melody that is evocative of a Native American shamanistic invocation.  Maredo introduces a pop-backbeat in the drums, bringing a unique perspective to the  blended aesthetic of this album. The two final tracks on this album, Por Vida and Luna Loca, feature Latin rhythms on the congas, bringing a cohesive end to this immersive experience melding two cultures into a unified sound.

Indeed, as David Fleming, producer and host of KVCR-FM says, this album is “not only a treat, but also a pleasure to study.” Fuego is a masterful production of Native American melody, harmony, and Afro-Cuban “riddim”!