I’ve been blessed to know Congressman John Lewis for most of my life. He was a family friend since at least the 1980s when he visited my father, Raghbir (R.K.) Sehgal, in his office to discuss local business and political matters. Over the years, it was remarkable to learn from and even travel with him. In his final months, I had the opportunity to collaborate with him on a book of his final reflections, Carry On: Reflections for a New Generation. He knew that he didn’t have long to live, but he wanted to ensure that his departing words were captured to help guide the next generation. 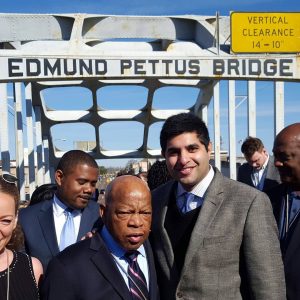 Here are a few takeaways

Lewis grew up with little money in Troy, Ala. He never aimed to accumulate wealth, and he saw the federal budget as a reflection of our collective values as a country: “We spend billions of dollars on wars in other countries. How about we use that money here at home building schools, to feed the hungry, for housing and medical facilities?”

It’s as if Lewis, who made these comments in 2020, had a premonition of President Joe Biden’s unfolding policies of removing U.S. forces from Afghanistan while simultaneously pushing ahead with a large infrastructure bill. Indeed, Lewis understood how jobs – and fair wages — were springboards to a more equitable country. Progressive businesses were arguably the forerunner to political change during the civil rights movement in Atlanta. The Coca-Cola Co. urged city hall officials to integrate so that our city could be a more inclusive, welcoming, and just place.

Lewis felt agony because of the deaths of George Floyd and so many others. These racially charged killings reminded him of Emmettt Till who was lynched in 1955. But despite his anguish, Lewis urged Black Lives Matter protesters and others to stick with nonviolence: “Destruction doesn’t work. Rioting isn’t a movement. We must be constructive and not destructive. Chaos is sowing more division and discord,” he reflected.

In an early draft of John Lewis’ speech at the 1963 March on Washington, he said that protesters would march on the South like General Sherman (who burned Atlanta). Dr. Martin Luther King Jr. and others intervened to see if Lewis would soften his statement, and Lewis obliged: “I listened. Always listen. I believed in nonviolence, and I didn’t need to use the imagery,” said Lewis in the book.

Live in the moment

The past and future exist only in our minds. The only real, vivid moment is the present. “A good day is waking up! … You can write your own script and determine how you live each moment. And how you will respond to the people and events throughout your day. You don’t have to jump ahead and think about the future.” Lewis appreciated the little things – reading the newspaper, the daily walks, spending time with his son. He loved going to local antique shops and strawberry milkshakes. He wasn’t a fan of peanuts though. He ate them so often as a kid that he didn’t take to them as an adult.

While it’s no surprise that Lewis loved Atlanta, it was wonderful to know it held such a special place in his heart in his final weeks. He reflected upon some of his fond memories: marching in the Atlanta Pride parade, the success of Atlanta United, the places he liked to eat. Indeed, John Lewis and Atlanta will forever be linked. He helped to make our city a better place to live, a more equitable and fair society. And that’s the point – to leave the community in which you live a little better off from how you found it.

I will miss Congressman John Lewis and his determined, steadfast leadership. I will miss speaking with and learning from him. But I’m grateful that he gave us some of his final reflections that we can return to for guidance and motivation in the years ahead.

This article was also published in the Atlanta Business Chronicle.

Kabir Sehgal is a New York Times bestselling author of sixteen books including Carry On: Reflections for a New Generation with John Lewis.