“Carry On” nominated for a GRAMMY- My Personal Reflections 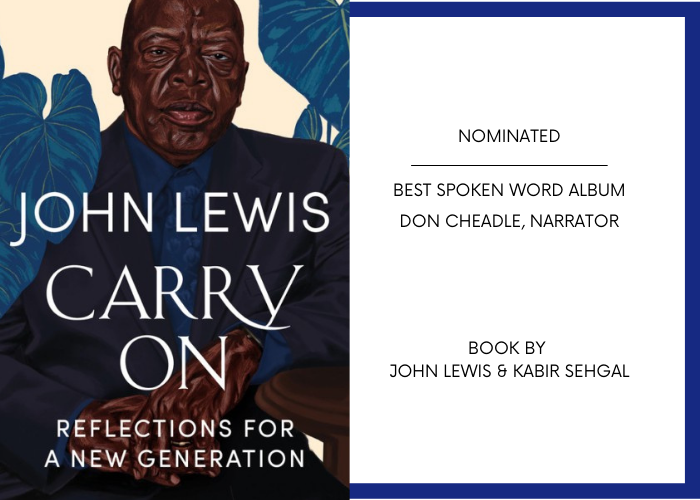 Carry On: Reflections for a New Generation is nominated for a Grammy Award in Best Spoken Word Album. The book is by John Lewis and Kabir Sehgal, and the audio book is narrated by Don Cheadle.

A message from Kabir:

I’m very, very proud that the book I was blessed to write with Congressman #JohnLewis is nominated for a #Grammy in Best Spoken Word Album.

Those of you who know me well know I’m uncomfortable posting about my involvement with nominated projects.

I prefer the spotlight on the artist, the nominee. I like the background.

That’s probably why I didn’t excel as a musician.

But this feels so very different. It’s personal. It’s emotional. Like, I cried yesterday.

Not because of the recognition and the validation. Yes, those things are nice.

But because I miss my friend.

2020 was an extremely tough year. The pandemic, the racially-charged killings.

The suffering. The sadness.

We also lost a national hero and human rights icon.

We Georgians lost a congressman.

I lost a mentor.

Yesterday when the nomination was announced, that sadness of losing him came back.

I thought about our conversations in his final weeks.

Those memories soon turned to fond ones: meeting with him in DC, marching in Selma, singing together in Atlanta.

That sparkle in his eye. That wonder in his mind.

Lewis knew that he didn’t have much time left, but he made the time to speak about what was important to him.

He wanted to share his wisdom – one last time – for this book.

And for the ages.

When he passed away, I felt an enormous responsibility to make sure his words and thoughts were reflected properly on the page.

How do you help write the final words of a luminary?

I struggled with this project more than any I’ve ever been involved with.

So that’s what makes this nomination special and bittersweet.

John Lewis would have been elated with the news.

I know he would have been over-the-moon to attend the Grammys and celebrate with all of our peers.

In my mind’s eye, I can see him dancing in heaven.

I’d like to thank John Lewis’s family and estate, Don Cheadle who beautifully narrated the book, my godfather Ambassador Andrew Young, the incredible team at Hachette, and my co-producers of the audio book.

I flipped through the book this morning, and these words of John Lewis stuck out:

“I know it is within our power to make such a world exist.