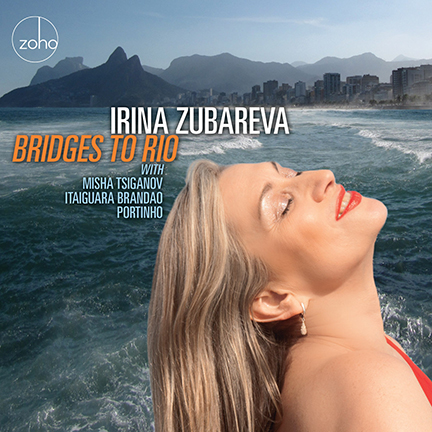 It’s often said that jazz is global music. No doubt, it’s borne in the southern United States and originates from African roots. But the structure of the art form is like a public commons where incredibly talented people are able to perform and enrich this musical tradition.

Irina Zubareva is one of these highly skilled and gifted artists whose interest in jazz stems from her family. Her father was a double bassist as part of a jazz orchestra in Russia during the 1970s when this type of music was forbidden there. He used to play at a restaurant where Irina’s mother would also sing.

Irina received her graduate degree in Music from the Saint Petersburg Academy of Art and Music, and then performed in the main Jazz clubs of Saint Petersburg. Since 2001, she has toured Finland, the Netherlands, Germany, Malta, the Dominican Republic, and also worked as singer with a band or as jazz duo on cruise ships. Since 2013, Irina has been living in New York where she has performed with Hendrik Meurkens and the Art Lillard Big Band at the Iridium club and the Zinc Bar.

There’s indeed a part of this album which is nostalgic, an honorific to Irina’s musical parents who instilled in her the appreciation and gift of music. She knows that her father would be immensely proud of her singing his favorite music in New York City. And yet, this album is ever more, something unusual and rare that makes you remember how limitless jazz can be.

I’ve long thought of Brazil and Russia together, as they begin the acronym BRIC. This term refers to emerging markets and includes India and China. But this is the first time that I’ve thought of Brazil and Russia fused through music. Bridges to Rio is the mixture of Russian and Brazilian songs with a combined Samba jazz aesthetic – facilitated by Zubareva’s ability to sing in Russian, Portuguese and English. That Zubareva has created this beautiful production is a testament to her vision to “connect the dots” and render highly sophisticated art.

This album came together rather spontaneously. It was recorded as part of a live performance for mostly Russian natives in a private residence in New York in 2019. Zubareva made sure to include five Russian songs that are beloved by this community. Pianist Misha Tsiganov, originally from St Petersburg, Russia, but now a highly valued member of New York’s Latin and Jazz artist community, arranged many of these pieces with contemporary jazz harmonies. These Russian tunes also have an equally Brazilian vibe, as Irina and Misha added two brilliant Brazilian musicians to their frequent duo format, to perform as a quartet: bassist Itaiguara Brandao and drummer Portinho. The four of them created a veritable mixture of these musical traditions that is surprising and thought provoking.

Once after performing Forest Deer, an American woman asked Zubareva what kind of Jobim song it was. Zubareva replied that it was a Brazilian arrangement of a Russian song, to the lady’s surprise! It wasn’t until the 2020 quarantine that Zubareva and her husband started to think about releasing this recording. They began tinkering with the idea of making an album.

Samba Little Samba/Show de Bola is a bright and brilliant beginning. The first song was written by harmonica player Hendrik Meurkens with whom Irina has frequently performed in New York. This is a microcosm of the entire album: a brisk samba with Zubareva’s soaring voice that is elegantly paired with her virtuosic band. This number is both feel good and full of energy with a propulsive beat and a colorful piano solo. Copacabana begins with a well rendered piano introduction that sets the frame for Zubareva’s majestic singing. With the laid-back vibe, it’s hard not to imagine the scenic beach of Rio de Janeiro, as Zubareva’s scat solos across the rolling chord changes.

Just Friends is the quintessential jazz standard, and it’s good that Zubareva included this piece. If anything, this number acts as the “control” song on the album to show that Zubareva and her band can play the classics with verve and vitality. Midway through is a dazzling electric bass solo by Itaiguara Brandao, soon enveloped by trading fours with the drummer. Forest Deer has a buoyant feel. The song is written by Evgeny Krylatov with lyrics by Yuri Entin. The piece was part of a children’s movie and performed by Aida Vedishcheva. The song became one of the most well-known Soviet children’s songs and was performed by the Bolshoi Children’s Choir.

Como Se Fosse is still full of energy despite its slower tempo. The pace lets you hear Zubareva’s voice in all its colors. And the supporting chords are harmonized with elegance, creating a lush musical statement. L’dinka was written by Viktor Mikhailovich Reznikov, a Russian composer, lyricist, and singer. He wrote songs for many Soviet artists such as Alla Pugacheva and Larisa Dolina. Zubareva inhabits the piece, making it her own with the pulsing groove and her exact phrasings. Triste is a well-known A.C. Jobim classic, set to samba that welcomes you back to the beaches of Rio. I’m Beginning to See the Light starts with a terrific bass introduction, reminiscent of Jaco Pastorius, with an open groove that’s still so in the pocket. It’s on this piece that we hear Zubareva’s penchant and capacity to scat solo with fluency and emotional affect.

The remaining pieces are a rich Brazilian-Russian mélange: My Soul Has No Rest (Moey Dushe Pokoya Net), Brigas Nunca Mais, A Ra, Enredo Do Meu Samba, and I’ll Always Be With You (Ya Budu Vsegda S Toboi). This last song was written by Leonid Agutin, a famous Russian pop musician, singer and songwriter.

Nature Has No Bad Weather (U Prirody Net Plohoy Pogody) comes from a popular Russian comedy movie Service Now. The song was written by Andrey Pavlovich Petrov who was a well-known Soviet and Russian film composer.

Bridges to Rio is eclectic and entertaining, fascinating and full of surprises. Zubareva has given us something unique, rare, and unbridled. It’s been a joy for me to help produce this work. The fourteen songs on this album are a mix of Brazilian samba, American jazz, and Russian compositions. But it really helps not to even try to analyze, and to take it for what it is – great music performed by great musicians. Brava!