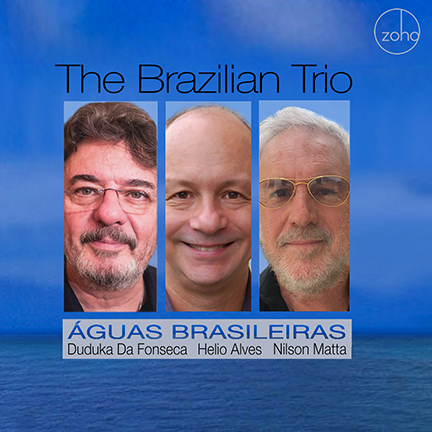 The Brazilian Trio is back! And they’ve put together something remarkable, which is both virtuosic and vividly imagined. No doubt, this is what we’ve come to expect from this incredible group of talented artists who perform together as an integrated and dynamic creative force.

The trio is composed of Helio Alves (piano), Nilson Matta (bass), and Duduka Da Fonseca (drums). Alves was born in São Paulo, Brazil and moved to New York City in 1993. He has performed with a veritable list of all-stars, from Yo-Yo Ma to Gato Barbieri. He is a prolific artist and has also released four CDs as a leader. He is widely known for his elegant and eclectic performances. Matta is one of the most celebrated bass players the world over. While living in Brazil, he performed with luminaries such as João Gilberto and Hermeto Pascoal. Since arriving New York in 1985, he has become the go-to bassist for Latin-inspired jazz. Not only is he a prolific performer and composer, he’s an avid educator, helping to instruct and shape the next generation of bassists. Da Fonseca is from Rio de Janeiro, Brazil and grew up during the golden age of bossa nova. He formed his first samba band at age thirteen and hasn’t looked back ever since. He has performed with just about everyone in the Brazilian canon, from Haroldo Mauro Jr. to the São Paulo Symphony Orchestra. After moving to New York, he collaborated with the likes of Bob Mintzer and Randy Brecker, among others. Performing on more than two hundred albums, Da Fonseca deserves to be mentioned in the dictionary under “drummer” and “maestro.”

The Brazilian Trio is known for performing beautiful music that blends Brazilian music and jazz. Águas Brasileiras (2020) is the third release of The Brazilian Trio, after it put out Constelação (2012) and their ZOHO Musicn debut Forests (2008), which earned them a LATIN GRAMMY nomination for Best Latin Jazz album. This production is a stirring and seminal work, in which each member of the trio draws upon their own crafts and, at the same time, supports each other with thoughtful accompaniments. The result is exquisite.

“Maucha na Praia” is the opening salvo of the album. It is dedicated to Da Fonseca’s beloved wife Maucha Adnet. It’s a straightforward, even simple samba that envelops you with the repeating piano melody. The cascading notes of the bridge provide contrast to the melodic line.

“Sampa 67” is a terrific song that begins with Matta’s bass, which moves from a brief solo, to a bass line, and then doubles the melody. Matta dedicated this piece to his birthplace in Brazil. Sampa is an abbreviation of São Paulo. The rhythmic interplay of the trio during the middle of the piece reveals a musical conversation in which each musician locks in with each other, anticipating and responding to what they hear, see, and feel. Matta’s unaccompanied solo is a highlight of the album, showcasing his incandescent spirit and mastery.

“Black Orpheus Trilogy” is The Brazilian Trio’s take on songs that appeared it the famous movie Black Orpheus (1959). The movie, directed by Marcel Camus, has long been celebrated for its soundtrack which included pieces such as “A Felicidade” by Antônio Carlos Jobim, and Manhã de Carnaval and Samba de Orfeu by Luiz Bonfá. The Brazilian Trio elegantly renders songs from the film’s soundtrack afresh and anew, with a well-crafted arrangement. Their version moves between the whispering of familiar melodies to the energetic and pulsating solos of Alves and Da Fonseca (with whistles throughout, played by Matta).

“Boogie Stop Shuffle” is a great get-up swing tune composed by Charles Mingus. This version uses the rhythm of Baião, which originates from Northeastern Brazil. But you can definitely hear the shuffle and swing, indicating the Brazilian Trio’s ability to perform classic jazz numbers with a Brazilian twist. When they perform familiar tunes, it’s like you are listening to them for the first time.

“Aninha” is a lush bossa nova in 3/4 that Alves dedicated to his eldest daughter. It begins with Alves’ graceful piano meditation that he performs with emotional effect. This piece is both intimate and incandescent. Indeed, the music invites us to listen to the trio as it performs material that is inspired by and dedicated to family members. You can certainly feel the love emanating from the notes, the quietness, and space. Baden was composed by Matta, and its dedicated to Baden Powell, one of the most important and legendary acoustic guitarists in Brazil. Matta had the honor of performing with the virtuosic guitarist. The coda features the famous Prelude in C Minor from the Well-Tempered Clavier by Bach that showcases The Brazilian Trio’s capacity to play classical music, and again take the familiar and render it into something novel and fresh.

“Asa Branca-Baião” is a beautiful melody by Luiz Gonzaga, known as the King of Baião, from Northeastern Brazil. The piece begins with Matta’s arco bass, which has a deep and moving resonance. Another highlight of the piece is Da Fonseca’s lyrical drum solo in which he keeps the polyrhythms moving seamlessly throughout.

The title track “Águas Brasileiras” is a stirring and reflective ballad composed by Matta. He was inspired by the Brazilian South Atlantic Ocean, and the many rivers of Brazil including the Amazon. The aquatic theme is reinforced by Da Fonseca’s marvelous brushwork, as if waves moving in and out. The twinkling of Alves’ piano evokes images of rain drops. This piece certainly flows, and that is the word that probably describes The Brazilian Trio. They and their music flows, naturally and organically.

“Manhattan Style” is Da Fonseca’s piece which he dedicated to his favorite place in the world – Manhattan, other than his native Rio de Janeiro. It’s a high tempo samba in which the trio’s interplay is on full display. The pace of this song reflects the fast-paced life in the big city. Da Fonseca is also dedicating this composition to the memory of his beloved friend, the trumpeter Claudio Roditi (1946 – 2020).

“Vila Madalena” is another work that is geographically inspired. Alves composed this piece, which is dedicated to the bohemian Vila Madalena neighborhood in his native São Paulo. It’s a lyrical and lush number in which the trio comes together, yet again, as one unified sound. Hearing this piece will make you want to visit this charming place in Brazil, as it certainly sounds like an inviting and welcoming place that is supportive of artists.

It has been a true pleasure producing Águas Brasileiras for The Brazilian Trio with Doug Davis. This trio belongs in the pantheon of Brazilian and Latin jazz. Their performances on this production are so brilliant and highly rendered that you’re swept away by their virtuosity and vitality. On Águas Brasileiras, you’ll hear three bodies, but one soul. The coming together of friends and artists has given us a magnificent musical masterpiece.