Why Wall Street should fear the next president 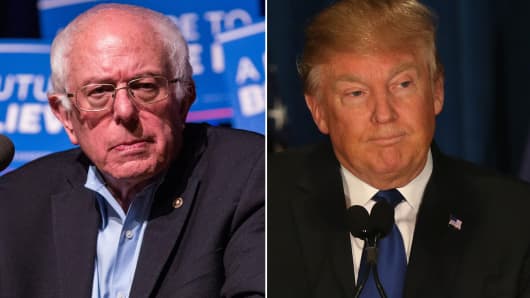 Wall Street may not realize it yet but they are going to miss President Barack Obama. When you consider what the candidates are saying about Wall Street, the financial community may even think fondly about the good old days of Obama.

Ted Cruz said that large financial institutions are “in bed with big government” and that he would never bail out failing banks. Bernie Sanders remarked, “The business model of Wall Street is fraud” and that he wants to break up the mega banks. Hillary Clinton plans to levy taxes on high frequency trading and regulate “shadow banking” institutions like hedge funds.

Here are three reasons why Wall Street should be worried about the current presidential candidates:

1) Trade: If any of the leading candidates are elected, you can kiss goodbye to free trade. Hillary Clinton, Bernie Sanders, Ted Cruz, and Donald Trump are against the Trans Pacific Partnership that would eliminate more than 18,000 tariffs and make it easier for U.S. products to compete abroad.

Historically, countries have resorted to trade protectionism during periods of economic downturn. But Obama didn’t ratchet up tariffs during the recession. Instead, he realized that we cannot hide in a globalized world and signed trade agreements like the one with South Korea. Moreover, Wall Street banks operate in many countries, so if the U.S. adopts trade barriers, other nations may counter by prohibiting American firms to conduct business in these various jurisdictions.

2) The economy: Cruz supports a flat tax that is unlikely to raise enough revenue to cover the government’s costs, and which would explode the deficit (after it has narrowed in each of the last five years) and perhaps dampen growth. Donald Trump is proposing a dramatic overhaul of the tax code. Clinton and Sanders want rich people to pay more in taxes. All of these policies would be a jolt to the status quo, which ain’t bad right now.

Obama has turned around the worst economy since the Great Depression: 9 million new jobs, 5 percent unemployment rate, 20 percent increase in business start-ups. Indeed, some things haven’t improved significantly like wage growth, and GDP growth isn’t robust. But by and large, the economy is better, and the financial sector benefits from a growing economy. Don’t forget that if Obama didn’t act decisively, the country may have slipped into depression, which could have spelled more bank failures and fewer bonuses.

3) Markets: Cruz wants to end the Export-Import Bank that subsidizes expensive products so that those in other countries can buy U.S. products. Such a plan might cut into corporate earnings and market returns. If Trump were president, he may lash out at another country on Twitter, sending their markets tumbling. Clinton and Sanders want to go after financial and oil companies. Markets don’t like uncertainty, and they have responded well under Obama. Every major index is up since he assumed office:

Americans have seen the values of their portfolios increase substantially, which benefits investment managers who levy fees based on assets under management. Buoyant markets also help underperforming asset managers hide mediocre results: As long as a customer’s portfolio is going up, they won’t be too angry. Rising markets also encourage deal making and new listings, which benefit Wall Street mergers-and-acquisition departments and stock exchanges.

Despite his tough talk, Obama hasn’t jailed bankers and has kept the carried interest-rate exemption for money managers. Yes, plenty of banks have been fined, and he instituted Dodd-Frank and the Consumer Financial Protection Bureau. But he also protected Wall Street in its time of need: He didn’t reverse the Troubled Asset Relief Program (TARP) or the AIG bailout (which benefited its principal counter party, Goldman Sachs). He has even toned down his anti-Wall Street rhetoric, which is more than you can say of those running for president.

Wall Street may not recognize how good they’ve had it until Obama’s gone.