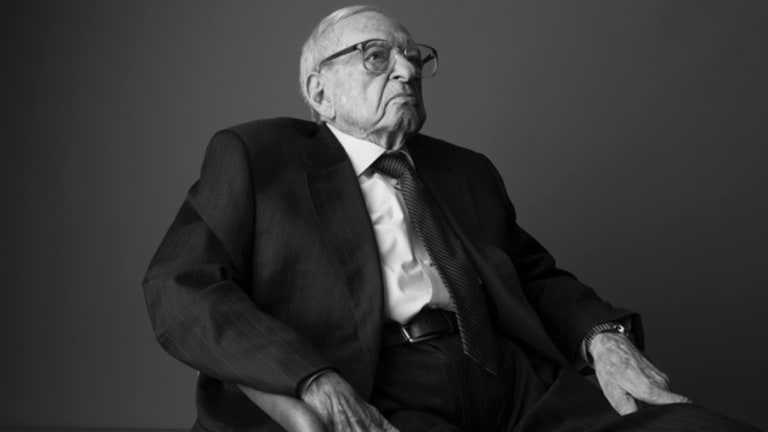 I don’t own a coffee table. But if I did, I would know the perfect book for it: The Great Minds of Investing by William Green with photography by Michael O’Brien and produced by Hendrik Leber. Measuring 9 by 14 inches, and weighing in at 4.2 pounds, it will attract attention because of its hefty size and also for its sweeping scope of value investing: “Oh, you’re an aesthete with means?”

The book is a collection of 33 profiles of top value investors in which they impart investment advice and personal wisdom. Each profile begins with an elegant black-and-white photograph, followed by Green’s clean prose, which is juxtaposed with playful callout text with ample kerning. You know — the stuff of oversized coffee table books. While thumbing through the massive work (sipping tea, of course), I gathered some useful investment advice. Here are some of the best bits, from the masters:

During the 1920s, Irving Kahn became legendary investor Benjamin Graham’s teaching assistant at Columbia University. “Ben taught me how to study companies and succeed through research … If you achieve only reasonable returns and suffer minimal losses, you will become a wealthy man and will surpass any gambler friends you have,” Kahn remembered.

When Kahn was asked what he thought was the most important investment advice, he said, “Safety. Considering the downside is the single most important thing an investor must do. This task must be dealt with before any consideration can be made for gains. The problem is that people nowadays think they’re pretty smart because they can do something rapidly. You can make the horse gallop. But are you on the right path?”

Kahn passed away earlier this year at the age of 109. He lived through the Great Depression, World War II, and plenty of bubbles, manias and panics. Through it all, he remained steadfast to the principles of value investing.

Photo above is a portrait of Kahn, taken by Michael O’Brien when Kahn was 108 years old. Photo courtesy of O’Brien.

As a junior stockbroker, Charles Brandes met Graham in 1971, when the famous value investor placed an order through Brandes for 1,000 shares of a conglomerate corporation. Brandes asked Graham for a meeting. Sure enough, they met, and Graham became an early mentor to the young broker who shortly thereafter began a career in asset management. Brandes says he learned three principles from Graham:

Stay with “fundamental analysts only, not stock market analysis.”

Focus on the long-term investment horizon; don’t heed the dizzying up-and-down motions of the market.

Concentrate the portfolio: “you have to be different from the index.”

And if you do those things, and do them well, maybe you can also buy a 54,000-square-foot estate, have Elton John perform at your wedding (perhaps his Someone Saved My Life Tonight), and collect Ferraris. Brandes lives a charmed life.

When he was a graduate student, Thomas Russo had an opportunity to hear Warren Buffett speak during a class. Russo was taken by the legendary investor’s advanced mind and plain way of speaking, so he started an asset management firm that has continuously outperformed. Russo fashioned his investment strategy on three principles that he learned from Buffett:

“Stretch your time horizon” because you only pay taxes on investments after selling.

You’ll have only 20 great investment ideas during your career.

Pick the people with whom you work carefully.

Russo explains his investment strategy, “Wall Street is flooded with hunters — people who try to go out and find the big game … I plant seeds, and then I spend all of my time cultivating them … It’s an extremely dull, very patient business.”

He certainly practices what he preaches. He has held Nestlé for 27 years and has only 19 stocks in his portfolio. They include Heineken, Pernod Ricard and Richemont.

Isabel Levy is a questioner. Before she buys a stock, she considers whether the company will be in business in 20 years. Green ascribes her proclivity to question as a French virtue, one held by the great philosopher Voltaire. It’s a skill that she’s employed while building Métropole Gestion, an asset management company that is located in Paris and that concentrates its portfolio in European securities.

Her persistent questioning lets her challenge conventional wisdom. Even though she owns many Apple (AAPL) products, she says, “[Apple needs] new, revolutionary products every year. If they miss that, they will die.” Otherwise the company will go the way of Nokia (NOK).

Levy also detests herds. She goes out of her way to do things differently from the crowd, whether it’s her choice of a book or even a vacation destination. “I want to go where there are fewer people, fewer crowds, where it’s not that fashionable,” she said. She applies the same logic to the financial market, searching for contrarian ideas. And her approach has worked, with a track record that has outperformed her benchmark.

Are You a Great Mind?

This book won’t make you a great mind, but it will make you look like one — as well as helping you glimpse the greatness of legendary investors. Finally, we have a timeless book to match the eternal wisdom of value investing.

Kabir Sehgal is the author of New York Times bestseller Coined: The Rich Life of Money And How Its History Has Shaped Us. He is also a Grammy winning producer. Follow him on Facebook and Twitter