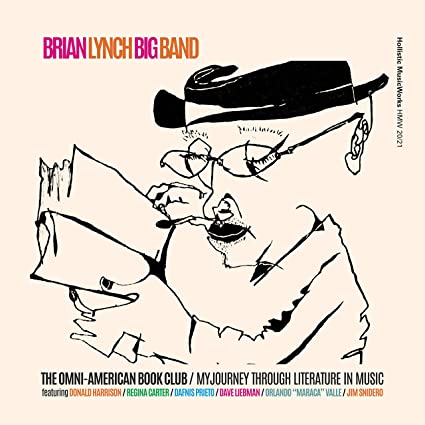 Brian Lynch is a…reader. Of course, we all know him for his musical prowess, as this exceptionally gifted bandleader, composer, and performer has toured the world, delighting audiences with his compositions and creativity. On his many journeys, not only does he have his Yamaha trumpet but a marked-up, tattered covered book. A prolific book worm, Lynch has had a lifelong interest in American literature, with an acute fascination with prominent African American authors such as James Baldwin, Ralph Ellison, Toni Morrison, W.E.B. DuBois, Ta-Nehisi Coates, and Albert Murray.

That Lynch titled his album after Murray’s The Omni Americans (1970) is a testament to the late author’s significance and well-deserved place in the pantheon of great American writers. This book is a collection of essays, which begins with an opening salvo: “Ethnic differences are the very essence of cultural diversity and national creativity.” For far too long, Murray has been overlooked, yet his life-affirming commentaries and provocative essays on culture and society are insightful and evergreen. His writings have served as a foundational philosophy for the jazz intelligentsia and aficionados alike. That’s probably because Murray was an ardent supporter and advocate for the blues and music that originated from African Americans. And because he didn’t hold any punches: “The immediate objective of the polemics in The Omni-Americans is to expose the incompetence and consequent practicality of people who are regarded as intellectuals but are guided by racial bias rather than reason based on scholarly insight,” wrote Murray in the introduction of his book. In other words, don’t let smart, seemingly sophisticated people get away with intolerance. Indeed, Murray holds up a mirror to American society and calls out the powers that be.

In spring 2019, over breakfast in Miami, Lynch and I discussed thematic ideas for his next recording project. We quickly discovered that we had been reading from the same “syllabus.” We shared an interest in American biographies, histories, and other works that revealed the character of our country. A white American from the Midwest and an Indian American from the south had found an intellectual home in the writings of Murray and other African American writers, arguably because we identified as “others” in our chosen community. Lynch has been a veritable outsider, a non-Latino, playing with the likes of Eddie Palmieri. And he has exceled in what began as, and remains in its centrality and essence, African American music. Being surrounded by people of many ethnicities and cultures, Lynch has realized the brilliance of Murray’s observation that diversity is a source of strength. And this the touchstone of The Omni-American Book Club, which draws upon many sources of inspiration. In sum, it’s a musical manifestation of the American melting pot.

It has been a privilege to produce this album with Doug Davis for maestro Lynch. I hope that that Lynch’s magnificent music inspires more to pick up the great works of America’s past masters. By understanding some of these seminal voices, we’ll develop an enhanced understanding of our nation and its people. Let’s get on the same page and begin writing the next chapter of our country together.