The Offense of the Drum 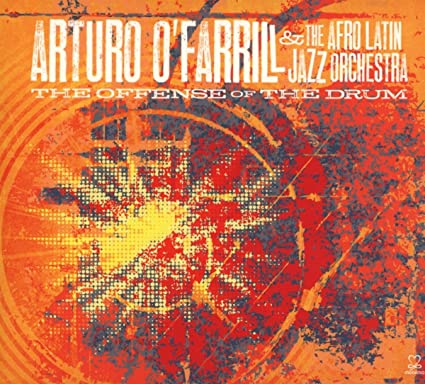 WE KNOW IT WHEN WE HEAR IT. With its clave patterns, piano guajeos, and bass
tumbaos, Afro Latin jazz is indeed the flowering of what Jelly Roll Morton called the
Spanish tinge of jazz. Yet while the roots of Afro Latin jazz are intertwined with those
of jazz, like a colony of Aspen trees, this music seems to stand alone with its own
canon, characters, and culture. We think we know this music. That’s why Arturo
O’Farrill wants to bend it.

On a brisk autumn afternoon at an Italian eatery, Arturo earnestly explained to me
his artistic vision. He eschewed the urge to create within a realm, in hopes to expand
it, to bend what the world knows as Afro Latin jazz over the acoustic horizon.
He spoke of a new form, a new sound, Música Nueva, a new direction for the Afro
Latin Jazz Orchestra. He spoke, unknowingly, about this very album, THE OFFENSE
OF THE DRUM.

Before he laid down these nine conspicuous tracks, he tinkered in his musical
laboratory at Symphony Space in New York. It was there, during the Afro Latin Jazz
Orchestra’s concert season that he heralded several Música Nueva performances
which began in 2007. At a concert entitled Latin Jazz Across the Americas, he
showcased collaborations with pianist Vijay Iyer, DJ Logic, harpist Edmar Castañeda,
and percussionist Samuel Torres. Arturo looked for more, sundry voices to advance
this new sound. He glided into the province of poets and bards with the fifth
installment of the concert series entitled Big Band Poetry Jam & Beyond. Here we
meet rhapsodizer Christopher “Chilo” Cajigas who awakens us to a reality of this new
sound – all generations are welcome, new formats are encouraged.

This expansive cast of characters, supplemented with ever more virtuosic voices, would
re-assemble years later in the studio. The commitment of these master musicians to make music with the Afro Latin Jazz Orchestra affirms not only friendships that run
deep but also a mutual recognition of talent, acumen, and virtuosity.
This album is a honeycomb in which we can place elements of a new aesthetic: an
eighteen-piece big band, harpist, turntables, and jagged-edged percussion. The
connective tissue among these seemingly disparate parts echoes throughout: the
drum. Twenty-eight types of percussion, to be exact.

THE OFFENSE OF THE DRUM spotlights percussion from almost every corner of this
world: the taiko drum from Japan, djembe from Africa, barriles and bombas from
Puerto Rico, tumbadoras from Cuba, bombos from Colombia, cajóns, maracas,
bongos, shekeres, claves, cowbells, cuicas, tambourines, timbales, and turntables.
Música Nueva may be a new direction for Afro Latin Jazz, but the centrality of the
drum remains.

1 CUARTO DE COLORES
Early in his career, Edmar performed for the first time with the
Chico O’Farrill Afro Cuban Jazz Orchestra in New York City. During the outdoor
performance, the power went out, and all you could hear was the percussion and
Edmar’s acoustic harp. A beautiful exclamation to the notion – the show must go on.
It did. And it does. Edmar’s lightning-quick hands move about the harp as if conjuring
a sonic spell. This piece is an assortment of Brazilian, Colombian, and Afro Cuban
rhythms. It is a celebration of Colombian harp, and Colombia itself. It’s a sign of
what’s to come throughout this album – musical partnerships that exemplify the
collaborative spirit of the Afro Latin Jazz Orchestra.

2 THEY CAME
What may be the first collaboration of an Afro Latin Jazz Big Band with
spoken word poetry, this is the kaleidoscopic story of Puerto Rican pride. A profound commentary of achievement and possibility in America, it begins with bomba
rhythms, mixes in hip hop and reggaeton with DJ Logic working the turntables, and
settles into a canyon deep salsa groove with Bobby Porcelli’s alto saxophone solo.
Before we enter the land of milk and honey, we must endure the terrain of struggle
that Chilo describes. This piece isn’t spoken word over music but in it. Music and verse
are integrated so that the music reinforces the meaning of the words.

3ON THE CORNER OF MALECÓN AND BOURBON
While these roads may at times run parallel, Arturo parks at the intersection of Latin and jazz. Before we get there, we drive in reverse among Cecil Taylor, Charlie Parker, Louis Armstrong, Charles Mingus, and Hamiet Bluiett, only to pause at the red light of Scott Joplin where we see a different take on the traditional birth story of Latin and jazz. We hear ragtime turning into a
montuno. Many a pianist is familiar with this metamorphosis – the right hand part of ragtime is similar to that of a montuno. It’s also worth highlighting that a brush of free jazz is featured in this piece, recognizing its historical importance.

4 MERCADO EN DOMINGO
This piece demonstrates the commitment on the part of the Afro Latin Jazz Orchestra to explore jazz in South America. We hear shades of the porro, the marching band aesthetic of Colombia, mixing with Ellington and Sun Ra. Rafi Malkiel’s euphonium solo soars, and the trades between him and Jim Seeley refract a Dixieland feel through a Colombian rhythm. In this composition, we hear a Sunday afternoon in Colombia with a marching band stomping down the street.

5 GNOSSIENNE 3 (TIENTOS)
Inspired by the Gnostic movement, Erik Satie termed a collection of his works Gnossiennes. A minimalist composer that predates the twentieth century minimalist movement, he may be suggesting that gnosis, the Ancient Greek word for knowledge, emerges upon quiet reflection. In this piece’s tranquility, the curious ear finds arabesque tones. We learn more the more we listen.
Alto saxophonist and singer Antonio Lizana’s hauntingly enigmatic sound both provokes and cools.

6 THE MAD HATTER
Vijay composed this pulsing song written in an odd meter as an ode to Arturo, the mad hatter, and the Afro Latin Jazz Orchestra. That he plucked this character from Alice’s Adventures in Wonderland is entirely fitting. Arturo has more energy than most caffeinated tyros, more ideas than a phalanx of inventors. Vijay knows of whom he writes because their friendship runs deep. They admire each other’s musicianship and have toyed with the idea of a duo recording. This song in particular is the aural manifestation of Arturo’s constant noodling, tinkering, and
experimentation.

7 THE OFFENSE OF THE DRUM
in two movements: as Oppressor, as Liberator. Growing up in New York City, Arturo remembers the many drum circles in nearby parks where
strangers and friends would unearth a communal heartbeat. The drum circle was a
prominent part of the city’s soundtrack, along with the tut-a-tut of the subway trains
underneath. Yet over time drummers were ticketed and removed, and the sound of
these rings grew faint like disappearing rain on high altitude belvederes. One person’s
liberation is another’s oppression. More broadly, the drum has taken on significant
meaning since our very beginning. It has been used as a tool of oppression, signaling
the oncoming onslaught of Napoleon’s battalions, for instance. The drum is also
an instrument of liberation as African slaves used drums to communicate and pass
on their oral tradition. In the first part of the composition, we hear the drum
as Oppressor. It begins with a dark and foreboding brass counterpoint that conveys
control, rigidity, and the oppressive nature of the drum. In the second part, we hear
the drum as Liberator. The piece ushers in a chaotic, wild celebration of freedom
found in Afro Cuban rhythms with cascading, staggered brass entrances. In this
section, we hear the entire album – every track is melodically different, but they are different story. But in this song, we hear it all.

8 ALMA VACÍA
Arturo first became aware of Miguel Blanco’s composition chops
through his work with Jerry Gonzalez. Asked if he could contribute to the Afro Latin
Jazz Orchestra’s repertoire, Arturo was expecting a flamenco-tinged, exotic delicacy,
complete with castanets, bulerías, and microtonal coros; something straight from
Iberia. Instead Señor Blanco turned in a New York inspired Salsa burner.

9 IKO IKO
This song is pure joy, the Afro Latin Jazz Orchestra version of a New
Orleans classic tune. This rendition was inspired by a concert Arturo performed with
Donald Harrison entitled, CubaNola: More Than the Spanish Tinge. Arturo and
Donald tried to prove that New Orleans very much has the spirit of a Caribbean
country. An example of New Orleans royalty, Big Chief Donald blissfully jams and
grooves with the interpretation of this iconic tune and represents fully the vitality of
New Orleans. This song is rooted in the tradition of the New Orleans second line, Afro
Cuban mambo, and Ellingtonia. The lyrics evoke spy boys of opposing tribes of Mardi
Gras Indians who set out to capture each other’s flag. Todd Bashore’s arrangement
features a get down, get past, and got it, musical conversation among soloists
Seneca Black, Donald, and Arturo.

A FINAL WORD Trying to put in words the multitudes of sounds on this album is a
difficult task, and also a joyful one. Arturo is many things: maestro, composer,
pianist, bandleader, father, son, husband, and friend. Most of all, he displays a mighty
spirit, enshrined with generosity and love. This album is as much a sacrament of his
soul – as it is a meditation on the drumbeats of life.