The Latin Side of Wes Montgomery 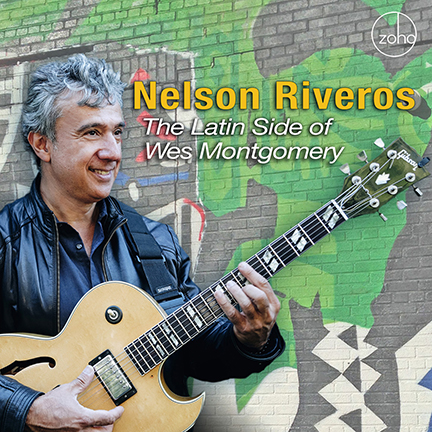 The Latin Side of Wes Montgomery
Nelson Riveros

The Latin Side of Wes Montgomery is a triumphant tribute album. It’s made by one master, in honor and celebration of another. Nelson Riveros is an acclaimed guitarist and composer who embodies the very idea of cultural fusion. Born in New York to Colombian parents, Riveros grew up learning about the music and cultures of the Americas. A few years ago, after playing a gig that involved performing songs in Wes Montgomery’s vaunted repertoire, Riveros had the idea of reimaging the legendary guitarist’s music in a Latin American style: “I started to hear all kind of rhythms, bass lines, and melodic variations to some of his tunes. The next day, I started writing arrangements, and this very project began to take shape,” said Riveros.

In making this terrific album, naturally Riveros wanted to collaborate with the very best musicians. And he did just that. He partnered with Hector Martignon (piano), a two-time Grammy nominee; Mark Walker (drums); Andy McKee (bass); Jonathan Gomez (percussion). Throughout the album, we can hear the band playing together as one, channeling the fluidness and virtuosity you will find on most if not all Wes Montgomery recordings.

Road Song is the opening salvo of Riveros’ opus. This rendition features an intro played in unison, which is actually a melodic cell that happens later in the song. The song has well placed space near the bridge so that Martignon can comp with a Latin feel, even introducing head-nodding montunos. The piece fades into a surprise ending that gives the listeners one more jolt, a reminder that the festivities continue. Tear It Down comes from Montgomery’s Bumpin’ which was released in 1965 on Verve. Montgomery’s version was a polished, straight-ahead swing number, which Riveros recast as a Brazilian Samba with Walker and Gomez adding colorful Latin percussion.

Four On Six is one of Riveros’ favorite songs of all time. He took the original bass line and turned it into a syncopated Tumbao. In fact, he first heard the Tumbao in his head before arranging the piece. Riveros studied Montgomery’s different recordings of this piece, noticing when the legendary artists played the chord hits and when he didn’t, for example. Riveros took all these elements and fused them into his arrangement, creating a wonderful collage in which the band grooves together marvelously. Wes’ Tune comes from Far Wes which was released in 1958. Riveros arranged the tune as a Colombian porro, which has a slower and more meditative tempo. It’s on this piece that Riveros shines as a soloist, spanning the fretboard with intervallic octaves and virtuosic chromaticism.

Nelson’s Groove is Riveros’ original composition, inspired by “Wes’ Tune.” The distinctive rhythms at the beginning are afoxé and baiao from Brazil. In a musical nod to Montgomery, Riveros plays mostly octaves during the bridge. West Coast Blues was on the LP The Incredible Jazz Guitar of Wes Montgomery released in 1960. Riveros arranges this seminal number into a joropo, a style from Latin America, notably Venezuela and Colombia. With its 6/8 rhythm, this piece feels like a jazz waltz, or a number that could be found at a fandango with son jarocho music from Veracruz, Mexico. Musical highlights are Jonathan Gomez’s great touch with the maracas and Riveros’ elevated virtuosity.

Jingles is the last piece on the LP The Dynamic New Sound by the Wes Montgomery Trio, released in 1959. Riveros arranges it with a brisk tempo. It begins with a snippet of melody in the intro. The bridge swells with a fiery Latin jazz groove. Martignon delivers a rousing and impassioned solo which dramatically crescendos and gives way to Riveros’ intriguing improvisation.

Facing Wes is another original composition of Riveros, set in 7/4 with a section in 5. This piece certainly feels like a blues but it doesn’t go back to the IV minor. McKee plays a beautiful bass solo in which the low register rumbles with a rich and lush sound. This piece features a Montgomery-inspired melody of octaves in the bridge. “The turnaround features the ‘Wes’ style solo chords that I so love to play,” said Riveros. That Riveros is admitting his love of certain turnaround chords reveals the respect he has for Montgomery and the depth of this magnificent musical production. Leila is the capstone number that also comes from the 1958 Far Wes album. Riveros performs this piece as a solo arrangement on his nylon string guitar, as to inhabit the piece fully and give it a softer and more mellow feel. He harmonized the melody with different chords, so the piece sounds familiar but also fresh. Here too, Riveros adds a Latin vibe with a tumbao bass feel. This selection is both intimate and revealing, borne of Riveros’ mind and performed with his total heart.

You’ve never heard Wes Montgomery’s music like this before. Master guitarist Nelson Riveros reimagines many of the legendary guitarist’s pieces with a Latin aesthetic. Not only does this music swing, but it’s syncopated, accented by percussion from the Americas. Riveros has given us something wholly unique and inviting. The Latin Side of Wes Montgomery won’t just help you rediscover the music of a veritable music legend. It will also introduce you to Nelson Riveros, a talented guitarist with a big heart who has created a superb tribute to his musical hero.