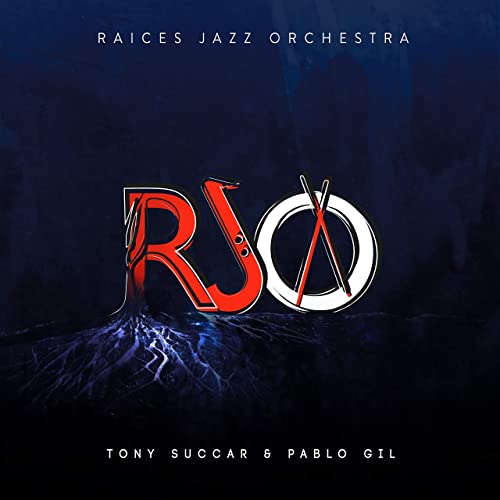 You haven’t heard something like this. This ain’t just big band meets Latin. This album casts an incredibly wide net, drawing upon musical influences from the world over and features some of the most accomplished artists on the scene today. This album is eclectic meets electric, energetic meets effervescent. It’s that good.

Raices Jazz Orchestra (RJO) is a dynamic, vibrant musical powerhouse which knows no boxes, comfortable to play a variety of forms with both virtuosity and seasoned vitality. It’s revealing that the bands name “Raices” means “roots,” as the members are linked by a common respect for the music and an uncanny ability to perform it. Like the roots of a tree, the diverse network of musical ideas found on this verdant album demonstrate an incredible level of intelligence to embark upon a project like this in the first place. A production of such brilliance speaks to the caliber of its leaders, Dr. Pablo Gil and Tony Succar. Indeed, Gil is a remarkable producer, saxophonist, composer and arranger who has released seven albums as a leader. Succar is the Multi-Latin Grammy Award winning bandleader, producer, arranger, percussionist and composer. These two have all the bases covered, so to speak. Their pairing is indeed complementary, and their collaboration is both inspiring and ascendant: Their music will put you on a higher plane. It will envelop you.

What’s unique here is that Gil and Succar have repurposed and extended the traditional big band. There is of course the full suite of trumpets, trombones, and saxophones. “On one hand, I have a love of big band as the ultimate expression of jazz. On the other hand, I want to express the musical heritage rooted in the music of the Americas and Caribbean,” said Gil. In addition, there is a remarkable percussion section led by Succar who deftly navigates the many complicated and intricate rhythms of Latin America. There’s also a full range of guest artists on this album that make the project sparkle throughout. Some of these include Richard Bona (bass), Anaadi (vocals), Jorge Glem (cuatro), César Orozco (piano), Silvano Monasterios (piano), Checho Requena (quena), Bobby Allende (percussion), Marc Quiñones (percussion), Piraña (percussion) and Leo Blanco (piano), among others. “I personally always wanted to make a big band band project because I look up to Tito Puente as my biggest inspiration,” said Succar. Now, he and Gil are inspiring the rest of us.

As for the repertoire, it draws upon and traces the roots of Latin music. What may seem like disparate pieces, styles, or modes from different countries blend seemingly effortlessly here. The take away is that we may seem like we come from different places, but we all originally emanated from the same source. We are but leaves and branches that share the same trunk. The spark of humanity is alive in everyone, and this beautiful music will activate you to feel and think in surely life-affirming way. This is the genius of Gil and Succar. They have fused different worlds into a composite, exquisite production, like a grove of Aspen trees that share the same roots.

The punchy opening drum pattern of “Raices Jam” (Tony Succar) is the beginning salvo of a piece that unfolds dramatically and dynamically. This brisk-tempo Latin jazz number has allusions to Succar’s Michael Jackson-inspired Unity (2015) which received critical acclaim. This rendition is lushly arranged for the full big band and features the irrepressible César Orozco (piano), Marc Quiñones (percussion), Bobby Allende (Percussion). “Mas Que Nada” (Jorge Ben) develops from the bottom up, with the horns doubling the bass groove, as if cementing the unshakeable fact that his number will make you move! It’s a vivid soundscape of samba funk that metamorphosizes into bossa nova with elements of Brazilian classic “Berimbau.” Brazilian artist Annadi vocalist soars above with an equal parts enchanting and enlivened performance. A thoughtful and pensive saxophone solo by Gil balances the piece so that it inhabits a full range of dynamics and contrasts. His solo indeed acts as the sonic and beautiful bridge that links the song to its explosive samba con salsa coro ending. Not without notice is the elegant horn arrangement which has elements of Willie Colon’s deft writing for trombones.

“Friendly Fire aka Spanish Tinge” (Pablo Gil, Tony Succar) is a microcosm of the entire album. At its core, this piece is a fusion of styles and subtleties that create a beautiful new sound rarely if ever heard in the big band repertoire. This is special. This is new. This is authentic. It’s a fresh take on Jelly Roll Morton’s remarks about the “Spanish Tinge” when describing the jazz of his native New Orleans. Indeed, this piece’s first section is akin to a buleria with well placed harmonics accompanied by sophisticated horns. The haunting, minor-key vocals of Esaul Quiros and Lolo Abadía draw upon musical influences from Andalucía that no doubt permeated Latin America. Cuatro superstar Jorge Glem and Latin-flamenco pianist Jorge Vera add sparkle to this unbridled and cosmic piece. “Festefuego” (Pablo Gil, Tony Succar, Tito Manrique) is both full and pure. The horn solis and lines are played together, as if one instrument, with a tut-a-tut ostinato keeping the 12/8 Afro Peruvian groove forward moving. Guest pianist Silvano Monasterios inhabits the piece fully with a well placed solo that compliments and draws out the best parts of this verdant arrangement.

“Invocation” (Bobby McFerrin) is a musical mediation in which we’re awakened by Richard Bona’s highly emotive and even ethereal vocals. His phrasings over the 12/8 bata rhythm are complemented by the cascading horn accompaniments. The piece evolves into an up-tempo number that’s reharmonized up a minor third that gravitates back to the original key. The propulsive feel of the song comes from the strong and solid percussion which was recorded in Cuba. This tune evokes obvious comparisons to Irakere and other veritable Afro Cuban all stars. Indeed, the raices of the music on this album can be traced back to Mother Africa. “Eye of the Hurricane” (Herbie Hancock) is the quintessential jazz selection, but this arrangement is an altogether getup, as if you’ve never heard the piece before. Succar and Gil make the piece fully their own with galvanizing percussion and a blistering saxophone solo in which there is an intensity of feeling that is both earnest and infectious. This piece no doubt spotlights Succar’s virtuosity of percussion. To be sure, this is Tony’s home, and we’re thankfully invited as guests to witness his genius.

“Po Oyiochan” (Tony Succar) returns us to the music of South America, with its rich exploration of Venezuelan rhythms and genres like onda nueva and joropo. Here again is Gil’s beautifully rendered saxophone solo that scoops from low to high, demonstrating the command of his instrument. Maracas player Layita delivers a standout performance, as does Henry Linares, an iconic cuatro player from Venezuela. The accented trombones build furiously through the second half of the tune into a climatic moment, followed by a saxophone soli and Rodner Padilla’s elegant and fierce bass solo. “Peru Lando” (Leo Blanco) sparkles with Checho Requena on quena, a flute made of wood from the Andes. There is a vividness to this selection, as the band gracefully moves from playing the melody in unison to performing multipart harmonies. This is the sound of precision. Everybody knows where they need to be, a testament to Succar and Gil as bandleaders. “Imprevisto” (Cesar Orozco) is a fitting capstone to this epic album. This section is an all-out burner, obviously a work by the master Venezuelan pianist and composer. That the album ends with a Latin funk piece speaks to upbeat disposition of Succar and Gil. They want to keep forging ahead, making the most magnificent of music, finding the common link – the roots – that keep us united and strong.

Like any healthy ecosystem, a band must work together to awaken the music on the page – and most importantly – in the hearts of the audience. Here we have two genius bandleaders digging deeply into the raices of Latin American music and planting this masterpiece of a production, from which a new generation of artists will surely spring and grow inspired. It has been a privilege to help both of these masters produce this project, a privilege for which I’ll always be grateful.