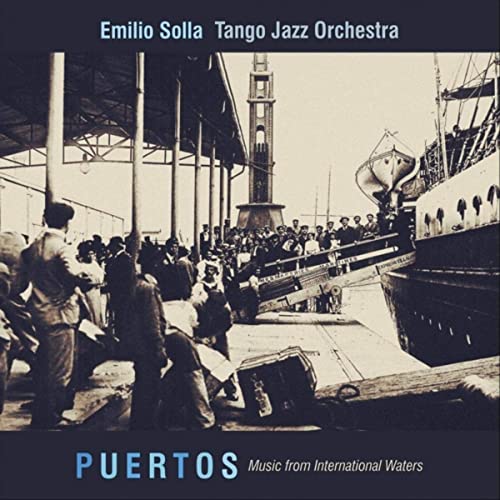 Life at sea is one of adventure, mystery, and intrigue. For most of modernity, traveling by water has been a principal pathway of migration. And tracing these routes doesn’t just yield insights into our collective history but also our musical one. When people of different countries and civilizations collide, so do their cultures, cuisines, and compositions. (And from an ecological perspective, estuaries that form from the mixing of salt and freshwater are rich with biodiversity.) And herein is the spark of Puertos: Music of International Waters: a diverse and dazzling, triumphant, and tantalizing album for “all hands” by acclaimed bandleader, composer, and arranger Emilio Solla.

“I’ve always been fascinated with how bodies of water merge as one. And especially, the role of ports,” said Solla. “It’s where people arrive and depart, and where new relationships and ideas begin.” His curiosity with voyaging by sea began when he learned about his ancestors. His paternal grandparents hailed from Spain (Galicia and Andalusia). His maternal grandparents came from Ukraine and arrived in Buenos Aires, Argentina in 1919. They rented a room in a home near the main port. Solla fondly remembers his grandparents speaking Spanish only proficiently, full of Neapolitan slang, with a Russian accent. Such a unique mix in the early twentieth century might have only been found in Buenos Aires. In fact, the cover picture of the album is circa 1920, and shows immigrants arriving here, entering a new life.

Born and raised in Argentina, Solla followed the family tradition (not of traveling by ship!) of moving countries, first settling in Spain, and then ending up in the United States. While in the US, he recognized parallels in the port cities of New York and Buenos Aires. “Both are integral to unique forms of music: jazz and tango,” he said. “Foreigners made these port cities home and, in turn, made their place in the world.”

Wanting to explore the role of ports in cultural collision, he began writing and arranging music that would invoke this theme. Puertos is Solla’s big band follow up album to his GRAMMY-nominated Second Half that was every bit of a masterpiece. Each piece on this album is dedicated to a port that has played a seminal role in the development of jazz, tango, or Solla’s creative life. That an artist has thought deeply about the geography of his craft speaks to his commitment in honoring traditions, paying homage to those who came before, rending them anew, and creating a “port” for new audiences to dock. Like his previous album, this one is a transcendent vessel.

A play on Emilio’s last name “Sol La, al Sol” plays with the “Sol” (G) and “La” (A) tones. The piece is dedicated to La Habana. With a ¾ mambo feel, it has a distinct Afro Cuban vibe, with both a propulsive beat and syncopated feel.

“Llegará…” (dedicated to Montevideo) is a resplendent odyssey, as Solla builds the introduction with layers of harmonies and rippling percussion. When the bandoneon enters, it’s as if we can see the shore of Montevideo Bay. Disembarking at the port, Arturo O’Farrill’s contemporary and jazz-infused solo awakens us to the freshness of a new place, seeing something with new eyes, and in this case — listening to tango and jazz in a manner that only Solla could have imagined. O’Farrill has made Solla’s composition a staple of his recurring Sunday night Birdland sets, so it’s fitting that the two maestros collaborated on this studio version (which Solla has remarkably taken up a notch!)

“Chakafrik” (dedicated to Benguela) is a tribute to the role Africans have played in shaping American music. Benguela is a port western Angola, where many African slaves were sent to America, in one of the worst periods of human history. “You can’t make an album with jazz and tango without recognizing the importance of Africans in the Americas,” said Solla. This piece in 6/8 is an undulating number that swells through successive choruses, recognition of how the contribution of Africans to the Americas have expanded over centuries and enhanced the world in which we live today. Todd Bashore’s remarkable alto solo is a highlight of the entire production

“La Novena” (dedicated to Buenos Aires) is an enticing and emotional experience. Solla’s melody captures the listener from the first playing on the baritone saxophone, which builds like a kaleidoscope across the reeds and horns. “I wanted to write a piece inspired by the capital city of my birth nation,” said Solla, “because it shaped my aesthetic sensibilities as an artist.” Labro’s brilliant bandoneon is a reminder of the cultural drift of international waters. Originally made in Germany in the 1800s, this instrument was played for religious and folk music. As Germans migrated to Argentina in the early twentieth century, it was being repurposed for tango music.

“Four for Miles” (dedicated to New York) is fashioned on a seeming modal progression that one could find on a vintage Miles Davis recording. “He was one of my musical heroes,” said Solla. “He never looked back.” Certainly, Miles was full steam ahead, and Solla wrote this piece that has a constant forward motion, hardly repeating the same line twice in the exact way. A resident of Brooklyn, Solla knows whereof he writes as New York has become familiar waters for the artist. And we hear him and the band fully at home with this arrangement.

“Allegrón” (dedicated to Cartagena) features Edmar Castañeda, a masterful harpist from Colombia. This port city was established in 1533 and served as a strategic location for the Spanish to export raw metals (and other lucrative wares) from the New to Old worlds. Castañeda is himself the personification of old and new paradigms, playing a traditionally Colombian instrument on jazz music. A collaboration with maestro Solla was only natural! Castañeda intersperses staccato hits with percussive strums, over lilting flutes. The composition is exquisitely crafted and arranged with aplomb, giving space to the featured soloist while also providing ballast with harmonic color.

“Andan Luces” (dedicated to Cadiz) swirls with hypnotic effect, around the melodic line until it fully catches hold, and then Solla never lets go. Located in Southwest Spain, Cadiz is part of Andalusia, where Spanish Galleons were launched in the eighteenth and nineteenth centuries. The mixing of Spaniards and natives is the most obvious of pairings that had to be acknowledged on this production. Though we often think of the Spanish as colonialists who ravaged the New World, there’s no doubt that their seafaring journeys made them nostalgic for home. This piece has a certain loneliness and somberness vibrating amidst the minor harmonic progression. It’s on this track that Solla renders his only piano solo on the album. And what a performance it is – a pensive and virtuosic meditation.

“Buenos Aires Blues” (dedicated to New Orleans) begins with a jarring ostinato that draws a sharp and even foreboding line. Such fierceness is warranted, as the port city of New Orleans was a destination for many people who were forced to be there. Africans were brought as slaves and sold in city markets, an ugly and sinful chapter of America’s checkered past that also left its mark on music. Solla invokes a blues form to evoke the historical blackness and brownness of this port, while the beat and melody’s rhythm are a clear reference to Astor Piazzolla modern tango. The escalation of horn lines builds suspense and tension throughout the piece. There’s even tautness to the saxophone soli, bracketed by the march-march of snare work. It’s only until Goss’s saxophone solo, that Solla gives the audience a moment of unvarnished swing. Julien Labro’s accordina solo accompanied by Pablo Aslan’s arco bass is a beautiful duet moment of this entire production.

“Imagine the ship company which draws curved lines that represent routes on a map,” said Solla. “The lines are the cables, and the ports are the connectors between people from different backgrounds.” Wanting to bring people together through music, Solla has also connected us to his heart, in which he leaves everything on the table. There is an emotional rawness to this recording that will burn in you for days. It has been the highest of honors to produce this album for maestro Solla with collaborators Paul Avgerinos and Darcy James Argue. Solla is one of the most brilliant jazz and tango composers and arrangers of our times. And this is his finest work yet. Bravo, maestro!