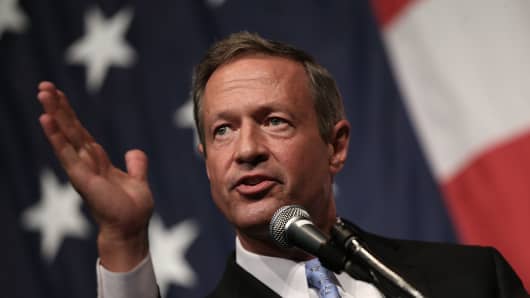 There is Hillary and Bernie. But at tonight’s Democratic presidential debate, many Americans will be introduced to Martin. The former two-term governor of Maryland and mayor of Baltimore, Martin O’Malley was an inspiration for the role of mayor in “The Wire,” the hit HBO television show. Despite launching his bid for the presidency last May, campaigning rigorously across America, and possessing a charismatic personality, he has yet to catch on, receiving less than three percent support in a recent poll. That’s why his showing at tonight’s debate is so important. He needs a performance akin to Carly Fiorina’s breakout at the undercard debate on Fox News on August 6th. “If he does not seize the opportunity to break through in this debate, then I think he’s going to have to take a step back and figure out a new rationale for his candidacy,” says Mo Elleithee, director of the Institute of Politics and Public Service at Georgetown.

O’Malley has made reducing income inequality a primary rationale of his campaign. He maintains that Wall Street stands in the way of making progress towards this goal. In an open letter addressed to the “Wall Street Megabanks,” he writes, “So here’s the bad news — for you: As President, I have no plans to let up on you.” To dramatize his point, he sang (with impressive pitch) “This Land Is Your Land” on Wall Street, earning $1.74 (and a pack of gummy bears), which was recorded in a campaign video and labeled, “How to Make an Honest Buck on Wall Street.”

I caught up with O’Malley over the weekend to better understand his Wall Street reform agenda. With Dodd-Frank the law of the land, I asked why we still need reform. “The high-risk, reckless, and illegal activities of megabanks were the primary cause of the 2008 crash, which devastated our economy and cost millions of middle class families their savings, their retirements, and their homes. One of the unfathomable challenges we face today is that we have not done enough as a country to prevent another collapse or protect taxpayers from once again being on the hook,” he said.

Throughout his campaign, O’Malley has noted the risks of financial concentration: for example, forty-five percent of the $15 trillion in assets in the financial services industry are held by just five banks.

So I asked how he would prevent such concentration from happening: “There’s no magic or mystery to how we fix this. These megabanks are too big to fail, too big to jail, too big to manage – so let’s break them up. We need true structural and accountability reforms. I propose putting in place a modern version of Glass-Steagall to prevent banks from gambling with taxpayer’s money in the first place. I would impose strict capital requirements for the largest banks and require banks that fail to put forward credible living wills,” he explained.

O’Malley would like to see banks fund themselves more through equity rather than debt, so they have more skin in the game. Even though large banks have gradually increased their capital holdings, according to BIS, O’Malley wants higher requirements: institutions with $500 billion in assets would be required to hold at least 15 percent in reserves. His campaign also notes that the Volcker rule is still too complex and easy to exploit.

I observed that Dodd-Frank already requires that banks create living wills. But his campaign has noted that the FDIC has found the wills “not credible.” O’Malley would mandate that the Fed take “remedial action” to downsize banks that don’t have credible wills. He says that we won’t see meaningful reform unless there is a “defined firewall” between Wall Street and taxpayers. “It’s only a matter of time before the middle class could be asked again to bail out a bank’s recklessness. For more than seventy years, Glass-Steagall was an effective shield. We need to act now to ensure that history does not repeat itself. Never again should the failure of Wall Street banks, which are still so big and interconnected, cause the collapse of the entire economy,” he said.

At tonight’s debate, O’Malley will bring up his Wall Street plan, in hopes that it will be pitched perfectly for Democratic voters — even if he doesn’t have his guitar.