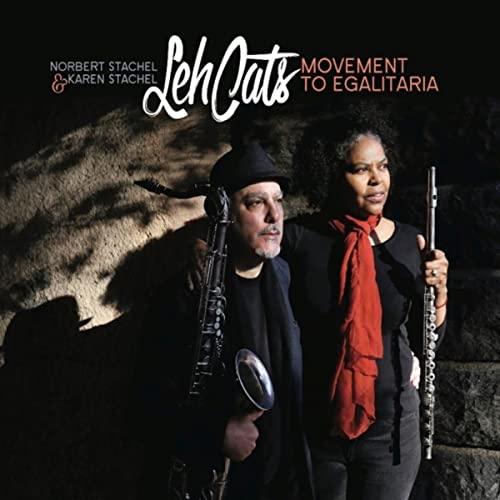 Movement to Egalitaria is a forward-looking opus which will provoke and enchant you at the same time. These eleven tracks are composed, arranged, and performed with many tones and hues, ultimately rendering a beautiful landscape, a soundtrack of what the world could be. LehCats (Karen Stachel and Norbert Stachel) have delivered a fiercely intelligent and groundbreaking production that isn’t just a musical contribution but a cultural one, in which listeners can meditate on the state of their souls. This album is indeed “aural literature” which you can revisit time after time, and you’ll hear something differently, as the rhythm and unfolding chords envelop you, from neck and shoulders, to ankle and toe. This album will move you.

The piece “The National Anthem of Egalitaria” is about a mythic perhaps utopian place where everyone can live together – no matter their ethnicities, backgrounds, origins, races, religion, or education level. It’s in this place, that everyone is equal and welcome. To be sure, this song is about hope. But hope isn’t just an imaginary place, it’s manifest in the mesmerizing music which features the likes of Yunior Terry (shekere), Karen Stachel (C and Alto flutes, piccolo), Norbert Stachel (bass clarinet, tenor and alto saxophones, ney, ocarina, surnai), among others.  “Meshugaza” mashes the Yiddish word “meshuga” that means “crazy” with “Gaza,” the area in the Middle East which has been the source of great conflict. The composers surely haven’t shied away from controversy, as they wrote this piece as an appeal to all Semitic people to realize their common ancestry. It’s their hope that in hearing this music, more will hear the commonality of harmonic language and culture, and ultimately turn away from violence and towards the path of peace. On this track, we hear the vibrant performances of Elizabeth Schwartz (vocals) Yale Strom (violin) (Elizabeth and Yale are also married), Melissa Rondon (pandeiro), and Dan Gonzalez (drums, darbuka, and djembe) among others.

“Sunshine”  The melody and lyrics came to Karen in a dream. Some people dream in prose, Karen dreams in poetry and songs. After inspiration flashed, she woke up and recorded the song.  This piece is perfectly named as it’s brought to life with a luminous piano solo by Edsel Gomez who infuses the piece with ebullience.

“Soul Cha Cha” reaches back into 1970s funk with a canyon deep groove. Composed by Norbert, he melds funk, soul, and Latin that pervaded the Bay Area. It features Peter Escovedo (guiro) and Peter Michael Escovedo (timbales and cowbells) whose performances make you want to dance away any bad feelings. Ricky Encarnacion’s electric bass lines are performed and placed with aplomb.

“Doppler Effect”  This rendition features Michael Stern on guitar. It is surely a fusion sound that draws upon Classical and Middle Eastern melodies. The piece builds gradually, as you hear many dimensions enveloping and passing you by, which yields a Doppler effect feeling. You better jump aboard this musical movement because it may pass you by. “Mopar’s Song”  also inspired by the Latin beats and grooves of the Bay Area, this piece is ultimately an honorific to the memory of Norbert and Karen’s cat Mopar, which moved with the couple from San Francisco to New York in 2002.

“Celia’s Bomba” was composed after they had watched the television miniseries “Celia” about Celia Cruz. This song bubbled up in Karen’s dream to the rhythm of the bomba. Again, after waking up, Karen recorded this magnificent piece that is woven into a bridge which Norbert wrote.  This piece features a veritable cast of musical all stars such as Axel Laugart (piano), Renato Thoms (tamborim, shaker, pandeiro), and others.  “Mandela” is an eponymous tribute to the South African leader Nelson Mandela. The piece fuses Afro-Brazilian rhythms and intriguing jazz harmonies. Stachel wrote this piece to celebrate and dramatize the fact that an honest and upright person can run a country, while also improving the lives of others.

“Goodbye Elgin Park” was composed by Norbert and arranged by Karen, who also penned the lyrics, and is about a small apartment in San Francisco where she lived. She thought of this place as a refuge, a place to heal, where she felt at home. It was a place in which she grew and ultimately outgrew.  There are homes for different stages in our life and they hold a special place in our hearts as does Elgin Park.

“9 Lives” was the theme song for a film. Indeed, the piece has a Henry Mancini vibe. Norbert reworked the piece, giving it (ahem) new life. With maestro Stachel on the case, he can rescue and enliven without compunction! “Step On It” is also a composition of Stachel’s which highlights the eccentricities of the Bay Area melting pot. The track is a personal reminder for Stachel to “step on it” and not be late to gigs or performances. With this track, he wants to send the message that it’s wise to plan ahead. But when you’re running late, that can generate an explosion of creativity and energy. Father and son team, John and Francis Benitez graced us with their talents.

Movement to Egalitaria is a line in the sand. Any jazz fusion recordings that are released in the future will be compared to this album. Karen Stachel and Norbert Stachel have delivered an epic and energetic production for the ages. They have poured their hearts and souls into creating something that will stand the test of time – not just because of its brilliant virtuosity – but because this album has vision and integrity. It stands for something.