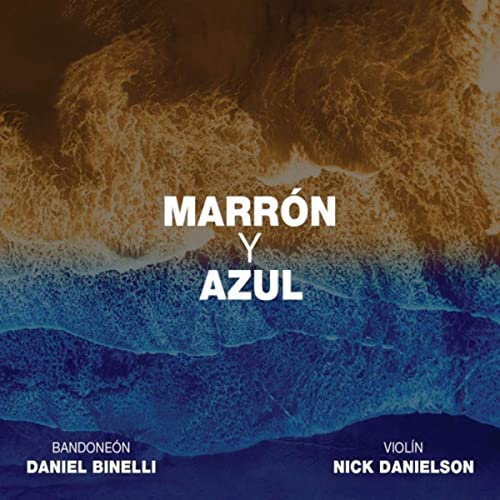 Not only is this album a virtuosic display of Tango music, it’s an elegant manifestation of
friendship. Indeed, there is a mathematical precision to its creation: 1+1 equals more than its parts. And in this case we have two number ones: maestros Daniel Binelli, a legendary Tango master, and Nick Danielson, a violinist of the highest order.

These two artists/friends have made “Marrón y Azul”, their second remarkable release as a duo, after their first one, “Nostalgias” earned a Latin Grammy nomination for Best Tango Album in 2018.

Binelli, of course, hails from Tango royalty, having joined Astor Piazzolla’s sextet in 1989 and toured across the world. He is the foremost torchbearer of the master’s music, and has appeared as soloist with the Orchestras of Philadelphia, Montreal, and St. Petersburg among many others.

Moreover, he is an acclaimed composer and arranger, having written for symphony orchestras as well as chamber ensembles, this duo included.

Danielson also has a remarkable career, a graduate of the Curtis Institute of Music where he studied with the legendary Ivan Galamian, he has gone on to collaborate with luminaries like Wynton Marsalis, Paquito D’Rivera, and Pablo Ziegler, to  name a few. He is the featured violinist on multiple Grammy and Latin Grammy winning recordings.

Every piece on this album is crafted with meticulousness and brought to life with inspiring and intrepid performances. “Fuga y Resurrección” by Binelli is an emotionally charged, evocative Tango work that shines with the duo’s rendering.

“Marrón y Azul” is a 1957 work by Astor Piazzolla made afresh by Binelli’s arrangement. The exotic “Jardines de Africa”, written in 1977 by Piazzolla and arranged by Binelli, is performed with care and without compunction. “Tango Fatal/Milonga Rea”, a composition by Carlos Franzetti, opens with melancholy and is followed by a streetwise Milonga.

“Milonga Loca”, by Piazzolla and arranged by Binelli is a virtuosic and rhythmic, even percussive seminal piece. The beautiful “Página de Buenos Aires” by Fernando Otero connotes emotion and lyricism. “Corralera”, by Anselmo Aieta and arranged by Binelli is a playful traditional Milonga from 1929 with a modern, colorful twist. “El Camino Recorrido”, another Piazzolla work from the 1970’s closes the album with
a bold, Buenos Aires inflected fugue.

It has been a privilege to produce this album with Linda Briceño for Binelli and Danielson. That these two have come together to present their epic masterpiece is reason for all of us to take note and cherish their contribution.