Legendary Poet was also a … Banker! 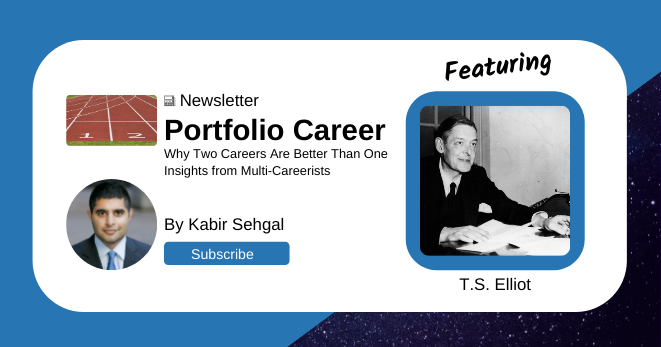 I grew up reading the poetry of Thomas Stearns (T.S.) Eliot. His poem “The Waste Land” is widely regarded as a twentieth century classic. Eliot won the Nobel Prize for Literature in 1948. His works continue to resonate, not just in high school English classes but in Hollywood. Eliot published a collection of poetry Old Possum’s Book of Practical Cats in 1939, which inspired Andrew Lloyd Weber’s hit theatrical production Cats. This was transformed into a movie that was released last year. (Yep, the reviews weren’t great, but the point here is that T.S. Eliot’s works are timeless).

The world knows T.S. Eliot as a poet. But that’s not how he sustained his early writing career. In 1917, he began a job as a bank clerk at Lloyds in London. He needed and wanted the job because his previous role as essayist and book reviewer wasn’t cutting it.

To be sure, Eliot came from a wealthy family of Boston Brahmins (who had relocated to Missouri). After starting his job at Lloyds, he wrote his mother: “I am now earning two pounds ten shillings a week for sitting in an office from 9:15 to 5 with an hour lunch, and tea served in the office…Perhaps it will surprise you to hear that I enjoy the work. It is not nearly so fatiguing as school teaching, and is more interesting.”

Eliot’s day job didn’t prevent him from pursuing his passion of writing. As Mason Currey notes in his brilliant book Daily Rituals, Eliot used his lunch hour to work on his literature. In the evening, he would write essays and book revenue (making additional income). But because he was making a decent wage with his day job, he didn’t have the intense pressure of earning a living with his literary career. His career as a banker supplemented his passion of writing.

Amen to this. When I worked in banking, I was pleasantly surprised with my income for the amount of time I spent engaging my mind. There were stretches of time that little was happening in the office. And there I was with high speed internet, free coffee, and a better-than-average cafeteria. I identify with Eliot’s journey. Not that my writing is up to his remarkable standards. But that we were both bankers and writers.

Eliot eventually got bored. After he had worked at the bank for several years, he confessed that “the prospect of staying there for the rest of my life is abominable to me.” He eventually left in 1925 to work at a publishing company, where he remained for his entire career.

The moral of the story is that some of the most celebrated artists have day jobs. In fact, some 13 percent of the Academy of American Poets work in business.

All too often we look at people who have a corporate career AND a side hustle/career/art as an oddity akin to a freakshow. Or even worse, these dual careerists are seen as not serious about their day jobs. But T.S. Eliot manged both of his careers with dexterity. Let his example inspire you to discover your own inner genius by pursuing multiple career paths.

Respond in the comments, and I’ll try to reply!

The tiger springs in the new year. Us he devours. Think at last

We have not reached conclusion, when I

Stiffen in a rented house.