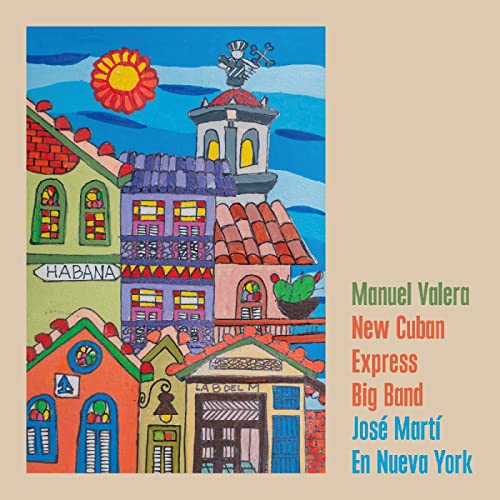 Jose Marti En Nueva York is a masterpiece. And I don’t use that word lightly. Manuel Valera is a musical genius who has crafted music that is both enlightening and entertaining, sophisticated and subtle. That Valera has been inspired by Cuba’s patron saint, Jose Marti, has given this work an epic trajectory. How can you pay homage to the patriot who symbolizes Cuban independence? With a musical work that soars in its ambition and pulses with the rhythm of freedom and liberty.

No doubt, Valera prepared for the large task at hand. He conceived and visualized this piece as an honorific of Marti but also as a reflection on the ties between the United States and Cuba. Valera began writing the music for the album as part of the Guggenheim Fellowship. And then the music took on tragic meaning. When Valera lost his wife Lisa to cancer, he threw himself into the process of crafting the music. Writing and playing music has a meditative and cathartic effect on the maestro. “Music kept me together through those very hard months,” said Valera.

Writing for a big band is no easy feat. It’s a challenge that Valera was up for, as he has long studied and enjoyed the form. He admires (and channels) Thad Jones, Bob Brookmeyer, Kenny Wheeler, Carlos Franzetti, and more. The Manuel Valera Big Band (check name TK) is a cast of veritable all-stars with remarkable vocalists such as Camila Meza (Parts 1, 3, 4) and Sofia Rei (Parts 2, 5, 6, 7). The incubator for this music was certainly Terraza 7 in Queens, New York, and it benefitted from the support of its owner Freddy Castiblanco.

What gives this project ballast is Marti’s poems. Valera based this song cycle on a book that Marti wrote during his fifteen year stay in New York as a journalist, as he helped to fund the ongoing struggle for independence in Cuba. The poems address a range of political and societal issues. For example, Part I – Poesia III is a mediation in which Valera longs to return to his home country. Part 5 – Poesia XXVI inveighs against the cruelness of the colonial Spaniards towards native Cubans. And Part 6 – Poesia XXXIX, which is arguably the most well-known, is a reflection on amity, accord, and friendship. Setting these seminal words to music was no easy feat, and Valera has delivered a gift to his native Cuba and to all who enjoy freedom and ardently defend it.

Jose Marti En Nueva York will go down as a release for the ages, one that reharmonized the poetry of patriotism into the music of a maestro. It has been a privilege for Doug Davis and I to produce this work for maestro Valera.