How I made it from Wall Street to the Grammys 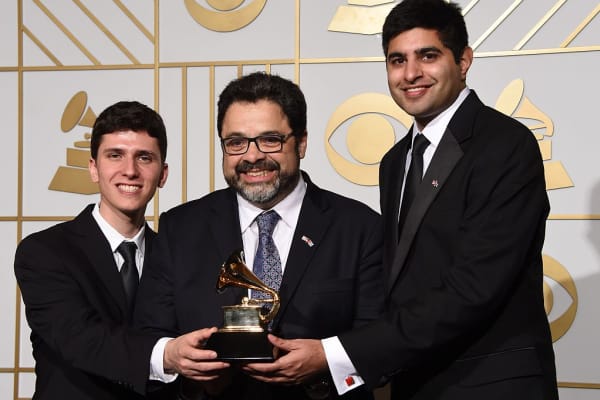 I never wanted to work at an investment bank. Because that’s where creativity goes to die — and growing up, I admired entrepreneurs, writers, and musicians.

After graduate school, I founded a start-up in India with a friend, but we ran out of money, and someone needed to get a job to cover the bills. So, I began working in the emerging markets equities group at JPMorgan in New York — and sent my paychecks to my co-founder in India.

And then, in 2008, the global financial crisis began, my company fizzled, nobody was hiring, and I was stuck on Wall Street. Instead of growing disheartened, I decided that, even though I worked at a bank, I would make it work for me.

In the eight years that I was at JPMorgan, I wrote five books, produced several albums including Grammy winners, and served in the U.S. Navy Reserve — all while being a significant revenue producer at my job.

“While my output may seem prolific, also know that I’ve forgone many things (and continue to do so), such as television, habitual exercise and chronic socializing.”

There were three keys to my strategy:

Every morning at my job, I wrote a market commentary email to my clients, which got me in the habit of writing regularly, clearly, and quickly. So much so that it was hard for me to stop writing.

During lunch, I would slip away to the New York Public Library to research for an hour for my books, and then go back to work. After the markets closed, I went home and kept on writing. Rinse and repeat the next day.

Fortuitously, my job required that I was frequently on the road, scouting investment ideas and selling deals. All the travel time provided ample time to write on planes, trains, and automobiles. My international trips even doubled as research trips for my book, “Coined: The Rich Life of Money And How Its History Has Shaped Us.”

I don’t golf or ski, typical activities for Wall Street bankers wanting to entertain clients. But I discovered several people in the industry who share my passion for composing, producing, and playing music. So I worked with these like-minded folks to gather and allocate resources to musicians who were creating culturally significant art. In May 2014, I produced Arturo O’Farrill’s “The Offense of the Drum,” which won the Grammy for Best Latin Jazz Album.

In December 2014, Arturo and I brought 58 people to Cuba (many of them Wall Street types) to make “Cuba: The Conversation Continues,” which won the Grammy for Best Instrumental Composition.

Producing music is fun, but I find composing even more rewarding. Recently, I wrote a big band jazz chart inspired by the Passover Seder ceremony; it’s no magnum opus but it enabled me to learn about another culture’s traditions.

My day job didn’t fulfill me, so I tried to find a meaningful service opportunity, and I’ve long admired those who serve our country. Therefore I sought and received a commission as a Naval Reserve officer. I don’t deserve special recognition for my service but share this example to highlight that if you’re not keen on your career, you can find meaning in part-time jobs.

How did I do all these things while thriving at work? (And by the way, I’m still in the financial-services industry, working in strategy at a global payments firm.) I had frank conversations with my managers to “judge me on my results.”

When you produce a significant amount of revenue, you can earn a longer leash. Moreover, my “outside” activities didn’t necessarily pay off financially, but they became essential to maintaining client relationships and prospecting for new business.

While my output may seem prolific, also know that I’ve forgone many things (and continue to do so), such as television, habitual exercise and chronic socializing. This may seem like a bizarre trade off — “leisure” activities for “productive” ones. But I find myself most fulfilled when I’m producing creative things.