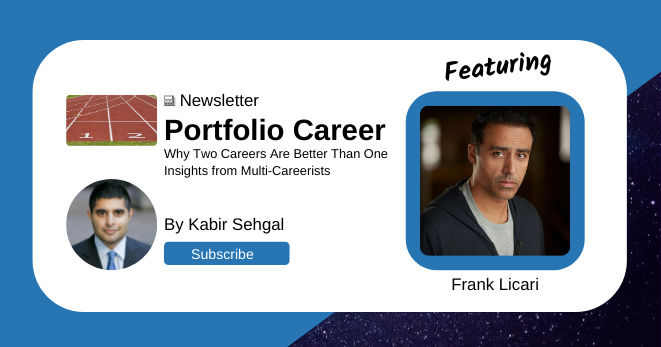 Meet Frank Licari. He is the embodiment of the Renaissance Man. He can act, direct, produce, write, sing. And he can obviously juggle! I met him through his capacity as a director. His new movie Jose Feliciano – Behind This Guitar was an official selection of South by Southwest 2020, and I interviewed him on my Quarantine Film Series. He is incredibly thoughtful in how he approaches his multiple careers, as you’ll find herein. I marvel at the high level at which he operates, and it’s a joy to see how he brings his creative worlds together to produce projects for us to enjoy.

On his motivations for having many careers

“Some of the best advice I ever got in drama college was never stop producing your own work. I took that to heart many years ago when my head told me, ‘All I want to do is be an actor.’ So, that quickly led to me becoming a playwright and forming my own theater production company in NYC. That then led me to writing, producing, and directing my own shows and allowed me to create my own creative path. I then parlayed that experience into doing the same things for the camera. It also allowed me to move into opening my own theater and performing arts school which I had for 13 years. At some point, I realized that I wasn’t just an actor, just a writer, producer, etc. I was a storyteller and it didn’t matter whether I was in front or behind the camera, on or off the stage, as long as I was telling a good story.”

On how long he’s been a multi-careerist

“I’ve been in the entertainment business in one capacity or another for 29 years.”

“Make sure that you’re really good at one first. Find that passion and master it as best you can so that you can always root yourself in that. As much as I enjoy all of the things that I get to do in my life and career, ultimately, I fall back on my skillset as an actor in almost everyone of them. It helps me think and relate differently as I navigate my way through all of the others.”

“Like many of us, we develop a gig mentality and you can sometimes feel like you’re jumping from job to job without a real plan or focus. Your brain can start to feel a little scattered and at times I feel as though I’m not excelling at any one thing but spread too thin. This, especially, becomes more pronounced if I’m working on a project where I might have to wear multiple hats. I always feel like one or more of the balls could be dropped at any moment.”

“Well, unlike when I was just an actor, where I had to rely on one source of income, now, I have a diversified revenue stream to pool from. If acting is slow, writing picks up. If writing is slow, I may be producing something or directing something. There always seems to be multiple ways for me to work which is comforting at times. It’s what’s allowed me to get through this pandemic situation unscathed thus far. I have plenty of work keeping me busy because of it. Obviously, being an actor helps you meet writers, directors, producers, and allows you to build those contacts which can sometimes help you later on down the line and vice versa.”

“It’s always been a struggle for me but thankfully, I have a wife and son who are extremely supportive. My wife came from the acting and dance world and understands my need to travel, work crazy hours, have last minute deadlines, etc. Without that understanding, I couldn’t navigate this world and would most likely have to choose to slow down or maybe even change careers and get a desk job. Every once in a while, my son gets to see his dad on TV or Film and that makes him happy and proud. That’s really all of the gratification that I need.”

On what he wished he learned earlier

“That it came with as much hustling as it does. You really do need to create your work many times and have a lot more faith and belief in yourself than someone who may have a steady focused 9-to-5. You have to be your biggest cheerleader and your biggest critic. It’s a constant mental and physical grind.”

On the stigma of multi-careerism

“There is a definite stigma in the world that you’re that ‘gig’ guy and not committed or that you’re a jack of all trades and master of none. It’s very difficult to overcome that at first, but I’ve found that work speaks for itself. My goal is to put the best possible quality content out there no matter what I’m doing. If you hire me to be an actor, you’re going to get the most committed actor you can find. Conversely, if you hire me to direct an actor, I’ll be just as committed. The key is to always do good work and be taken seriously and you find your way through it.”

On what to share with others about your multiple careers

“Whenever I respond to people in the industry as an actor, I try to keep the fact that I’m also a producer, director, etc. from them so that they don’t feel threatened that I’m going to come in and try and take over. The same goes the other way. I don’t want directors or producer contacts thinking I’m trying to get a job as an actor from them. However, sometimes, being a triple or quadruple threat is appealing to some because it shows that you have an understanding from all sides of a project and that is a definite asset.”

Day In the Life

(FYI, I’m currently in the midst of post-producing/editing three feature films, commissioned to write a novel, commissioned to re-write a screenplay, pre-producing a film festival for 2021, producing two full 1 hour podcasts/broadcasts, recording weekly voice-overs for a PSA Campaign in Florida, and putting myself on tape weekly for my acting work, while creative consulting for a record label and recording standups for my TV show which airs on PBS)

Where to find Frank

Kabir Sehgal is a Multi Grammy & Latin Grammy Award winner, as well as New York Times bestselling author of fifteen books. His latest work is Close the Loop: The Life of an American Dream CEO and His Five Lessons for Success (Hachette, 2020) with his father Raghbir Sehgal which is a Los Angeles Times & San Francisco Chronicle bestseller. Follow him on LinkedIn, Instagram, Facebook, Twitter, Spotify, YouTube.