How Eileen Sherman Thrives with Many Careers (Writer, Professor, Producer) 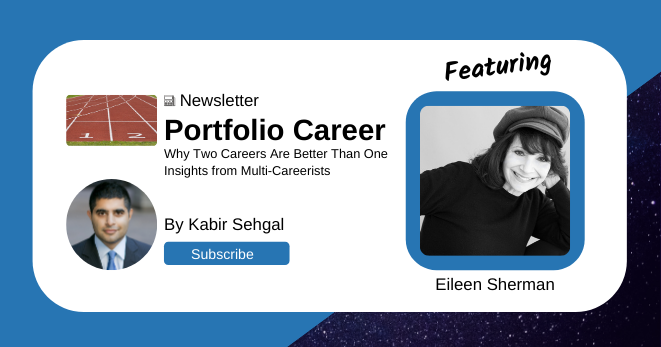 Meet Eileen Sherman. She is a maestra of the word. And by that mean, she is a tremendous author who writes for many mediums: plays, songs, books, television shows. Her adeptness as a writer and conceptualist has made her a force in the creative community. She recently released The Violin Players, an audio book in which a Jewish teenage girl is introduced to antisemitism. That Eileen is leveraging her considerable gifts to produce stories of such import reveals a creative individual who is doing good in the world. You’ll enjoy Eileen’s story below, especially how she unpacks her philosophy regarding the arts and how she finds balance in life.

On her motivations for many careers

“I married five days after I graduated college. My husband was a fulltime medical school student. While I was also earning my graduate degree in theater, I was the primary breadwinner those first three years. Any skill I possessed or could quickly learn on the job, I finessed into a paying job: drama director for a community youth group, box office manager for the University’s Performing Arts Center, tutor and advisor for high school students completing their college applications… Those early years more or less confirmed that I thrive on ‘playing many different roles.'”

“Follow your passions and be fearless…but never arrogant! Listen and observe carefully. Be ready to rework and redo when adjusting to a new professional community. Each workplace is unique, as are personalities. Working with a book editor is different than working with a college dean or a television producer… or a recording engineer. It’s your job to respect and adapt to all the different working styles.”

Multiple rejections, to less than glowing reviews, to ‘sorry, but the money dried-up, and we’ll have to cancel the show,’ are all part of the showbiz game. I have lived them all! When one ‘branch of my working world’ is on the skids, I look to another waiting in the wings. Tenacity. Optimism. Resilience. I never give up a dream; I just figure out a new way to get there. A little luck and a lot of patience are the magic charms. Talent is important, but timing is everything.”

On how her careers are mutually beneficial

“Honestly, I believe success breeds success. My first musical at Hallmark Cards’ Family theater ‘literally’ led me to writing my picture book, The Odd Potato. Chicago television (WGN) was interested in me because of the picture book. In turn, that children’s television special earned me an Emmy Award, which gave me credibility when I started producing in NYC and working with actors and directors from the Broadway community. My credentials as a young adult novelist, playwright, and producer landed me the interview to teach for Baker University’s MLA graduate program 23 years ago in Overland Park, Kansas. Every experience is a stepping stone to the next opportunity.”

“For many years, my work schedule was dictated by the needs of my young family. Also, my husband was very busy building his medical practice, and I was instrumental in that venture, as well. So…I often wrote my novels, plays, and television scripts in the ‘wee hours of the morning,’ when the rest of the household was fast asleep. (Of course, everyone knew to ‘give mom her space’ when I was racing to meet a deadline!) I did not start to produce theater and recordings in New York, or teach graduate students, until my husband and I were ‘just about’ empty-nesters. I live by my own, personal motto. ‘You can have it all; you just can’t have it all at the same time.'”

On what she wished she had learned earlier

“To be frank, I just see my career as one, extremely multi-faceted endeavor. Now, if you would like to know what I should have known earlier to be a savvier producer, more effective educator, or a wittier lyricist….well, that’s probably an interview, unto itself. Just let say, I am not afraid to ‘learn on the job,’ correct my mistakes, and brace myself for the unexpected. What I do know now? Success does not happen in a straight line!”

“Get over it; tedious tasks come with the territory. There is a great theater anecdote. The legendary John Steinbeck attended the final dress rehearsal of a young Neil Simon’s Broadway debut. Afterward, Mr. Steinbeck went up to the nervous playwright and said, “You know, after tonight, your life is going to change forever. But just remember, you still have to put your trousers on, one leg at a time.” Truthfully, the most successful people I know are the most down to earth and always ready to do the “scut work.'”

“This is a tricky one, because depending on time, place, and project, my daily routine can be quite different. In fact, if I am rehearsing and producing one of my own plays in NYC, it is a 24/7 marathon until showtime. I do not teach, write books, or take on any other professional duties. However, here is good overview of life when my world is a bit saner.”

Where to find Eileen