How Camille Zamora Thrives as a Multi-Careerist (Singer, Creative Activist) 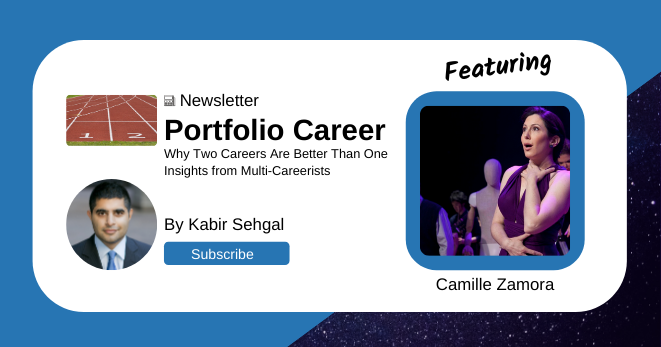 Meet Camille Zamora. She is an incredible multi-careerist who is both a singer and creative activist. She’s an acclaimed artist who tours the world (pre-pandemic) performing at many august performing arts venues. She also co-founded a remarkable organization that leverages the arts to create social good. I’m blessed to have known Camille for several years, and we recently collaborated on her terrific release If the Night Grows Dark. She is truly a standout, and her story will inspire you.

On her motivations for having multiple careers

“The motivator and throughline of all of my work is a passion for creativity, and a sense of curiosity about the creative process. I am eternally curious about how creativity works in our lives, individually and communally. The creative arts provide so many great ways to nurture what’s best in us: our empathy, our resilience, our hope. And there are few things better than creative community-building, whether through a new opera production, a vibrant mural on an abandoned wall, or a pop-up concert on a beautifully painted piano in the middle of the Bronx Grand Concourse. It’s old-school in the best sense, because it’s about real human connection.”

How long she’s been a multi-careerist

“I have been singing professionally since I graduated from Juilliard in 2004, and my nonprofit ‘arts peace corps’ Sing for Hope (founded with my fellow soprano Monica Yunus) was launched in 2006, although we’d both been working in creative activist veins for some time before that. In my hometown of Houston, I had partnered with a grassroots HIV/AIDS service organization, Bering Omega Community Services, to do bedside-care volunteering and bring soothing live musical performances to patients’ bedsides. And in New York after 9/11, Monica and I organized our fellow Juilliard students to perform for first-responders during the early days of the city’s recovery. From there, things grew organically; we weren’t alone in wanting to find new ways to use the arts for healing, learning, and harmony in the greater sense. Today, Sing for Hope has thousands of artist partners all over the world.”

“Just start! If you have a vision that inspires you, don’t hesitate and don’t overthink. The world is short on authentic passion, so if you’re really passionate about what you do, that will differentiate you and propel you forward. Early on, I was fortunate to have great mentors, and two in particular really helped me get out of my own way and take the risks necessary to bring new things to light. One early Sing for Hope champion, Joe Flom, in the wisdom of his eighty-some-odd years, used to always remind us that ‘the perfect is the enemy of the good,’ and that it’s okay not to have everything figured out before you start. And our great board member Luis Moreno always urged us to ‘fail quickly.’ He was clear that failure and mistakes are an inevitable part of the journey, so don’t be afraid of them; just pick yourself up, course-correct, and keep going.”

“It’s no secret that everyone — and certainly all performing artists — are living through one of the toughest professional moments any of us have ever experienced right now. Ringing in 2020 just ten months ago, I never would’ve thought that our whole live music industry would be on pause right now. Performing for full concert halls in late February (she is referring to symphonic pops concert Havana Nights with The Mambo Kings and Orlando Philharmonic, produced by Greenberg Artists), I could not have imagined that, two weeks later, all of my and my colleagues’ upcoming concerts would be suspended for the indefinite future — and that this would happen against a backdrop of broad-scale unemployment in nearly every sector. Such trauma and loss for so many communities. So, clearly, this is a tough, bruising moment. But it is also a moment for profound and systemic change-making, with so much hope and opportunity ready to be channeled. It’s a moment to dig deep and create.”

On how her careers are mutually beneficial

“I love a balanced diet! In a given week, I’ll toggle between practicing an aria for an upcoming album, planning Sing for Hope Piano ‘voter registration recitals’ with Jon Batiste, and leading a masterclass with amazing university students (this semester, Camille is a distinguished artist in residence at University of Arkansas’s Fulbright College of Arts and Sciences’ new RefleXions Music Series). My community initiatives inform my performance and vice versa, and the balance of the two keeps my work, and me, really heart-centered, as funny as that sounds. Being able to share music in places that can immediately benefit from a shot of hope – hospitals, refugee camps, under-funded schools, elder care facilities – connects us directly to the raw power of music, to music’s magic. And the ability to take that sense of magic onstage is what makes it all soar.”

“My friends and family are my inspiration, my laughter, my joy, and my touchstones. I meet so many different people in various aspects of my work, and I love that, but my true inner circle is small, close, and time-tested. It’s hard right now because, of course, with COVID, we can’t hop on a plane so easily to see our faraway loved ones. But during this time (which is only temporary, I keep reminding myself!), phone convos, texts, and zooms are great gifts. (Had any of us ever even heard the term zoom prior to March?)”

On what she wished that she had learned earlier

“I wish I’d ignored the folks who cautioned against doing more than one thing! When we first started Sing for Hope, Monica and I often heard from the powers-that-be that we shouldn’t be too public about our community arts work because we might be perceived as not being dedicated enough to our own musical craft. So crazy. They couldn’t have been more wrong. The sum is definitely greater than the parts!”

Where to find Camille

In collaboration with artists ranging from Yo-Yo Ma to Sting, soprano Camille Zamora has garnered acclaim for her “dramatic and nuanced” (The New York Times) interpretations of repertoire ranging from Mozart to tango. She is known for her “dignity and glowing sound” (The New York Times) in “luminous, transcendently lyrical” performances (Opera News) that “combine gentility and emotional fire” (The Houston Chronicle). Camille has performed on five continents with ensembles including London Symphony and American Symphony Orchestra, and her recent albums, The Last Sorcerer (2019) and If the night grows dark (2020), debuted on Billboard’s Classical Top Ten. She is the Co-Founder and Co-Executive Director of Sing for Hope, a global arts nonprofit based in New York City. A graduate of The Juilliard School, Camille has been recognized by the Congressional Hispanic Caucus and named NY1’s “New Yorker of the Week,” one of the “Top 50 Americans in Philanthropy” by Town & Country, and one of CNN’s “Most Intriguing People.”