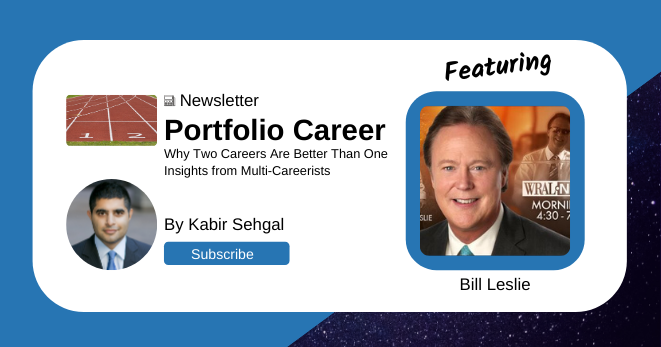 Meet Bill Leslie. He’s a multi-careerist who has worked in television and radio broadcasting. At the same time, he’s been a music recording artist who has released several albums including Storyteller. He recently retired as a news anchor from WRAL-TV in North Carolina. I’ve known Bill for many years, and he’s both wise and kind. I bet you’ll find his story below inspiring.

On why he has dual careers

“I feel compelled to do both. There’s an inner fire for each profession.”

“Forty plus years in broadcasting. I’ve been recording music professionally for 20 years.”

“Develop strong time management skills so you have time to do the things you love – the things that nourish your soul.”

“I struggled with a regional dialect early on in broadcasting but married a speech therapist who helped me out greatly in developing a more neutral accent or dialect.  I also struggled in learning to play the guitar and Celtic flute but wanted success so badly that I developed those kills pretty quickly.”

On how his careers are mutually beneficial

“Actually the two careers are intertwined. When I was a teenager I wrote a song about a girlfriend and recorded it with a North Carolina band. The song received radio airplay all over the Southeast. I became friends with various radio personalities who played my song and some friendship led to my first radio job as a news announcer. My fascination with radio grew. I majored in journalism at UNC and then went o work at stations in Norfolk, Houston and Raleigh and eventually went to work for WRAL-TV in Raleigh.”

“It’s tough. You have to pick and choose your activities. Something has to give. You can’t do everything. You have to learn to say no.”

“Just how much time it really takes to do a truly good job.”

A Day In The Life

“I recently retired from television where I was a morning news anchoring getting up at 2:30AM Monday through Friday, drinking coffee, and going to work where I would start my on-air day at 4:30AM.

I would leave the station at about 1:15PM. No traffic either way. Next I would spend an hour at the gym. Then I would be home by 2:45 and begin work on my music for a couple of hours. I have a home studio. I would have dinner with my family and the kids would tuck me in to bed at 8:00PM.”

Where to find Bill