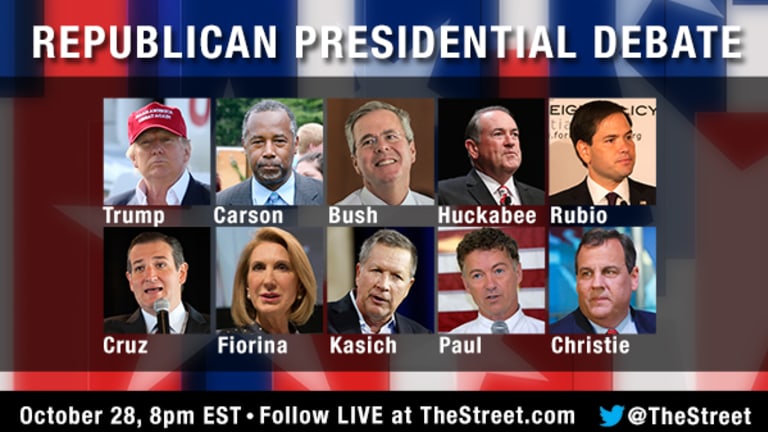 Who thought the issue of free trade would split the GOP?

The GOP candidates disagree strongly on whether the latest massive free-trade agreement, the Trans-Pacific Partnership (TPP), should become the law of the land. Before examining the differences among the candidates, let’s refresh on the terms the deal.

What Exactly Is the TPP?

The TPP is a trade agreement that was reached earlier this month among twelve countries that comprise 40% of the world’s GDP. The United States already exports a significant amount of goods to the TPP partner countries, $622 billion in 2013. Unfortunately, the exact terms of the accord haven’t been released, but we know some of the broad outlines.

First, the TPP would reduce more than 18,000 tariffs that inhibit American products abroad. For example, Japan adds a 38.5% tax on American beef; Malaysia slaps a tax of 40% on U.S. poultry; and Vietnam hits U.S. auto exports with a 70% tax. As part of the agreement, the U.S. would also cut tariffs that it imposes on imported sugar and other goods (but the Australian sugar industry is reportedly still disappointed with America’s concessions).

Second, the TPP brings several Asian countries into the United States’ sphere of influence. One of the cornerstones of President Obama’s foreign policy is his pivot to Asia, rebalancing and strengthening the U.S. military and economic priorities in the region. The TPP will more closely align the U.S. with a top ally, Japan. Already Prime Minister Shinzo Abe of Japan has heralded the TPP has a landmark deal that could boost economic growth for his country. By contrast, China is not part of the agreement, and there are hopes that this large country may join TPP in the future.

Third, the agreement comes with several regulations that affect workers, the environment, and investors. It bans forced and child labor, prohibits illegal fishing, and strengthens the rules around investor-state dispute settlements.

President Obama received trade promotion authority for the deal from Congress in June, so there is no opportunity to offer amendments. The deal is now subject to an up-or-down vote by Congress.

Where Do the Candidates Stand?

The dispute over the TPP is notable because even the official 2012 GOP platform effectively endorsed the TPP, which stated: “A Republican President will complete negotiation for a Trans-Pacific Partnership to open rapidly developing Asian markets to U.S. products.” The TPP has exposed a fissure between the mainstream and populist camps of the GOP. Let’s look at where the candidates stand:

Jeb Bush has been the republican standard bearer on this issue. He hasn’t shied away from supporting the deal. In an op-ed that he published in April, he said, “I know there is political risk in supporting free trade…This is a great deal for America. It would strengthen our ties to our allies throughout the Pacific region, including our close allies and partners in Australia, Mexico and Japan. We could use more friends, frankly. More than that, free trade is essential to creating the sustained, high rate of growth…”

Marco Rubio has also supported the TPP. In an op-ed, he even supported giving Obama fast track approval: “Once we pass Trade Promotion Authority we can finish negotiating a pact that will help build a network of Pacific economies based on competition, the rule of law and free markets.” He voted to give Obama fast track approval, too. However, he won’t express full support of the deal until he sees the details.

John Kasich is generally positive on the deal. But he also wants to see the details: “I don’t know what this thing’s gonna look like. I would favor it on the headline.” He told CBS News that TPP is “good for the U.S. not only in terms of economics but in terms of foreign policy.”

Chris Christie takes a similar position to Paul and Carson. He generally believes in free trade and says, “I’m sure we could get TPP in the kind of shape that it needs to be to be able to be a force for good in the world.” But he admits he has “no trust” in Obama when it comes to fast track approval, citing “real concerns about this president’s ability to negotiate anything that represents a great deal for America.”

Carly Fiorina believes in free trade in principal, but she is “very uncomfortable with the deal.” She criticizes the Obama administration for negotiating the deal in private (an incredibly common practice for these kinds of trade deals). She was opposed to giving President Obama trade promotion authority or “fast track.” She notes that the “devil is usually in the details…The truth is we don’t know what’s in this deal.”

Ted Cruz has noted his support for free trade in principal. He was initially in favor of giving President Obama fast track approval. But he changed his mind and was one of only five republicans to vote against it. He justified his opposition because the fast-track bill, he claims, included provisions on altering immigration laws.

Donald Trump has been the (no surprise) most outspoken candidate regarding his opposition to the deal. He tweeted on April 22: “The Trans-Pacific Partnership is an attack on America’s business. It does not stop Japan’s currency manipulation. This is a bad deal.” More recently, he tweeted on October 5 that “The incompetence of our current administration is beyond comprehension. TPP is a terrible deal.”

Mike Huckabee has expressed discontent with the deal. He said that “Once again, American workers are getting punched in the gut by Washington because this deal is a handout to insiders, interest groups, Obama’s allies and Asia.” He quipped, “When it comes to negotiating with foreign countries, the Obama Administration gets rolled like sushi.”

The next Republican Presidential debate starts at 8 p.m. ET this Wednesday, 10/28, but TheStreet.com will be covering it all week! Tune in for stories, videos, and more, and make sure to follow us at @TheStreet on Twitter for live commentary during the debate.