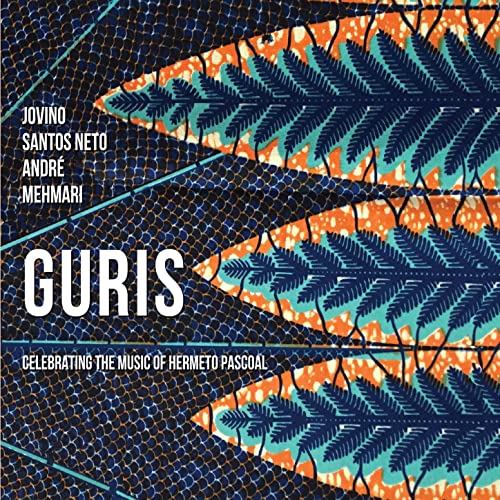 Guris is a masterful offering from Brazilian pianists Jovino Santos Neto and Andre Mehmari.  This album, featuring two of Brazil’s finest keyboard players, is a celebration of master artist’s Hermeto Pascoal’s 80th birthday.  Both pianists, and Pascoal, hold the promise of music that defies genre and lives outside of convention.  Both pianists, too, are multi instrumentalists, and have the chance to exhibit their many skills on this album. This album is a truly virtuosic offering, exhibiting the consummate musicianship of the artists.  This album features a melding of traditional Brazilian musical language with other styles that is truly unique and powerful in its rendering.

Samba do Belaqua opens the album with a joyous, playful piano solo that melds the styles of samba with hints of post modern harmonies, old fashioned stride piano, and cascading lyrical lines.  A rousing opening that brings us into Baiao da Sorte.  The second track on the album features both piano and flute, exhibiting the artist’s excellent writing and performance on both instruments.  The entire track maintains a danceable quality and an inherent, undulating rhythm and tempo.  Excellent piano playing and beautiful tone in the flute!

Bailando com Cerveja is a solo piano work that, like the opening track, brings the listener on a journey of thorough virtuosity and fluidity.  The hands work in absolute polyrhythm through the entire track, giving the illusion of perhaps more than one player or even more than one piano at times.  The styles and techniques of this work encompass Brazilian tradition, classical speed and scalar virtuosity, and jazz harmonies.  Here, the artist proves himself to be a modern-day Franz Liszt – taking a traditional Brazilian form and vernacular and bringing it to the outer extremes of virtuosity at the piano.  This track is a particular highlight of the album.

Aquela Valsa brings the jazz waltz to a new height with its Brazilian infused harmonic language – and transforms it even further into a quasi polka when the accordion comes in.  Again the virtuosity of the pianist shines through, taking bravely and swiftly on the new harmonic language and transforming the traditional waltz form into something entirely new. Bravo!

Dois Santos – Jorge e Antonio brings the energy down, but only momentarily – what begins with Chopin-esque arpeggiations transforms into a rhapsodic study on a theme that is entirely reminiscent of the late Romantic greats.  In this one, Neto departs from the Brazilian language almost entirely at times, and we might be listening to a classical pianist that is well-versed in not only the canonic Romantic piano repertoire but in interpretation of 20th and 21st century music.  Brilliantly done – this was one of my favorites!

Ingrejinha features the accordion and piano, accompanied by traditional Brazilian percussion.  The accordion takes on gorgeous drones punctuated with melismatic passages that are reminiscent of Gregorian chant while the piano expands upon these motives and pitches.  Tambo d’Osho again traverses into Lisztian waters with leaping and strident left hand accompaniment that is infused with montuno figures and salsa rhythm.  This track is beautifully effortless. Certeza brings the mood to a tranquil stillness, finding a peaceful and improvisatory ballad that is at times punctuated with post-modern harmonies.  Guris is the title track, and with good reason – it is a masterful ragtime that retains its brightness and effusive Brazilian language.  The addition of the electric guitar to play in tandem with the piano is an eclectic and pleasing touch.

Andorinhas takes on an improvisatory feel for the piano – the organic statement and development of ideas is apparent.  The writing can be quite rhapsodic and episodic, with quick departures into a new and transformed idea, and this composition is a prime example of this.  These compositions consistently keep the listener guessing!

Pro Hermeto is a lovely and respectful tribute to the great Hermeto  Pascoal, featuring guitar and piano in a playful and folky Hermeto-style duet.  An apt tribute to a truly great musician.  Jovino em Realengo is infused with playful vocalise that sound like buzzing into a trumpet or trombone mouthpiece – an unexpected turn that adds to the joy and playfulness of the piece.  We are left on a high note with Acordando os Acordes – what begins as a thoughtful ballad transforms again into a thoroughly virtuosic work.  This entire album has proven to be ripe with high octane virtuosity from beginning to end, and in virtually every genre, mood, style, tempo, and technique.  A truly great album and a hint of what is truly possible for cross genre musicians in the 21st century.  Wonderful! The virtuosity, breadth, commitment to existing outside any one genre, and utter soul expressed by both artists on this album makes for a touching, thorough, and transcendent tribute to Hermeto Pascoal.  A well done album from start to finish.