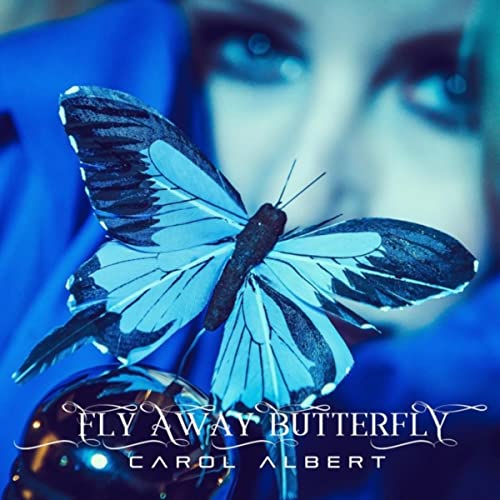 Every so often, an artist comes along that makes you reimagine the possibilities of music. With Fly Away Butterfly, Carol Albert delivers a seminal and sizzling contribution to the artistic sphere, blending lively melodies with thoughtful and refined arrangements. Every song presents not just different sounds but soundscapes in which Carol invites us to inhabit and explore.

But this album is also one of healing, as Carol lost her husband in 2014, and she turned to composing music. After her “Christmas Mystique” production, she started on this work, tackling the personal issues she has faced – and this time, head on. Throughout the opus, we hear, quite beautifully, about Carol’s stages of recovery and healing. And by so doing, she has given us something for each one of us to hold onto.

The title track “Fly Away Butterfly” evokes an ambient groove enlivened by joyful, even mirthful flutes, the soundtrack to a butterfly flying away, from this place to that. Indeed, the track is symbolic, as Carol’s voice is intimate and distant, the delicate balance of love and loss that we all must face during life. “Awakening” flows and builds with an ostinato groove, lilting flutes, and well-placed piano touches. The song is wrought with anticipation and playful exchanges that resolve to the tonic chord, a brilliant display of compositional prowess and acumen. In fact, an encounter with a Blue Morph butterfly in Costa Rica prompted her to write the tune. Perhaps unwittingly, Carol’s has given us a track for our times, to be “awakened” to the tension-and-release, call-and-response of life. That after the very worst times comes recovery and healing. And Carol’s album, listened from start to finish, can be part of a veritable music healing, enriching your soul with creative and artistic ferment.

“On My Way” is even more explicit, an anthem for our times. It’s a song of new beginnings. Her lyrics “On My Way/To a better day/I’ll spread my wings and fly away…” connote not just escapism but realism. In truth, sometimes you need an army of one to get the job done. You have to take things into your own hands. At least with Carol’s horn-drenched tune, you’ll have a musical accompaniment as you face towards the future. “Across the Sky” begins with a Coltrane-like incandescent solo with dreamy, even distant vocals. With her vocal performance, Carol has her audience hanging on every note with anticipation. “One Way” is an honorific to her late husband. “He was a great inspiration to me,” she said. Ultimately, this is a song about love and combines some of her (and presumably his) favorite elements such as acoustic piano, nylon string guitar, and a hint of Latin percussion.

In “Mas Que Nada,” the Latin rhythms pulse with fervor and give a stylistic panache to this track, as if you were listening at a dark-lit club with fire-red dancing. What’s more, Carol’s voice displays a richness and versatility of the highest order, with beautiful incantations and vocalizations. As an admirer of Latin music, Carol had me taken with this song. In a word, stunning.

“Waterfalls are all about that instant change in forward momentum, and can be powerful metaphors,” said Carol when describing the track “Chasing Waterfalls.” Her rolling piano propels the momentum of the song back-and-forth, ultimately advancing it without compunction so that we’re immersed, maybe even drenched in a sonic landscape of groove in the province of jam! “Never Thought It Would Be This Way” is a personal introspection into life when things turn out differently when expected. And ain’t that the truth. The lyrics however aren’t bitter but bittersweet, informed by a life of love and loss. “Transition” brings us back into the ambient world with watercolor harmonies and kaleidoscopic timbres cascading throughout the number. It’s about moving into new realms. And with the last track “Fly Away Reprise,” Carol sends the message that there must be a final letting go.

In this album, we hear it all, and we are better for it. Carol Albert has given us a musical testimonial borne out of the crucible of loss. We hear both resilience and grace in her music. By giving so much of herself in this music, we not only hear her, but she creates a space for us to join her on the road ahead.