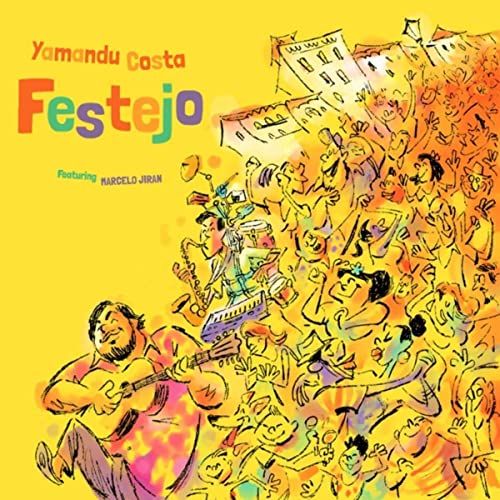 Rare is it to find an artist with such seasoned virtuosity, who is able to collaborate and blend so seamlessly with others. By now we’ve come to expect first class musical performances from Yamandu Costa, an acclaimed guitarist and composer from Brazil. In Festejo, he pairs his music beautifully with the virtuoso multi-instrumentalist Marcelo Jiran. To be sure, Jiran is a full band! Their interplay is complementary, correlative, and conclusive. Through each exquisitely composed and arranged piece, Costa and Jiran are headed in the same direction, giving each other space, and conversing in a stirring and poignant manner. In a word, this album is breathtaking.

The opening number “Bom Dia” is a salvo of what’s to come throughout the album, unbridled musicality that veers between mellow and punchy, and everything between. That the album “Festejo” means “celebration,” it made sense to begin with his particular selection. It’s an ode to the music from the Caribbean. It is upbeat, positive, and festive. The salsa feel is inviting and urges all of us to anticipate the journey on which we’re embarking. “Beliscando Gostoso” began as a composition started by Costa and eventually finished by Jiran. This up-tempo number has musical allusions to Argentina, as intricate rhythms serve as a buoy over which Costa’s guitar elegantly reverberates.

“Bolero Doce” almost feels as if it should be sung. And with Costa’s lyrical playing, this song unfolds gracefully. It’s a romantic, stirring, elegant selection that pulls on our hearts. “Porro – Suite Colombiana N. 3” is part of a larger scale suite by Colombian Gentil Montaña, whom Costa admires and respects. In fact, Montaña opened the proverbial door for Costa to learn about Colombian music, though this piece is rendered with a more Brazilian and traditional style. Costa wrote “Cuyana” when he invited Cuban musician Alfredo Rodriguez to perform in Brazil. They both wanted to include a selection in the repertoire that drew upon and blended their cultures. It begins with a propulsive salsa that evolves with an increasingly Brazilian feel. It’s a mélange of styles which is a welcome reminder of the common roots found in the music that we all appreciate.

“Adiós” is a vintage Mexican number that Costa discovered through the Brazilian guitar legend Carlos Barbosa Lima. Not only is Lima a terrific performer but exquisite arranger, and Costa fell in love with the melody, as it evokes the golden age of trios found in the coastal parts of Mexico. “Guajira a Mi Madre” is magnificent piece by Nico Rojas, the celebrated Cuban guitarist and composer. He is a lion of the Cuban guitar, and this is no doubt one of his most recognized pieces. He has a vast and prolific legacy, and Costa knew that this piece was a must for Festejo. “Bolero Negro” is a stirring, poignant selection composed by Costa. It feels like a vintage bolero, evoking halcyon days. Costa’s graceful performance is accompanied beautifully by Jiran’s percussion, piano, and woodwinds.

“Mojito” begins sweetly, with fluttering flutes and a well-placed motif that recurs through the selection. It’s the first piece that Costa and Jiran wrote together. It was the wellspring, from which the entire album flowered. The back and forth began with Costa sending Jiran the melody, with Jiran lushly arranging the instruments. It became clear that they had to create a production with a Caribbean theme. With the name “Mojito,” it’s hard not to enjoy the festive and light nature of this piece. “Porro – Suite Colombiana N. 4” is another piece by Gentil Montaña, which is an altogether different approach than the earlier selection. Costa and Jiran interpreted the Colombian composer’s music according to the styles of Northeastern Brazil such as the xote.

What’s more, “Sambolero” is written by Luiz Bonfá, an all-time great Brazilian composer. This rendition shows how the music from Brazil and Caribbean blends seamlessly. The final selection “Danzón N. 2” is by Arturo Márquez. This piece was once performed by the Simon Bolivar Orchestra, conducted by Gustavo Dudamel. In this rendition, Costa and Jiran reimagine this song, anew and afresh. It’s the capstone to a terrific and well executed project.

It’s a privilege to produce Festejo for the great maestros Yamandu Costa and Marcelo Jiran with my co-producers Kenya Autie and Yamandu Costa. Every time we producers reviewed the mix, we would be both delighted and grateful. Festejo is indeed festive, a celebration of cultures and friendship, a model for what the world needs now.