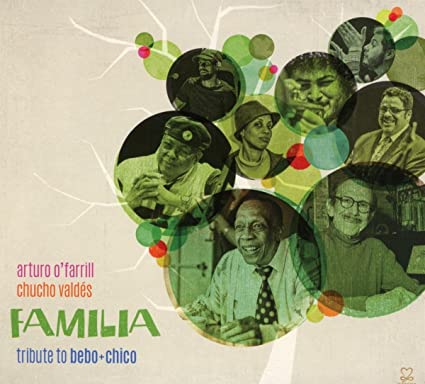 “This project is a tribute to two of the greatest musical geniuses in the history of Afro Cuban music and jazz,” said Chucho Valdés. Quite naturally, he’s speaking of his father, composer and pianist Bebo Valdés (1918-2013), and Arturo O’Farrill’s father, composer and bandleader Chico O’Farrill (1921-2001). “Bebo and Chico, with many others like Mario Bauzá and Machito, forged a new vision of this music,” Arturo said. “We want to take their vision in new directions,” he explained.

This is a recording of sons celebrating the artistry of their fathers. It’s also a reunion of musical families that have become true pillars of culture: the names Valdés and O’Farrill have come to define Afro Latin Jazz. These families share a history that goes back to the 1950s, when Bebo and Chico were musicians in Havana. Many years later, Chucho invited Arturo to perform at the Plaza Jazz Festival in Havana in 2002. “Chucho has always been a towering figure in my life not only because of his musicianship but his commitment to the people of Cuba.” At the same time, Chucho has long admired Arturo’s craft, “He has been at the leading edge for many years. He plays with a full heart and emotion.” When Chucho visited New York in 2014 to perform, he met with Arturo, and they agreed to one day collaborate on a concert and recording that honored their fathers and recognized their own children’s musical explorations.

The concerts, which took place on January 27 and 28, 2017 at Symphony Space in New York were pure joy, as the combined brilliance of two maestros had the audience dancing in the aisles. This album showcases the music of three generations: the grandfathers (and godfathers), Bebo Valdés and Chico O’Farrill; the sons, Chucho Valdés and Arturo O’Farrill; and their grandchildren, Leyanis Valdés, Jessie Valdés, Adam O’Farrill and Zack O’Farrill. This album also exhibits the full range of the Valdés-O’Farrill repertoire: six big band pieces (including original compositions), five small group numbers, and two piano solos.

This work is a dazzling display of musicality and striking virtuosity. It’s also an intimate portrait of two families. “A part of this album is a little scary because we’re inviting listeners into our living room, and that’s a vulnerable thing,” said Arturo. Unlike “Cuba: The Conversation Continues,” Arturo’s previous release, which brought two countries together through musical diplomacy, this album delves into more personal relationships, and the rich complexities of the family bond.

At the beginning of the recording session, Arturo ceremoniously acknowledged the Valdés-O’Farrill bond by taping a rare photograph of Bebo and Chico to a boom microphone overlooking the piano “station” where their sons sat back to back. This photo showed these giants beaming with pride as their sons, families, and friends rendered a musical portrait of their own, which will undoubtedly inspire the future of this music that they helped to create.

Opening with Arturo’s heartfelt cadenza and ending with Chucho’s emotive cadenza, this tune is a happy G major Haitian merengue or “Haitiano,” which conjures the celebratory spirit of this familial collaboration. “This piece is so feel-good, it’s kind of our version of The Brady Bunch theme,” said Arturo.

Arturo wrote this piece on November 25, 2016, the day that Fidel Castro died. “It was a complicated day for Cubans, Americans, for everyone,” said Arturo. This piece evokes the Cuban revolution of the mid-twentieth century and the American revolution of the late eighteenth century. He believes the third revolution is yet to come, borne of the heart, inspired by the arts, guided by the belief that we’re a global family and that if one suffers, we all suffer. This piece is the most experimental, flashing with jarring atonalism, delayed resolutions, and free improvisations.

This piece demonstrates the elegant compositional style of Bebo with a rich soaring melody, sophisticated arrangement, and lush harmonies. Chucho requested that this masterpiece be re-recorded by the Afro Latin Jazz Orchestra, which Bebo called “the greatest orchestra to ever play my music.”

Chucho composed this loving tribute to his father in a classic Latin jazz mambo style. Listening closely to Arturo and Chucho’s solos reveals different approaches and even traditions. They don’t try to play like each other, yet at the same time, are influenced by one another. During the ending cadenzas, those of us in the recording booth were shaking our heads, thankful to be on this cinematic musical journey with these master pianists and their wildly divergent but brilliant approaches.

When Arturo was nineteen, he crashed his bicycle on his messenger route. Machito, the great Latin percussionist, found Arturo and asked what he was doing there. When Arturo explained that he was trying to earn a living, Machito responded, “You’re a great pianist. I’m going to commission your father to write a piece for you to conduct.” And this is the resulting piece. Arturo defines “Pianitis” as the disease of playing the piano, of which he hopes there is no cure. “This tune is my father’s generous gift to me, and I wanted to share it with Chucho.”

“If you want to change the world, you have to behave that way around the people you see every day,” explained Arturo, so he wrote this piece to honor the men and women who surround him and Chucho. “My mother Lupa, wife Alison, and sister Georgina, have had profound influences on me.” The piece was performed with Chucho in Havana at the Plaza Jazz Festival in 2010. The song is also a tribute to the young musicians Arturo and Chucho have discovered along the way, and it features many of them. “The middle cadenza, after the second trumpet melody, by Leyanis is a high point for me,” said Arturo.

Adam O’Farrill is the best video gamer in the O’Farrill house because he has a fertile imagination and feels at home in alternative worlds. Adam titled this track after the main actions in most games: running and jumping – with himself as an avatar who must “press start to begin” the piano and bass ostinato.

Jessie and Leyanis performed this tune at La Zorra y el Cueva, a Havana club, and Arturo was deeply impressed. The title which translates to “memory,” made Arturo think about how nothing compares to playing music with your siblings. “You grow up watching your kids as five-year-olds, and then they’re adults, connecting with each other through music with shared memories,” he said. Jessie accents his exquisite piece with a vivid drum solo, tapping cymbals with flair and force.

Growing up, Zack often heard his mother asking what kind of gig his father was going to play on any given evening. She would ask if it was one of those “Gonki Gonki” gigs, after the repeated figures in the piano (also known as montunos). This piece is anything but Gonki Gonki. It’s harmonically adventurous hyper-jazz with skill at the highest level.

An aphorism which translates to “with little coconut” or “with little money.” The tune asks the question of Cubans: with so few resources, how can you do so much? “Cubans are some of the most indomitable, tireless, yet disadvantaged people in the world,” explained Arturo. “They find happiness in the company of others, with their friends and neighbors.” This track exhibits the levity and musical friendship that runs between these families.

The album’s fathers-and-sons theme inspired me to think about my father, our heritage, and the Indian-Cuban emphasis on hand-drumming. This piece is inspired by Mathama Gandhi, the father of India, and it’s an arrangement of his favorite bhajan “Raghupati Raghava Raja Ram.” This track features the brilliant Anoushka Shankar, daughter of renowned sitarist Pandit Ravi Shankar. Arturo and I have dreamed about recording in India, and the album ends with a hint of what might be our next adventure.