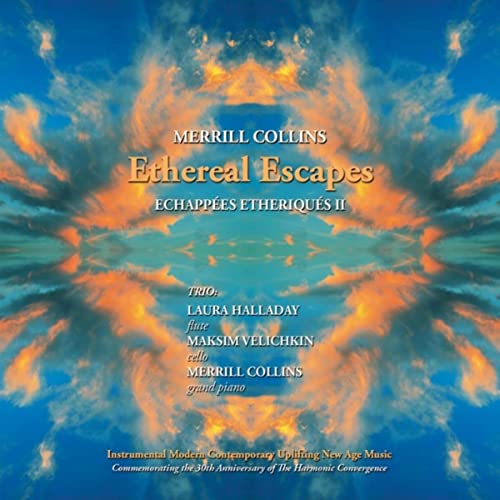 Ethereal Escapes is the musical sequel to Merrill Collins’ Echappees Etheriques.  Performed by the composer at the piano along with flautist Laura Halladay and cellist Maksim Velichkin, the album connects three stories that Collins wrote in 1987 – a time when her birthday coincided with the Harmonic Convergence, one of the world’s first globally synchronized meditation events, which also closely coincided with an exceptional alignment of the planets (August 16-17, 1987).  This production conveys the utter vastness and beauty of the ether – encompassing at once new age, contemporary, and classical styles, with the Baroque forms of unmeasured preludes and ground bass meeting a contemporary melodic language.

In our travels, we are greeted also by our musical ancestors, creating a comprehensive narrative that is equally meditative, spiritual, and melodic. Listening with our ancestors and with our timeless elders both observe a “ground bass” from the Baroque, a harmonic progression inviting instrumentalists to improvise over, at once taking on the practice of Baroque improvisation and bringing a fresh perspective.  In the bigger picture, riding on waves of gold, and our ears tingled take on the form of the Baroque unmetered prelude.   Living in harmonious worlds is a dance piece, originally composed by Baroque composer Georg Philipp Telemann.

Particles in Space is a work that strives for peace and the abolition of nuclear weapons, which, in war, can easily threaten humanity and planet Earth.  This work is a reminder that we must hold love as our basis of civilization and humanity. It is a beautiful and timeless production.